SLOVAKIA is not on most people’s radar when it comes to the production or consumption of beer. But a recent boom in reviving old breweries and launching small, new local breweries has made it a place of interest for so-called beer tourists, who are eager to travel far and wide to sample new and different flavours. Numerous plans to open new breweries and pubs across the country prove that this trend is on the rise. Thus, in addition to its abundance of wine destinations, Slovakia can add beer to its list of attractions. 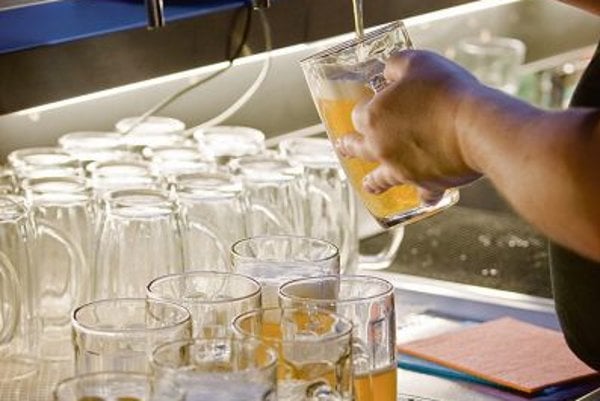 Small breweries are on the rise in Slovakia. (Source: SME)
Font size:A-|A+0

SLOVAKIA is not on most people’s radar when it comes to the production or consumption of beer. But a recent boom in reviving old breweries and launching small, new local breweries has made it a place of interest for so-called beer tourists, who are eager to travel far and wide to sample new and different flavours. Numerous plans to open new breweries and pubs across the country prove that this trend is on the rise. Thus, in addition to its abundance of wine destinations, Slovakia can add beer to its list of attractions.

“Prospects for development of beer tourism in Slovakia are very good, especially because the tourist is looking for something exceptional,” Ladislav Kovács, the vice-chairman of the Association of Small Independent Breweries of Slovakia and the director of Kaltenecker, a small brewery in Rožňava, told The Slovak Spectator. He believes that a small brewery can provide exactly this: visitors can taste special, locally brewed beers directly in the brewery while experiencing the atmosphere of the place where the beer is brewed. “He [the beer enthusiast] is walking between tanks [and] production technologies, and is watching and tasting beer directly from the tanks, while guided by a local specialist.”

According to the Slovak Tourist Board (SACR), while Slovakia has a deeply-rooted wine-making tradition, it is not a traditional destination for beer, and thus prospects for developing beer tourism in Slovakia are smaller in comparison with established countries, like Germany, Belgium or the Czech Republic, Marta Kučerová, the SACR general director, told The Slovak Spectator.

“However, during the recent past several small, private breweries have been launched, which, apart from producing and distributing beer, have also began to create tourism products,” said Kučerová, adding that they offer tours of breweries, beer bathing and beer cosmetics, along with accommodation and trips into the regions.

The Association of Hotels and Restaurants of the Slovak Republic (ZHR) also sees beer tourism as a promising direction for local gastronomic tourism.

“Nowadays thousands of tourists travel around the globe hunting for regional culinary experiences,” Soňa Hudecová, the media consultant of ZHR told The Slovak Spectator. “There are enough of those who want to get to know beer rarities and thus they ‘collect’ [experiences in] small breweries.”

Hudecová stressed that local meals and habits always play a role in this kind of tourism, thus ZHR considers beer tourism to be a promising trend which could bring to Slovakia a different clientele from those in search of spas, skiing, culture, business and other well-established activities. She added that even though the tradition of small breweries in Slovakia was disrupted (during communism, when all breweries were nationalised), it has seen a gradual revival over the last few years.

“We have so-called restaurant breweries in various corners of the country,” said Hudecová. “This means that the interest of local, but especially foreign, beer tourists is well dispersed in parts of Slovakia, which have otherwise not yet been discovered, or whose image is not so strong.”

Apart from large beer producers, like Pivovar Hurbanovo (Heineken Slovensko) and Pivovary Topvar in Veľký Šariš (SABMiller), which make up about 80 percent of the market, there are also numerous small beer producers. Ľubomír Vančo, the chairman of the Association of Small Independent Breweries of Slovakia and co-manager of the Urpiner brewery in Banská Bystrica, estimated for the Hospodárske Noviny daily that the market share of independent breweries as about 5 percent. They offer unfiltered, unpasteurised beers, yeast beers, as well as speciality ginger, vanilla, chilli, honey, fruit and coffee beers, among others.

The association was launched by four breweries: Urpiner, Kaltenecker, Golem in Košice and Perla in Banská Bystrica. Out of about 25 so-called small restaurant and craft breweries in existence across Slovakia, 12 are members of the association. Some of these breweries are quite new, established within the last few years by beer enthusiasts who grew bored with the unified flavour of beer made by large producers, or by people who view themselves as picking up where the beer-making tradition left off.

Other plans involving the launch of small breweries include Alojz Hlina’s reviving of the monastic brewery in Bratislava; and beer may be brewed again in Košice’s Cassovar. The Cassa Brewery wants to renew beer production in Cassovar after a 15-year break, according to Hospodárske Noviny. Cassovar is the name of a recently completed office development which was built on the premises of a former brewery. A restaurant brewery is also expected to open in Bojnice.

“More and more people crave a bigger variety of tastes,” Marek Olejár from the mini brewery Egídius in Poprad told Hospodárske Noviny, adding that the offerings of international breweries are almost uniform.

Actually, Vančo expects that after some time, all of the larger cities in the country will have their own small brewery.

According to Hudecová, beer tourism needs only a brewery; it does not depend on natural scenery, tourist attractions, the visual appeal of a well-known place or a historical or cultural monument.
“Any locality has, thanks to an operating brewery, a prospect for development of tourism,” said Hudecová. “When we have a look at the map of small breweries, we will really find them at various ends of the country. In western Slovakia it is worth visiting breweries in Bratislava, Trnava and Prievaly. In eastern Slovakia it has developed very well around Rožňava, Svit as well as in Košice, but most of what [there is] to taste is located in central Slovakia: in Martin, Vyhne, Banská Bystrica and Štiavnica.”

Kovács stressed that, on one hand, a small brewery has to be, to a certain extent, prepared to be able to satisfy a beer tourist, while on the other hand, visitors should not expect to see big facilities with an abundance of technology.

His experience in Kaltenecker, which has been offering tours of its brewery for several years, is that people are interested in the history of brewing beer in Slovakia, and in the production of speciality beers and unconventional flavours. He added that after touring the brewery, visitors usually end up in the local shop to buy beer or souvenirs to take home, or they go to a restaurant and order a beer which they have just tasted at the brewery.

Most beer tourists visiting Kaltenecker come from neighbouring countries like Hungary and the Czech Republic, but visitors also travel from Germany, the US, France and Japan. Kovács stressed that the tour is not led by a commercial guide, but by a brewer or [beer] quality manager of the brewery, i.e. local experts who show the technology and the premises to the visitors, and who are able to explain all aspects of the brewing process.

The Association of Small Independent Breweries of Slovakia actively supports production of beer by independent breweries and beer tourism. It has launched a website, www.pivobrana.sk, alas only in Slovak, on which it promotes the products of small and independent breweries, offers information about beer events and introduces small breweries. It also plans to publish a guide of beer routes in Slovakia within one or two years.

Volunteering persists in Slovakia, despite the challenges of pandemic