THE NEW Drama festival handed out its annual awards May 18, at the Bratislava City Theatre of P. O. Hviezdoslav. Sedem dní do pohrebu / Seven Days to Funeral, produced by the Martin Theatre, won the overall competition with special jury awards going to Jánošík 00 7 and Holocaust. 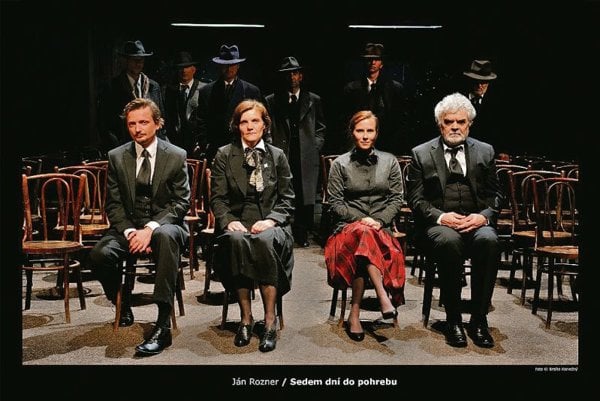 THE NEW Drama festival handed out its annual awards May 18, at the Bratislava City Theatre of P. O. Hviezdoslav. Sedem dní do pohrebu / Seven Days to Funeral, produced by the Martin Theatre, won the overall competition with special jury awards going to Jánošík 00 7 and Holocaust.

The Bratislava Audience Award went to a joint production by Studio 12 and the TUŠ Theatre for a play called 5chalanov.sk. The Student Jury award went to Róbert Mankovecký and Dodo Gombár for their play www.narodnycintorin.sk.

The festival offered a review of Slovak theatre over the past year often turning to history, sometimes serious and sometimes not, as in the mocking tone in the play about the best known Slovak hero in (Jánošík 00 7), or the parody, set in the national cemetery, of current sitcoms (www.narodnycintorin.sk).

Of course dramas about the slaughter of Slovak Jewry during World War II (Holocaust), the industrialisation in eastern Slovakia (Steel my Heart) and the dark side of the so-called “normalisation” years under communism (Seven Days to Funeral) were deeply serious.

The winning play from Martin revolves around a man’s thoughts leading up to the funeral of his wife of many years. The play – adapted by Peter Pavlac from a memoir by Ján Rozner – is a reflection on the years of hope followed by repression under the communist regime before and after the crackdown by Warsaw Pact armies in 1968. However, more than a graphic description of the turbulent times, the drama is a moving story of an insider trying to make the best of a rapidly-disintegrating society. The play, like the book, uses real names of real people, which gives it an enhanced sense of authenticity.

The annual New Drama festival, with its many workshops, lectures, discussions and accompanying events, offered a wide-ranging look into the latest developments of the national drama scene and also provided English subtitles for all the plays.