A LUNCH without soup would be unthinkable for Hungarians, said Csaba Balogh while pouring his sour cherry soup into a hand-painted porcelain bowl made in Herend, by a Hungarian producer of porcelain products which can include Queen Victoria among its roster of notable customers. Hungarian cuisine has more than 100 types of soup, and sour cherry soup is often served cold as a summer delicacy, the Hungarian Ambassador to Slovakia explained, while Ágota Hetey, his wife, arranged the plates adorned with colourful flowers and butterflies.

Related: Hungarian cuisine I Main dish I Dessert I Other cuisines 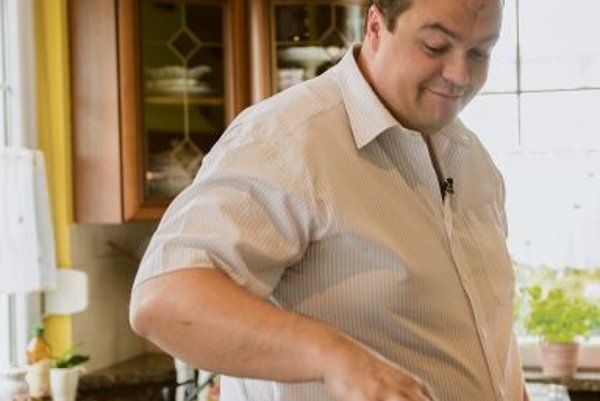 “Gastronomy is a very important part of Hungarian culture and identity,” Balogh said shortly before he started working on the Budapest steak, which requires good-quality beef as well as goose liver, one of the symbols of Hungarian cuisine, adding that the dish is suitable for special family occasions and festivities.

Since Hungarians traditionally eat a three-course lunch or dinner, Hetey prepared for the Cooking with Ambassadors programme a dessert of cottage-cheese balls with strawberry icing, which are very popular among Hungarian families, to complete the menu. Hungarians eat a lot of cottage cheese in different forms, Balogh explained, and Hetey added that she is passionate about the Slovak national dish, bryndzové halušky, which is made from sheep’s cheese.

When asked about Hungary’s national dish, Balogh said that “it is of course goulash” and readily offers the history of the internationally known dish: “We can go back to the 14th and 15th century, when the long-horn cow became the most important export product of Hungary”. The livestock was taken as far as Poland and France by cowboys, called gulyás in Hungarian. While on the road they would prepare their food in a “bogrács”, a special pot placed over a fire, using whatever was available to them: beef, seasonal vegetables and potatoes.

“Goulash today has a different taste if prepared in a kitchen, and is different if prepared over a fire,” Balogh said, adding that today it is often prepared more like a soup, which is lighter than the rather heavy traditional goulash. “But today I think in Europe almost everyone knows what goulash is.”

Slovakia and Hungary have quite a number of dishes in common and, according to Balogh, it is rather difficult to tell if there are any significant differences: “But we can definitely say that some dishes came from Slovak cuisine to Hungarian kitchens and vice versa.”

“If I go to a restaurant here in Slovakia, I eat like at home,” Balogh said. “I think that if somebody from Slovakia goes to Hungary, they can find the tastes and smells from their homeland.”

According to the Hungarian ambassador, since the Carpathian basin was such a major transit corridor in Europe, from east to west and north to south, Hungarian cuisine absorbed many culinary influences from its neighbours, and even some from more distant nations, too. One can find influences from the Balkans and Turkey, said Balogh, explaining that Turkish sweets, among others, have made their way into Hungarian cuisine. The ambassador also mentioned cabbage, which originally came from Turkey, and which became quite popular in Hungary and the surrounding region.

“From the west, mainly from Austria, we have adopted the café culture and pastries, or for example, Wiener schnitzel, which is also a very popular dish in Hungarian households,” Balogh said.

The ambassador went on to explain that differences between the cuisines of territories populated by Hungarians, for example in Transylvania, where it has absorbed more eastern influences, “contributes to the richness of Hungarian cuisine”.

While offering a glass of Egri Bikavér, Hungary’s widely known red wine, which goes well with the Budapest steak, Ambassador Balogh explains that Hungary is a big wine country, adding that he has noticed in Slovakia a growing inclination toward wine culture.

Yet, Hungarian cuisine, too, is evolving, and many Hungarians are now becoming more health conscious in their eating habits, the ambassador says. He adds that Hungarians also enjoy going to restaurants, and that as part of a nation-wide campaign, a considerable number of restaurants offer their dishes at half of the regular price on the last Thursday of February, in order to show ordinary people who do not frequently go to the restaurants different ways to prepare typical Hungarian dishes.