The Crisis Staff on Tuesday, June 4 announced a state of emergency for Bratislava’s Old Town district due to the continued rising of the level of the Danube River. 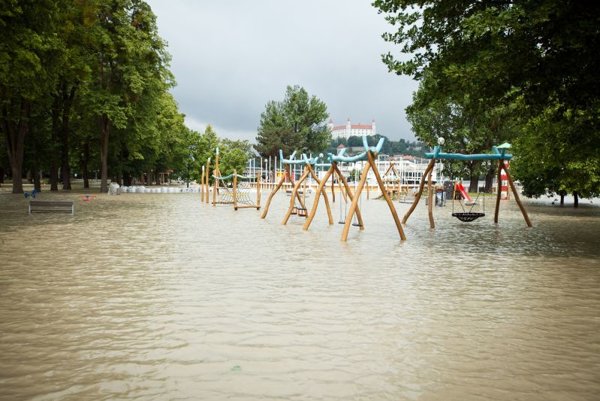 The Crisis Staff on Tuesday, June 4 announced a state of emergency for Bratislava’s Old Town district due to the continued rising of the level of the Danube River.

“During this emergency situation, work to save lives, property and protection of health will be done. The Old Town calls on citizens to obey the instructions and recommendations of authorities coordinating preventive measures and rescue work,” the borough’s spokesperson, Tomáš Halán, informed the media. He added that while there is no immediate threat, he was still calling on citizens to take all the necessary preventive steps. Halán also called on inhabitants in the zone bounded by the streets Panská, Laurinská, Dunajská, Klemensova, Dostojevského rad, Šafárikovo Square, and the Ludvik Svoboda Embankment to check their cellars, basements and ground floors, due to the rising level of groundwater. As of Monday, the district has closed the streets adjacent to the Danube embankment.

In the borough of Devín, police closed the Slovanské Embankment, as there is water on sections of the road lining the embankment. The entire road connecting Devín with Bratislava is expected to be closed in the afternoon, the SITA newswire wrote.

On the Petržalka bank, the Tyršovo Embankment is already under water. In Bratislava the Danube rose to 870 centimeters in the late morning, according to the Sme daily. Playgrounds and the summer beach are under water, which has reached the barriers in front of the Aréna Theatre. The flooding is expected to crest sometime between Wednesday and Thursday, when the level could exceed ten metres. In Devín, the level is expected to reach 940 to 980 centimeters on Thursday, June 6.

At 13:00, Bratislava Mayor Milan Ftáčnik announced a state of emergency for the whole area of the Slovak capital.

(Source: SITA, Sme)
Compiled by Zuzana Vilikovská from press reports
The Slovak Spectator cannot vouch for the accuracy of the information presented in its Flash News postings.