AS A RESULT of the heavy rain that hit Europe over the past few days, several countries, including Slovakia, now face the threat of flooding. The level of the Danube River in Bratislava exceeded 900 centimetres on June 4, which triggered a third-degree flood warning. The river is expected to continue rising, with the Slovak Hydrometeorological Institute (SHMÚ) expecting it to crest on June 6. In addition to the Danube, the level of the Morava River near Devínska Nová Ves also rose, exceeding 740 centimetres on June 4. Bratislava mayor Milan Ftáčnik has already declared a state of emergency for the whole city of Bratislava, the SITA newswire reported. 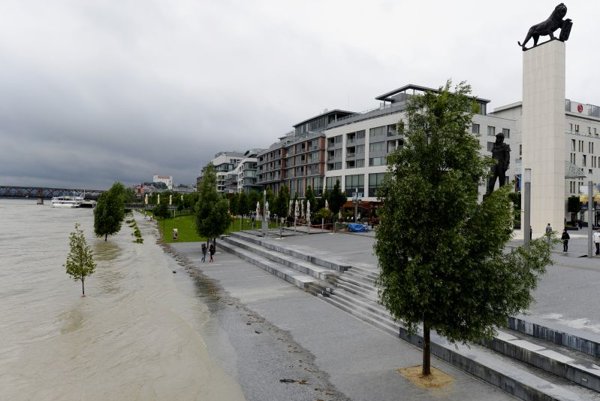 AS A RESULT of the heavy rain that hit Europe over the past few days, several countries, including Slovakia, now face the threat of flooding. The level of the Danube River in Bratislava exceeded 900 centimetres on June 4, which triggered a third-degree flood warning. The river is expected to continue rising, with the Slovak Hydrometeorological Institute (SHMÚ) expecting it to crest on June 6. In addition to the Danube, the level of the Morava River near Devínska Nová Ves also rose, exceeding 740 centimetres on June 4. Bratislava mayor Milan Ftáčnik has already declared a state of emergency for the whole city of Bratislava, the SITA newswire reported.

The Bratislava magistrate made the declaration after emergencies were declared in Devín, Karlova Ves and the Old Town city boroughs. The state of emergency might last until the end of the week, the TASR newswire reported.

“All members of the Bratislava Crisis Staff are on constant alert and the city is coordinating the operation of staff in the flood-stricken city districts, and is collaborating with state administration institutions and state security forces,” said head of the crisis staff Ľubomír Andrassy, as quoted by TASR.

Ftáčnik added that the situation has not yet reached a critical stage in terms of posing a threat to security, property and people’s lives, TASR reported.

The last time Bratislava was at risk for flooding was in 2002 when the Danube’s level reached 991 centimetres. The SHMÚ now expects that the water could reach more than 1,000 centimetres, SITA wrote.

The situation is currently at its most serious in Devínska Nová Ves, Devín, Karlova Ves, Petržalka and the Old Town city districts. The water has already flooded the whole Tyršovo Nábrežie on the Petržalka side of the Danube, the Sme.sk website reported.

Water managers have begun installing the new anti-flood system, worth nearly €33 million, whose preparation lasted from 2005 to 2010. The system includes modular flood barricades, which have already been erected in Devín, Karloveská Creek, near Šafárikovo Square, on Tyršovo Nábrežie and on Viedenská Cesta, SITA wrote.

The relevant authorities expect that the system will be able to protect the area from being inundated with water.

“We are prepared to fight the water on the level at which it was in 2002,” said Prime Minister Robert Fico, as quoted by SITA.

The water managers also want to regulate the increasing level of the Danube by sluicing the water to the river’s previous course.

The Defence Ministry will provide 353 professional soldiers to help, as well trucks, helicopters and boats, TASR wrote. Firefighters are also prepared to help if necessary, and have already set up anti-flood barricades and pumps. Moreover, fire brigades from Malacky, Žilina and Humenné have sent firefighting equipment to Bratislava, SITA reported.

The weather has also affected Slovakia’s transport system. The Viedenská Cesta and the Tyršovo Nábrežie were closed on June 3 at around 10:00. The representatives of Devínska Nová Ves closed the Freedom Cycling Bridge on the same day at 15:00. Moreover, Devínska Cesta had to be closed on June 4 at about 12:00, with the mayor of Devín, Ľubica Kolková, warning the inhabitants of flooding. She said the road may remain closed for about two days, with the necessary transport provided by the army, TASR reported.

Austrian police announced they plan to close the border crossing on June 4 at 20:00, SITA wrote.

Several trains arriving from the Czech Republic and Germany were also late, with delays of up to 60 minutes on June 4, TASR wrote.

The increasing level of the Danube has also affected river transport. The State Navigation Administration (ŠPS) stopped river transportation on the Danube at around 18:00 on June 3, the company’s spokesperson Jana Vadkertyová said, given that some passenger ships might not be able to clear the Prístavný Bridge when sailing under it. Ships will remain docked in the Bratislava port.

In addition, the entrance to the shipyard in Komárno was closed, Pavol Virág, from the Slovak Water Management Company (SVP), told SITA on June 3.

Also other Slovak regions in danger

In addition to Bratislava, several districts in Trnava and Nitra Regions also prepared for possible flooding. The level of the Danube in Medveďov reached 740 centimetres on June 4, while in Štúrovo it stood at 541 centimetres and 632 centimetres in Komárno, which corresponds with a second-degree flood warning, TASR reported.

The crisis staff for the Dunajská Streda district planned to meet on June 4 at 14:00 in Gabčíkovo. Though the situation is not critical at the moment, the members of the staff want to discuss preparations for the following days, Richard Kmeť from the district office in Dunajská Streda told SITA.

Fire brigades will be placed along the entire river basin of the Danube, as well as around the Morava, Little Danube and Low Váh rivers. The vehicles will be equipped with rescue boats, pumps and other rescue equipment, TASR wrote.

The SHMÚ has meanwhile issued a first-degree rain warning in the north and north-east of the country, and a flood warning for the districts of Liptovský Mikuláš, Námestovo, Tvrdošín, Dolný Kubín and Čadca. A first-degree flood warning has already been issued in connection with Polhoranka River, whose level reached 111 centimetres in Oravská Polhora, TASR wrote on June 4.

The increasing water levels are also affecting other countries in central and western Europe. In the German city of Passau the Danube River reached12.66 meters, instead of the usual 4.5. In Austria train transport was interrupted and more than 100 roads were closed. Both countries also had to close schools, Sme wrote.

Flooding in the Czech Republic has already claimed its first seven victims, and resulted in thousands of households being without electricity. Evacuations also occurred, including all inhabitants of Terezín, where the country’s nuclear power plant is located. The Vltava River flooded several areas of Prague, including the zoo, and affected local communications. Operation of the local water treatment plant had to be stopped, the Sme daily reported.

The biggest dams on the Vltava – Lipno, Orlík and Slapy which hold about 1.3 billion cubic metres of water – reached their maximum capacity on June 3, so water managers had to start diverting the water in order to regulate the level of the Berounka River, the Sme.sk website wrote.

The situation improved slightly on June 4, when the Vltava’s level in Prague began to flow at 3,200 cubic metres per second. Flooding moved to the northern part of the country, near the towns of Ústí nad Labem and Děčín, where several roads were closed and people were evacuated due to the rising level of the Labe River, Sme.sk reported.

Meteorologists warn of heavy rain in the Morava region, which might also result in increased water levels in the area.

Flooding has also hit Hungary, which had to stop all river transport. Hungarian Prime Minister Viktor Orbán has already declared a state of emergency, TASR wrote.

Meanwhile, the European Commission announced it will help those countries stricken by floods.

“We deeply regret the fact that several people have already died because of the floods in Austria, the Czech Republic and Germany,” said European Commissioner for Regional Policy Johannes Hahn, as quoted by TASR.

Money will be allocated from the European Union Solidarity Fund, which was established in 2002 after the last major flood struck Europe. Its aim is to help the member states recover from the catastrophe, thanks to money allocated for restoration and emergency operations, TASR wrote.