The challenges of communicating CSR

ONE DAY when Christopher Wren, architect of St Paul’s Cathedral in London, was on the cathedral’s construction site, he asked three workers who were cutting stone blocks what they were doing that day. The first one responded that he was cutting stone blocks to be precise and well-proportioned; the second one said that he was earning a living to support his wife and children; and the third one said that he was shaping blocks of stone to build the most magnificent building in the city to celebrate the glory of God. 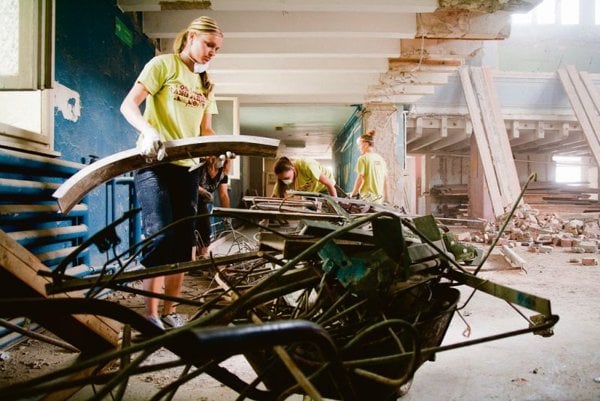 ONE DAY when Christopher Wren, architect of St Paul’s Cathedral in London, was on the cathedral’s construction site, he asked three workers who were cutting stone blocks what they were doing that day. The first one responded that he was cutting stone blocks to be precise and well-proportioned; the second one said that he was earning a living to support his wife and children; and the third one said that he was shaping blocks of stone to build the most magnificent building in the city to celebrate the glory of God.

Ed Gillespie, co-founder of Futerra Sustainability Communications, a communications consultancy firm specialising in sustainable development and corporate social responsibility, recalled this story, highlighting the importance of attitude, creative communication and the power of vision. He was one of the speakers on the panel Responsible Brands are More Successful!, with a focus on corporate social responsibility (CSR) communication at the Central and Eastern Europe CSR Summit, organised by the Pontis Foundation in Bratislava on May 30.

Experts in CSR believe that companies first have to behave responsibly and only then the question of communicating their CSR activities arrives.

“Communicating CSR is only a reflection of how a company is doing its business, what it does for its employees, the community, sustainability and protection of the environment,” Beata Hlavčáková, director of the Business Leaders Forum and programme director of the Pontis Foundation, told The Slovak Spectator.

Pavol Minár from the Istropolitana Ogilvy advertising agency agrees, highlighting that companies should achieve through their CSR activities that people and society really need and which are close to their core business, while warning of ‘over-communicating’ such activities.

Gillespie, along with Toby Webb, founder and editor-in-chief of the Ethical Corporation publication, showed during their presentations at the conference some examples of both good and bad approaches to CSR and advertising CSR activities, as well as its evolution over the last few years. Webb pointed out that brands really understand their power in the market place and some of them have adopted an increasingly sophisticated approach to communicating the role of businesses in society.

Data from the Eurobarometer survey from December 2012 show that Slovaks want to be informed about how companies conduct their business in Slovakia. Citing the survey, Hlavčáková pointed out at the conference that 72 percent of Slovakia’s population is interested in what companies are doing to behave responsibly, but only 36 percent of the population consider themselves to be informed.

“We see here much room for improvement,” Hlavčáková said.

With regards to how people learn about CSR activities, 52 percent of people find out through television, while 32 percent rely on printed media.

The next two categories are tied: 29 percent obtain information through a company’s employees, and the same proportion finds out through personal experience. Dissemination of CSR activities through social media reaches 13 percent. These last three categories have increased significantly compared with the previous survey two years ago. At that time, only 20 percent learned of these activities through employees in 2011, and 7 percent through personal experiences and social networks.

Hlavčáková pointed out that only 5 percent of the population uses CSR reports as a source of information about a company’s CSR activities, but that here it is also possible to see a positive development, as it was only 2 percent in 2011. More than one quarter of the population (26 percent) has no interest in this information. Two years ago it was 41 percent, which, according to Hlavčáková, shows that Slovakia’s population is gradually becoming more interested in CSR issues.
“The topic of CSR in Slovakia is still a new one; nevertheless, the public is getting a clearer picture [of it],” Hlavčáková told The Slovak Spectator. “In spite of efforts by companies to communicate their CSR activities to the public, we see weaker interest by the media in this theme. But the interest is growing each year and more media are speaking about CSR and do not perceive these activities by companies only as PR.”

According to Lucia Faltinová, executive director of the Slovak Donors’ Forum, most companies invest significant resources in communicating their CSR, however, the effect of the message remains limited.

“One of the reasons is that companies tend to single out CSR instead of placing it in the entire context of their existence, or story,” Faltinová told The Slovak Spectator. “There are, however, additional challenges that they have not yet managed to meet – their maturity and relations with the media.”

When commenting on mistakes companies make when publicising their CSR activities, Hlavčáková pointed out that many companies do not realise that CSR should be central to the way they do business.

“I think that many companies still take CSR as philanthropy, which they then communicate separately as something that they do in addition,” said Hlavčáková, adding that in Slovakia there are already companies that incorporate CSR into their business decisions and transparently communicate their activities not only to their customers but to employees as well, who in turn spread the information further.

Faltinová added that it is good that companies are aware of the need to communicate their CSR and are doing so.

“Their communication is well intentioned, though it tends to be over-professionalised: it lacks a natural tone, a natural line,” Faltinová told The Slovak Spectator. “They are trying too hard to be liked and sound appealing. The result is that the message turns out too stiff or cheesy.”

According to Faltinová, only time will tell whether and to what degree they are able to learn and become more natural with their communication.

“At the moment the communication style and behaviour is way too immature,” said Faltinová. “It is still in the early post-communist business-like stage. We haven’t yet reached the natural and often quirky communication of our Western counterparts that radiates the joy of doing things right.”

Minár of Istropolitana Ogilvy agrees that so far, informing about CSR activities comes off as too official and lacks a more playful and creative approach.

Hlavčáková also sees space for improvement in the business communication of companies themselves, in terms of its transparency and frankness, pointing out that when there is a discrepancy between how the company communicates in the media and how it behaves toward the client who complains about poor service or products, the trustworthiness of the company decreases. In this respect, she pointed out that an increasing number of people obtain information about CSR from their personal experiences.

According to Faltinová, the poor state of communication reflects a wider problem in Slovakia, which is an absence of quality communication skills among our population. An additional factor is that most media in Slovakia are confused about what they can and cannot mention in positive references to specific companies, as they are afraid of being seen as providing advertising. She also pointed to an all too frequent drive in the media to generate extra income from advertising and advertorials, even though the message can be delivered in other ways – like editorial work.