Energy as part of the country 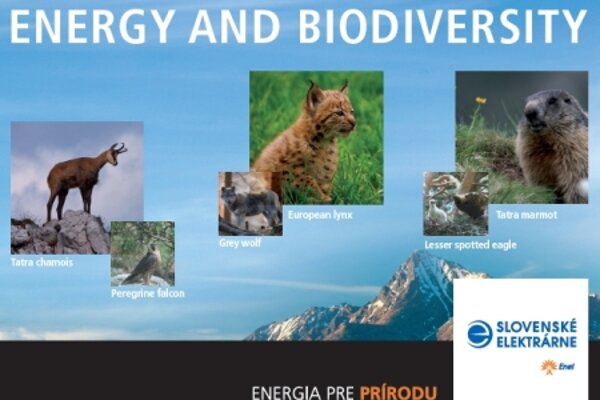 Sub: Saving the most precious animal species in the Slovak mountains

As a result of the project the chamois population has doubled within the area of the national park (738 km2). The Tatra marmot has been successfully re-introduced into its originally inhabited areas, where it had previously risked extinction. Efforts to monitor, save and support endangered species in our mountains have been extended to include the peregrine falcon, the golden eagle, the Eurasian lynx and the grey wolf.

In addition to protection and support of biodiversity, SE also endeavours to increase public awareness by installing educational panels in information centres in the valleys of the national park. SE employees regularly participate in volunteer programmes to clean and cultivate a natural environment for endangered animals.

In pursuit of innovation
SE also continues to intensify its usage of renewable sources of energy. Over the last two years SE has conducted energy studies in three mountain chalets: in Téryho Chata and Zbojnícka Chata it constructed photovoltaic power plants, and in Chata pri Zelenom plese it revitalised a small hydro power plant. As a result of the SE company’s assistance, the power at each chalet, which has almost tripled, is provided exclusively by renewable sources, thus producing clean energy, which represents an annual savings of approximately 9 tons of carbon dioxide emissions.

This green energy is a reflection of an environmental approach to the production mix, which is also reflected in ecological improvement through a project to co-incinerate wood chips in the Vojany thermoelectric plant.

Thanks to completion of the second stage of biomass, co-combustion and re-start of the reconstructed Unit 5, SE, a subsidiary of the Enel Group, has significantly increased the share of biomass used for power generation at the Vojany thermal power plant by bringing volumes at Unit 5 to 20%.

The power plant will reduce its CO2 emissions by 107,569 tons per year, while tripling its annual production of clean energy. Furthermore, it also represents a new development opportunity for regional suppliers and biomass producers.

SE began preparing biomass co-combustion in Vojany in 2007. After successful trial runs, the commercial co-combustion of 4% of biomass at Unit 6 was launched in July 2009. The share of biomass combusted in this Unit has gradually increased to 5% of fuel, equal to the consumption of 80 tons of biomass per day. At the end of 2012 the second stage of the project was concluded and Unit 5 re-started, reaching a 20% share from combusted biomass, i.e. 400 tons of biomass daily.

The Company has been considering as its next possible milestone, a potential gradual increase in the share of biomass co-combustion at Vojany’s Unit 6 to as much as 20% of the total amount of fuel consumed.

SE invested €1.9 million in the construction of new technological equipment for biomass combustion in the Vojany power plant. The highly efficient co-combustion of wood chips at the power plant contributes to the quicker and more economical fulfilment of environmental targets. With the aim at constantly improving its efficiency, Vojany TPP contributes to further strengthen SE’s clean generation fleet with 89% of its energy produced being CO2-free.

Since SE prefers to utilise domestic biomass sources, the project represents an opportunity of development for the Vojany region. The power plant consumes between 400 and 480 tons of biomass everyday, which is supplied by 8 suppliers, six of which are local, while a smaller portion of biomass is imported from Hungary and Ukraine.

The higher volume of biomass combusted at the Vojany power plant also provides the opportunity to increase the amount of fast-growing woody plants in the eastern region of Slovakia. Regional producers may grow approximately 150,000 tons of wood chips in a three-year cycle, utilising the two or three thousand hectares of soil available in the 50 km Vojany area.

Thanks to such projects, Slovakia is gradually coming close to 4-percent use of biomass, which is the average in European Union member states. Along with photo-voltaic energy at Vojany, the second photo-voltaic power plant in the SE portfolio, located in western Slovakia near the Mochovce nuclear power plant, offers an overwhelming view too. Its capacity is also 1MW and it is meant primarily for use by power plants.

The most crucial thing for the future of the Slovak energy sector is the completion of the third and fourth blocks at Mochovce. This largest private investment project in Slovakia, amounting to about €3.8 billion, will secure Slovakia’s energy self-sufficiency and renew the country’s electricity export potential.

Through the payment of wages and guaranteed stable employment, the economic activity in the region is growing. Completion of Mochovce has demonstrably become an impulse for the construction of new houses, flats, restaurants, shops and services.

Mayors from the villages around the plant confirm that the power plant is the main driver of economic development in the region. "The Project of the Mochovce Nuclear Power Plant is not only a financial benefit for the region but also creates thousands of direct and indirect job opportunities," reads the declaration of the Regional Association of Municipalities at Mochovce (which was established in 1992 and currently associates 93 municipalities within the 20-km perimeter of the nuclear power plant). According to the chairman of the Nitra self-governing region, Milan Belica: "Mochovce is the largest and most stable employer. Even though completion of units 3 and 4 is delayed, I believe it will be completed after all, because new jobs will be created," Belica said.

Equally important is Mochovce’s contribution to Slovakia’s clean energy mix. With the new units the share of carbon-free electricity will grow to over ninety percent of our overall generation mix.

Safety is a top priority for the energy sector and even more so for the operators of nuclear facilities. This was also confirmed by the results of stress tests, which showed that SE power plants meet, and in many aspects even exceed, international safety standards.