AT THE beginning of June the south-west of Slovakia had to face its biggest flood risk since 2002. In Bratislava the Danube River, which runs through the city centre, rose to a record height of 1,030 centimetres, while in other places in Trnava and Nitra Regions it hovered between 800 and 1,000 centimetres. 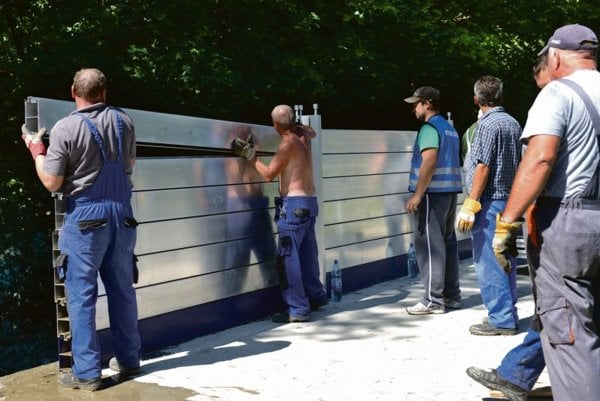 AT THE beginning of June the south-west of Slovakia had to face its biggest flood risk since 2002. In Bratislava the Danube River, which runs through the city centre, rose to a record height of 1,030 centimetres, while in other places in Trnava and Nitra Regions it hovered between 800 and 1,000 centimetres.

Unlike Germany or the Czech Republic, which were also hit by surging rivers, the floods in Slovakia claimed no victims. Nevertheless, the river flooded several areas in the capital, as well as spots in the south of the country. Though in other parts of Slovakia along the Danube the water level was not as high as in Bratislava, the army and fire brigade monitored the situation closely, and some places had problems with rising ground-water levels. About 400 volunteers offered assistance in Komárno by filling sandbags, 10,000 of which were used to strengthen the dam between the town and the nearby village of Kameničná. Problems also occurred elsewhere on the Váh River between Kolárovo and Komárno, in Nitra Region.

The situation has now stabilised, with representatives of Bratislava and other towns along the Danube agreeing to end the state of emergency that was announced as the highest water approached. However, as The Slovak Spectator went to print the Slovak Hydrometeorological Institute (SHMÚ) was still maintaining one first-degree warning and one second-degree warning on some sections of the Danube in Nitra Region, according to the institute’s website.

People and municipalities are now starting to file their first insurance claims. However, the authorities say that the damage in the capital will not be as great as it was 11 years ago, partly due to a new flood-prevention system, including modular flood barricades, which was implemented between 2005 and 2010 at a cost of nearly €33 million.

“What was done in 2006-2010, when these flood barriers were constructed, emerged as something to save billions,” Prime Minister Robert Fico said, as reported by the TASR newswire.

This year’s high water might result in several changes to Slovakia’s flood protection plans. Interior Minister Robert Kaliňák has already said that the government could change the rules concerning the appropriate time for calling rescuers when it becomes known that a certain area will be hit by a natural catastrophe.

According to Defence Minister Martin Glváč, this year the government started imposing some anti-flood measures before a critical situation was formally announced. As an example, he mentioned prevention for third-degree floods that began before the official warning was even given, the SITA newswire reported.

Kaliňák also stressed the success of mobile barriers, compared to the damage caused along the Danube in Germany, Austria and even Hungary. He said during the political talk show O 5 Minút 12 broadcast by Slovak Television (STV) that it would be good to introduce the system in other places around Slovakia which suffer from flooding, such as along the Rivers Váh, Hron, Poprad, Hornád and Ondava. The country should be prepared both for floods caused by persistent rainfall and flash floods caused by storms, Kaliňák said.

This year’s floods are a big lesson for the country, which should now use as much money as it can from European Union structural funds to invest in construction of flood barriers where necessary, Fico said, as reported by TASR.

Environment Minister Peter Žiga said during the political talk show Sobotné Dialógy broadcast by Slovak Radio (SRo) on June 8 that Slovakia spends only a small amount of money on water management, though preventive measures are typically about three to four times cheaper than remediation and rescue work. He also admitted that water managers are underfinanced and lack about €450 million, but added he believes that flood prevention measures would now become a financial priority for the state.

“It is society’s wish to redistribute financial resources, either from structural funds or to allocate them from the state budget,” Žiga said, adding that he hopes the ministry will now be more successful in discussions with the Finance Ministry over its budget for 2014.

The ministry has identified 559 problematic areas in Slovakia for which it would like to ask for about €400 million to be allocated from the EU budget for 2014-20, Žiga added. These spots, together with information about the number of endangered people or industrial and agricultural sites, should also be part of a flood map requested by the EU, the Sme daily wrote.

The water level on all sections of the Danube is now gradually decreasing. The authorities in Bratislava have already lifted the official state of emergency. The Petržalka city borough has started to deal with the results of the flooding, and has removed flood barricades in several places, as has the Old Town city borough. The situation in Devín is also better, and the authorities have opened the road to the city, though some restrictions still remain, SITA wrote on June 11.

The roads which had to be closed because of the floods were open too. However, there is uncertainty about the date on which river transport, which was halted on June 3, will be able to resume. Jana Vadkertyová, a spokesperson for Slovakia’s State Navigation Administration (ŠPS), told SITA on June 10 that river transport was not likely to be restored in the near future.

Along with the clean-up work which followed the flood, people in affected areas must now face another threat: a possible explosion in mosquito numbers. Their prevalence will depend on the temperature, Nasir A. Jalili, an expert on tropic parasitology from the Microbiological Institute at Comenius University in Bratislava, told SITA. He added that problems might occur along the whole length of the Danube in Slovakia, as well as from Kolárovo to Komárno, along the Váh River.

The issue has already been discussed by the government and, according to Health Minister Zuzana Zvolenská, the state is prepared. All responsible institutions have agreed on the steps they will take, and informed municipalities about these. Moreover, the Public Health Authority (ÚVZ) is trying to locate mosquito hatcheries, she said, as reported by SITA.

The government has allocated about €11 million to address the problem, said Finance Minister Peter Kažimír, adding that the central government would repay expenditure by municipalities incurred exterminating mosquitoes, SITA wrote.

According former environment minister József Nagy, who is now an MP for the opposition party Most-Híd, allocation of money for extermination of mosquitoes should be part of rescue works spending, as it was before 2010, when the government passed an amendment to the law on protection from floods, SRo reported.