EVEN THOUGH Australia and Slovakia are separated by tens of thousands of kilometres and differ considerably in terms of size, population and economic strength, Australia’s interest in intensifying economic relations with Europe and its mutually shared values with the continent, make Slovakia, with its key location in the middle of Europe and its membership in the European Union, a place of interest for Australia. This was underscored by the mission of the European Australian Business Council (EABC), which stopped in Bratislava on its annual European tour in early June. 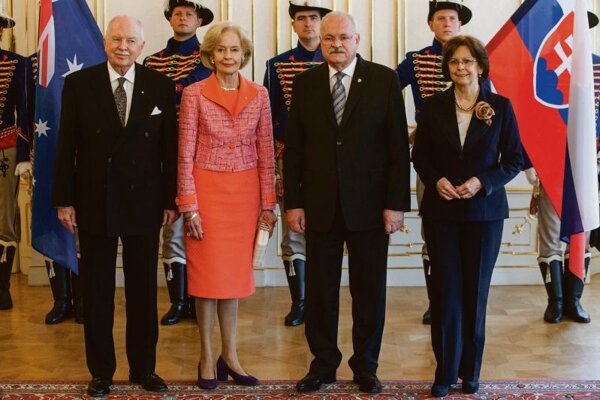 EVEN THOUGH Australia and Slovakia are separated by tens of thousands of kilometres and differ considerably in terms of size, population and economic strength, Australia’s interest in intensifying economic relations with Europe and its mutually shared values with the continent, make Slovakia, with its key location in the middle of Europe and its membership in the European Union, a place of interest for Australia. This was underscored by the mission of the European Australian Business Council (EABC), which stopped in Bratislava on its annual European tour in early June.

The EABC travels each year to Europe to promote trade and investment between Australia and Europe, and to connect businesses and policy-makers via issues affecting Australia’s largest economic relationship. This year the mission was, for the first time in its history, led by Governor-General Quentin Bryce. The almost 30-member delegation visited Paris, Brussels, Bratislava and Vienna between June 2 and June 7.

“[The visit in] Bratislava offers a big window for us to assess the European trade and investment outlook,” Governor-General Bryce said in her speech opening a panel discussion in Bratislava on June 7, adding that it also provided an opportunity to understand factors that have contributed to Slovakia’s successful transition to an open and export-oriented economy.

Foreign Minister Miroslav Lajčák responded that Slovakia sees the high-profile delegation’s visit to Slovakia as an acknowledgement of Slovakia’s achievements.

“We see it also as an expression of Australian interest in the region of central Europe, which we also very much welcome,” said Lajčák, adding that the distance between the two countries is only geographical, and that they are quite close in terms of shared values. “Australia and the EU share the same values, which create natural conditions for developing close cooperation. We see the mission of the EABC as an important stimulus in our joint effort.”

Lajčák believes that the first inaugural dialogue among Australian and European leaders, which took place in Brussels on June 6, provides a new dimension for mutually profitable dialogue.

“We see the strengthening of the dialogue between the EU and Australia as a precondition for development of bilateral relations between Australia and the EU’s individual member states,” said Lajčák. “Slovakia belongs to the very core of the current EU and is a member state with constant economic growth. With its central location in central Europe, Slovakia provides excellent access to the entire European market.”

While during its previous missions to Europe the EABC visited other central European countries, for example Poland, this was its first visit to Slovakia.

“The goal of our mission is to uncover the European agenda,” Jason Collins, CEO of the EABC, explained to The Slovak Spectator, adding that they wanted to learn how the integration of the EU market is affecting business. “We always try to uncover unfamiliar territories and there are many countries in Europe where Australia has very mature and very extensive business relations and others which we do not. To do this is part of a process of familiarisation for Australian business leaders.”

He added that people in Australia have observed Slovakia’s rapid economic development – noting that, in spite of the crisis, Slovakia and Poland have performed very strongly – as well as the extraordinary levels of investment into the country’s manufacturing sector and its strong export performance.

“Our job is to analyse more of the conditions that have created this success: is it the government policy, is it infrastructure, is it tax arrangement; to really understand what are the settings in the policy that have since enabled this economic activity to flourish,” said Collins.

Before the panel discussion the Australian delegation attended a discussion on the topic of the position and economic policies of Slovakia and central European countries towards the euro crisis. One of the speakers was Vladimír Vaňo, chief analyst of Sberbank Slovensko, who gave the delegation a brief overview of the Slovak banking sector, its role in the recovery of growth during 2010-2012 and a short explanation of the resilience of Slovak economic growth after the 2009 recession, along with an illustration of the proven benefits of Slovakia’s adoption of the euro.

Michael Happell, chairman of PricewaterhouseCoopers in Australia, said to The Slovak Spectator that it was interesting to hear the positive sentiment towards joining the EU and adopting the euro as the currency, adding that the timing of the latter was probably very helpful.

Collins added that these issues are not well understood in Australia.

“Conventional wisdom would be that this must be a real problem for the economy,” Collins said with regards to Slovakia’s adoption of the euro prior to the crisis. He added that while there is one European Union, there are very different dynamics at the member-state level in the economies, and that it is necessary to examine both areas to truly understand the situation.

According to Happell, it is very difficult for Australian companies to differentiate between Slovakia and Hungary, for example, and that it was very helpful to get a current up-to-date detailed account of Slovakia.

Collins added that another common perception is that being in the eurozone automatically means having a much higher cost economy.

“This is another real reason why we have been very interested to come here to Slovakia to better understand these issues,” said Collins.

“Slovakia can serve as the ideal springboard for Australian corporations considering entry into the half a billion EU market,” Vaňo told The Slovak Spectator. “Given its geographic location,
membership in the eurozone and very good qualification of labour, Slovakia is also well suited as a destination for the shared-service centres of large Australian multinational corporations operating globally.”

The success and expansion of the shared-service centres of global multinational corporations in Slovakia was one of the topics discussed by Australian business leaders at a discussion prior to the panel discussion, according to Vaňo.

Happell views as fascinating the story of Slovakia’s penetration of the automotive industry and its growth in difficult economic times, when automobile production is declining almost everywhere else in the world.

“We all know that you have a motor-vehicle industry,” said Happell, adding that there are lots of industries which spin off of that.

Apart from the automotive industry and shared service centres, he identified transport and logistics as sectors with promising prospects for development, investment and cooperation.

“I think Slovakia would be definitively of interest for companies that have existing European operations, as they look to grow them and place more things here,” said Happel, adding that Slovakia could also be interesting for Australian companies with plans to expand into Europe.

Asia is a strong Australian partner, but Governor-General Bryce said in Brussels that “Asia’s rise increases the importance of Australia’s ties with Europe”.

In response to this, Collins explained that the interesting thing about the Australian economy and its position in the world is that Australia has a very strong economic and security-based relationship with the US. It has also seen over the last 50 years, and in the last 15-20 years in particular, a boom in its trade relations with Asia. But the vast bulk of investment in Australia has come from the EU. He added that the fundamentals, for example, the way in which the Australian legal system operates, are rooted in European tradition.

Happell added: “Europe is the biggest foreign investor into Australia and still the second biggest trading partner, so it’s important even now, when there is a lot of growth in Asia, to keep contact with the more traditional market, in particular, given the historical connections between Australia and Europe.”