Learning Italian for the heart and the mind

ROBERTO Martini has a message for young Slovaks: they should study Italian for “both the mind and the heart”. Italy’s ambassador to Slovakia explains that the heart stands for Italian culture, noting that Italy has the most UNESCO World Cultural Heritage sites of any country. When it comes to more hard-headed reasons to study Italian, Martini hints at the number of Italian companies operating here in Slovakia, and their role as potential future employers for the young. Italian is actually the third most-taught foreign language in Slovakia, after English and German, according to the Italian Embassy. 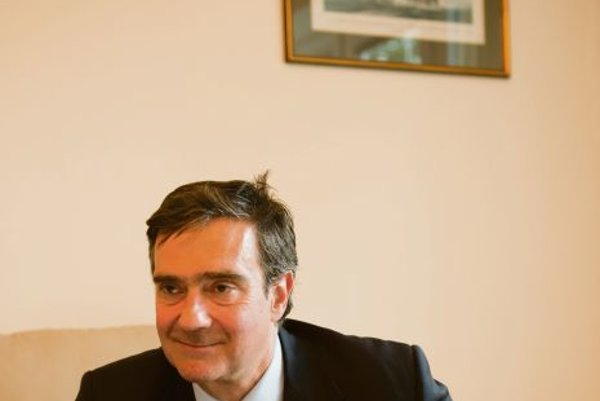 ROBERTO Martini has a message for young Slovaks: they should study Italian for “both the mind and the heart”. Italy’s ambassador to Slovakia explains that the heart stands for Italian culture, noting that Italy has the most UNESCO World Cultural Heritage sites of any country. When it comes to more hard-headed reasons to study Italian, Martini hints at the number of Italian companies operating here in Slovakia, and their role as potential future employers for the young. Italian is actually the third most-taught foreign language in Slovakia, after English and German, according to the Italian Embassy.

When asked about aspects of life in Slovakia which he did not expect to encounter before coming here a year ago, Martini mentioned Slovaks’ passion for outdoor activities and people’s relationship with nature, which he said “is somehow lost in many other countries”.

The Slovak Spectator spoke to Martini about the economic challenges his country faces, economic ties between Italy and Slovakia, as well as the potential for tourism.

The Slovak Spectator (TSS): One of your predecessors said he felt in Slovakia a kind of “southern feeling” that puts the Slovak and Italian nations on the same wavelength and makes their interactions smooth and contacts close. You started your mission here in Slovakia one year ago. What, in your opinion, do Italians and Slovaks have in common?
Roberto Martini (RM): I fully agree with my predecessors. I can also feel a sort of Mediterranean touch here in Slovakia. Our nations share many cultural and social traditions. We both attach great importance to family and the institution of family is something that permeates our social structures. Family is our roots – and the roots of our societies; we rely on family when we are in trouble. I feel that people here are similar to Italians in their way of enjoying free time, but at the same time, they are ready to roll up their sleeves when they have to work. This is especially true of periods of crisis, like the one we are all facing in the European Union.

TSS: What are the issues that you plan to focus on during your diplomatic mission and what are the challenges that Italy and Slovakia currently have in common?
RM: We attribute great importance to bilateral contacts between senior government officials but also economic and cultural ties. Italy and Slovakia have an important turnover in trade of around €4.5 billion and you might be delighted to hear that it is in favour of Slovakia, which sells more than Italy. This means that our economies are strongly interconnected, while our contacts are crucial in a number of sectors, for example energy, the banking sector, machinery and textile production. Yet we attribute great importance to cultural ties as well; we have a very active Italian Cultural Institute in Bratislava whose roots reach back to the 1920s; back then it was called the Circo Italiano or Italian Circle. It is a home for important events including the currently running Dolce Vitaj, a festival of Italian culture whose name is a combination of the Italian ‘dolce vita’ meaning sweet life, and the Slovak ‘vitaj’ meaning welcome. Concerts, fashion exhibitions and, for example, a market of Italian products are all on offer. Recently we had a concert dedicated to both the 200th anniversary of the birth of Verdi as well as the 20th anniversary of the establishment of diplomatic relations between Italy and Slovakia.

TSS: Italy’s economy is estimated to contract by 1.4 percent this year, while your country is experiencing its longest economic decline of the past 40 years. Italy is also struggling with a high rate of youth unemployment, currently reaching 40 percent. Recently, Italian Prime Minister Enrico Letta announced that his government plans to push this rate under 30 percent. How does the Italian government plan to achieve this, and at the same time provide a boost to the Italian economy?
RM: Since I am optimistic in life, I prefer to look at a glass of water half full rather than half empty. Italy still ranks eighth in the world classification in terms of GDP [as ranked by the United Nation] and fourth when ranked by its GDP among European countries [as listed by the International Monetary Fund as of April 2012], while also being the second most industrialised country in Europe. It means that my homeland has a large industrial economy made up mostly of small and medium-sized enterprises, which are really the backbone of our economy. Yet it is also true that we are facing negative growth rates and high unemployment rates, especially among the younger generation.

The Italian government, appointed in February and led by Mr Letta, is putting together measures in order to address the high unemployment rates. What we want to do is to reduce the gap between the wages which are effectively paid to workers and the total costs of the employee for the employer. This gap has to be reduced through strengthening apprenticeships, particularly improving training, while cutting labour costs and labour taxation. More flexible working contracts are also being discussed, along with benefits for companies which hire younger employees. These measures will be discussed in the coming days with other European countries such as France and Germany and Spain, and will then be submitted to the next Council of Europe on June 27. Then we will have a clearer sketch of the different measures taken by the government.

TSS: You mention the state’s focus on strengthening apprenticeships. What is the situation of vocational education in your homeland?
RM: Italy was pretty famous for having good craftsmanship and there are regions and areas where there are very proud groups of manufacturers of furniture or goldsmiths or wine producers. Perhaps it is again time to get back to some of these professions, though in many countries the young generation might not be interested in studying these crafts. But we definitely need to train more skilled labour.

TSS: Italy is the fourth biggest investor in Slovakia. Do Slovakia and its business environment remain interesting to Italian investors?
RM: Our businesspeople are still attracted to the Slovak market; we have a survey by the Italian-Slovak Chamber of Commerce from last November which suggests that Italian companies continue to be very interested in the Slovak market.

I regularly meet businessmen and businesswomen from Italy who are interested in the country. The Association of Italian Women Entrepreneurs AIDA organised a mission recently to come to Bratislava to participate in a business forum that was held here.

The ladies are very interested in new forms of investment in Slovakia. We spoke, for example, about trade in fashion.

TSS: What are the areas where you see the biggest potential?
RM: Of course, there is the automotive sector, which is still very important in Slovakia and has a network of suppliers including Italian companies which produce in Slovakia engine parts, among other things. But food products, design, fashion and furniture are all on our list of areas with potential.

TSS: Italy is a popular holiday destination for Slovaks. Is this also true the other way around? Have Italian tourists discovered Slovakia as a holiday destination? How, in your opinion, could Slovakia attract more Italian tourists?
RM: Italians have discovered Slovakia and you will see many Italian tourists hanging around in Bratislava who are mainly attracted by history and culture. Italian tourists who come to Slovakia also might visit Vienna and Budapest during the same trip. Italians, just like Slovaks, prefer cultural tourism, which means they love to visit museums and theatres, and listen to beautiful music. Perhaps more Italians should discover Slovakia’s mountains, the Tatras. For example Mr Zanolla, an Italian mountain climber, came to Slovakia to attend the Mountains and City Festival [the 14th year of this international festival of mountain and adventure films]. Then of course, you have the spas.

TSS: What is the spa culture in your country?
RM: It is very similar to what you have here. We used to have important spas, ‘thermae’, during the 1950s and 1960s, and people visited them more for therapeutic purposes. Recently there has been a shift from therapy to relaxation, leisure and wellness. I guess this is a common trend in many countries.

TSS: How do you assess the interest of Slovaks in Italian culture and language? Where do you see the strongest connections?
RM: Slovaks love music in all its aspects: from classical music to contemporary performers. It is wonderful for us Italians when you walk the streets of Bratislava and hear piano music coming from the windows of some buildings. Music halls are full of people all the time, while you have very high-quality concerts and orchestras. Music is one point of common interest. I recently went to the concert of Eros Ramazotti here and I know another Italian performer, Zucchero, will have a concert here too.

Painting is important too and soon we will have the opening of Talianska maľba at the Slovak National Gallery, which will be a wonderful exhibition devoted to Italian paintings between the 16th and 17th century. We have some paintings coming from Italy, including a Tiepolo, lent by important museums.

Then, since your readers are students, tell them that they should study Italian; for the heart and for the mind. The heart stands for Italian culture: we have the greatest number of UNESCO sites – 47 – among all the countries of the world; we have academies, churches, art galleries, museums, literature and theatre, as well as places to visit. The mind should choose Italian because of the work opportunities: we have more than 200 companies who are members of the Italian-Slovak Chamber of Commerce. Italian can be very useful for anyone with aspirations to work for these companies or even to establish contact with them.

TSS: What interest is there among Slovaks in learning Italian?
RM: It’s really pretty good, and increasing. We have around 700 students in the Italian Cultural Institute in Bratislava and we have the lyceum of L. Sáru, which has a bilingual section which works very well. A few days ago, I signed their diplomas for the maturita [final school leaving] exams. At the university level, there is a department of Italian studies at Comenius University, and also in Banská Bystrica and Ružomberok, while we also have the Dante Alighieri Association in Slovakia.