Dolce Vitaj, plus other Italian delicacies

ITALY and Slovakia can be connected through their histories and cultures: from ancient times, when the territory of the latter marked the borders of the former, through the exchange of artists, artworks, as well as traded commodities, through times when parts of both fell within a single empire, the Austro-Hungarian, to modern influences reflected in music, films, decorative arts, theatre, design and – last but not least – fashion and gastronomy. 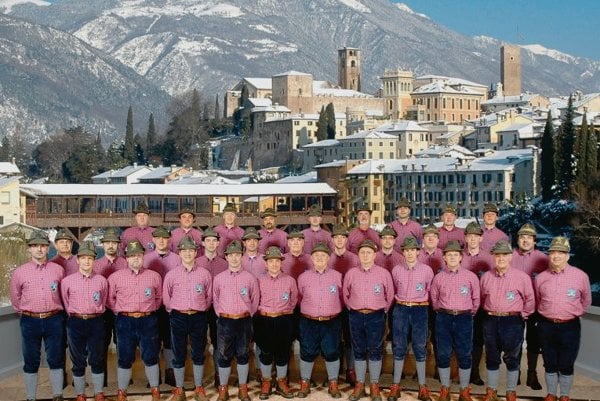 ITALY and Slovakia can be connected through their histories and cultures: from ancient times, when the territory of the latter marked the borders of the former, through the exchange of artists, artworks, as well as traded commodities, through times when parts of both fell within a single empire, the Austro-Hungarian, to modern influences reflected in music, films, decorative arts, theatre, design and – last but not least – fashion and gastronomy.

All the phenomena rooted historically in the national cultures, as well as the modern ones, have a strong promoter in the Italian Cultural Institute (IIC).

“In recent years, our goal is to present and re-present an Italy which defies stereotypes,” Michal Denci of the institute told The Slovak Spectator. “So it’s not just 'pizza, pasta and songs of Naples', but also contemporary artists, the cultural avant-garde and modern trends. Moreover, many of the contemporary artists experiment with means of expression, and find various ways of communicating with audiences other than verbally. Thus, their works, performances and events thus have also become available to audiences who have not mastered the Italian language perfectly. We try to offer to Slovak audiences especially works which they can fully enjoy, understand – and thus appreciate – while, of course, taking into account the quality and prestige of the artists,” he concluded.

Although Italian culture is organised year-round, the month of June has become the most concentrated time for its projects and events. The 6th year of the Dolce Vitaj festival of Italian culture started on June 8 and will continue until the end of – and in one case even after – the month. This year, it has expanded beyond the Slovak capital, visiting the cities of Zvolen, Košice and Poprad, while also sending a representative to the International Film Festival in Trenčianske Teplice in the form of film director Yuri Ancanari.

“The Dolce Vitaj festival is oriented towards creativity,” Italian Ambassador to Slovakia Roberto Martini said at a press conference. “Italian creativity is reflected in various spheres and connects in a friendly sense Slovakia and Italy in different artistic fields.”

Martini continued that this year’s festival will focus on all cultural areas, from Italian fashion through national cinematography and classical music (commemorating the 200th anniversary of the birth of Verdi) to – of course – gastronomy and street theatre, and to the visual arts of the 16th to 18th century.

Marco Gerbi of the Italian Cultural Institute noted at the press conference that the June festival is the result of year-round activity and that immediately after one festival ends, preparation begins for the next.

“As for crucial areas presented at this festival, we focused on fashion and design,” Gerbi said, “two very interesting and attractive spheres, but very demanding in terms of logistics and high costs.” Saying this, he thanked all the institutions, sponsors and individuals who helped to bring the events to Slovakia. He named other festival events too, stressing specifically their presence outside Bratislava, reaching several provincial venues for the first time.

One of the opening events of the festival was the launch of an exhibition combining clothes and photo panels showing celebrities wearing the designs of famous Italian fashion designers, from Giorgio Armani and Gianfranco Ferré, through Gianni Versace, Fendi and Valentino, to André Laug, Delfrance Ribeiro and Brioni. Traditional schools and studios representing quality and trend-setting can also be seen there, like the Accademia di Costume e di Moda, Accademia Koefia, Scuola di Moda Ida Ferri, or Accademia Nazionale dei Sartori. An exhibition called Dreams and Passions of Italian Fashion – Creativity, Style and Sophistication, which will warm the hearts of – especially, but not exclusively – women, can be seen in the Dvorana (Courtyard) of the Culture Ministry in SNP Square 33 until June 27; admission is free.

The beginning of the festival was marked by two concerts, the first offering minimalistic and post-minimalistic compositions by 20th century authors like Francesco di Fiore, Pavel Karmanov, Wim Mertens, Douwe Eisenga, Philip Glass, Giovanni Sollima, Giacomo Cuticchio, Paolo Carlomé, Michael Nyman and Matteo Sommacal, the last of whom attended the event in person. As the ensemble which performed the works is called Piccola Accademia Degli Specchi, meaning Little Academy of Mirrors, the concert could not have taken place anywhere but the Hall of Mirrors in the Primatial Palace in Bratislava, as Ambassador Martini noted on the evening. The concert, named after a composition by Cuticchio entitled Vision and Ecstasy, took place on June 4 before a full auditorium.

On June 8, the concert hailing the anniversary of the world-famous Italian composer Giuseppe Verdi – as well as 20 years of Italian-Slovak diplomatic ties – was organised, in which soloists Minerva Moliner Ferrer, Francesco Grollo, the Lúčnica choir and the Symphony Orchestra of Slovak Radio performed arias from his operas.

Other performances and projects include traditional folk music, a traditional Italian market, films, modern pop music, drama, a puppet show and an exhibition dedicated to Vespa, the popular Italian scooter brand. An exhibition that will last until November is slated to open on June 26 in the Slovak National Gallery in Bratislava, presenting important artworks by 16th-to-18th century masters like Tiepolo, Tintoretto, Magnasco, Francesco Morandini, Annibale Caracci, Caravaggio and Piazzetta, among others.

In Košice, a wine festival was held on June 14, and Zvolen Castle will host several Verdi operas within the Zvolen Castle Plays up to the end of June. The city of Poprad will host four days of events called Viva Italia – from a business conference, through a wine and food market, concerts by the Ruggero Robin Jazz Trio and the Babjak Brothers, a commemorative ceremony for the Slovak soldiers who fought during World War I in the Italian front near the Piave River, the opening of an exhibition, Dolomity & Unesco, in the local Tatra Gallery, a performance by the Alpini Arti per Via grouping, and a concert by the Edelweiss A.N.A. Monte Grappa choir. The Poprad festival was prepared in collaboration with the partner town of Bassano del Grappa.

“As well as Dolce Vitaj, the Italian Cultural Institute organises other events throughout the year,” Denci told The Slovak Spectator. “In October there is always a week of Italian language which includes several events; it usually focuses on one theme around which the events – films, lectures, concert – then evolve. The institute also organises the Mittelcinemafest movie festival, and also takes part in the European Day of Languages on September 26, as well as organising language courses, a library and a film library. There are also individual performances and events, like the blues concert by Robert Ciotti, or organ concerts planned for July and September.”

The festival events – some of which are outdoors and for which admission is free – can be found at www.dolcevitaj.eu, and the year-round programme of the institute at www.iicbratislava.esteri.it. As for the selection of Italian events to be presented in Slovakia, Denci explained that this is the result of long-term planning, and is mainly the responsibility of the head of the cultural institute.