THE HISTORY of both the Hungarian Empire and the Turiec municipality of Necpaly have been revived in an exhibition in the village called Notary, which opened in 2009 thanks to the initiative of Vladimír and Alžbeta Hanzlíks. 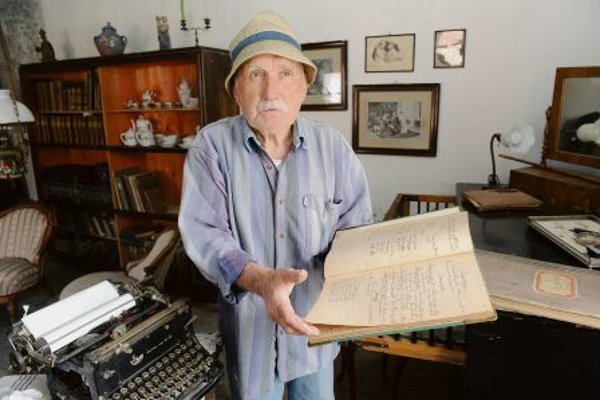 THE HISTORY of both the Hungarian Empire and the Turiec municipality of Necpaly have been revived in an exhibition in the village called Notary, which opened in 2009 thanks to the initiative of Vladimír and Alžbeta Hanzlíks.

For 50 years, Hanzlík worked as a local veterinarian in Necpaly and its vicinity, while living mostly in the nearby city of Martin. Later, he and his wife bought an old house in the municipality from a man who ran a pub and a shop in the village. After renovating the dilapidated house, they came up with the idea of founding a museum that revives the local history and the old notary.

“We were very happy, and we felt [as if we were] re-gaining the family property,” Hanzlík said, as quoted by the TASR newswire. “Between 1901 and 1908, the grandfather of my wife, Štefan Reindl, was a notary here. He was a very wise and pleasant man, famous also as the author of the first songbook of Christmas songs published in book form.”

The founder of the museum received some of the exhibition’s items from people after it opened, but most of the collection was obtained from touring local villages as a veterinarian.

“I brought home things that people would throw away, or didn’t want to have at home,” Hanzlík said. “And sometimes it was a problem - where to put it - as we lived in a pre-fab house in a city. But suddenly, here it was as if God showed me how to use it all: beautiful old lamps and furniture, but also many books, mostly in Hungarian, German and Latin.”

The oldest item is a book about managing religious property, written in Latin, which dates back to the 18th century. Hanzlík stressed that when working in a museum, one cannot strive just for profit or fame.

“I enjoy it a lot and I am very happy to do this job,” he said. “I feel glad in my soul with every small thing I bring here, repair and put on display. And when someone praises my work, it makes me happy, no doubt,” he added.

But he pointed to the low level of education and general knowledge of many visitors about Slovakia and its history - they often do not know that Slovakia was part of the Hungarian Empire.