AFRA, an undernourished Belgian Shepherd dog whose condition dismayed viewers of the TV reality show Mum, Get Me a Bride (Mama ožeň ma), has been taken into care by animal welfare workers. 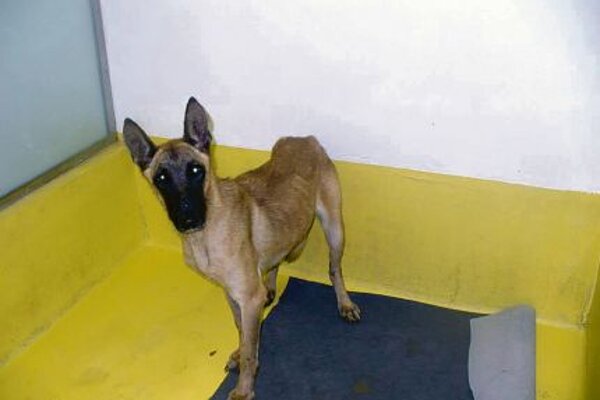 Afra, soon after she was taken into care. (Source: Sloboda Zvierat)
Font size:A-|A+0

AFRA, an undernourished Belgian Shepherd dog whose condition dismayed viewers of the TV reality show Mum, Get Me a Bride (Mama ožeň ma), has been taken into care by animal welfare workers.

After the dog appeared on the show, inspectors from the Sloboda Zvierat / Animal Freedom civic association and the State Veterinary Administration visited her and found that she was suffering from malnutrition. The owner told them that Afra had a chronic illness which affected her food intake. However, Siliva Čaňová from Sloboda Zvierat informed the SITA newswire that the dog was taken over on May 31 by people from the association and brought to its Bratislava rescue shelter for a more precise diagnosis. Veterinarian Martina Mužiková found that none of the medical tests revealed any health issues that could cause malnutrition.

“However, the dog is very shy – even nervous – and poorly socialised,” Mužiková said. “She reacts strongly to being touched by hand – she sags and shows signs of aggressiveness. I suspect [she is a victim of] maltreatment and neglect [and] insufficient feeding. Her extreme timidity could indicate physical abuse,” the vet added.

Afra appeared in a May edition of the reality show, which attempts to match women with bachelors whose mothers try to find them a suitable bride. After seeing Afra on TV, viewers reacted strongly to the dog’s poor condition. She has now gained some weight, but her mental condition is improving only gradually. She was moved from quarantine to the shelter section of the complex and given a microchip. Once she recovers from her apparent trauma, she will be offered for adoption.

Her case is just one of many, Čaňová said. Sloboda Zvierat addresses numerous cases on a daily basis through a nationwide network of private inspectors. They mostly follow up on tip-offs submitted by the public pointing to cases of abuse or neglectful care of pets, livestock and wild animals. Cooperating with state bodies, Sloboda zvierat tries to remedy these cases.

Inspector Mária Sliacka – who was also in charge of this case – said that most people send tip-offs about malnutrition, lack of free movement (animals kept on a short chain), lack of water or shelter. They also receive a lot of reports of lack of medical attention during illnesses or after an injury. Sliacka said that in 2012, Sloboda zvierat’s inspectors dealt with 485 tip-offs, of which 330 were well-founded. They conducted 251 interviews with animal owners and took 159 animals away. They filed three criminal complaints for animal cruelty, which is banned in Slovakia and classified as a crime.