THE JOINT exhibition of Moussa Kone and Svätopluk Mikyta called Follow the Line presents a less common approach to visual art: diaries done in the form of drawings. 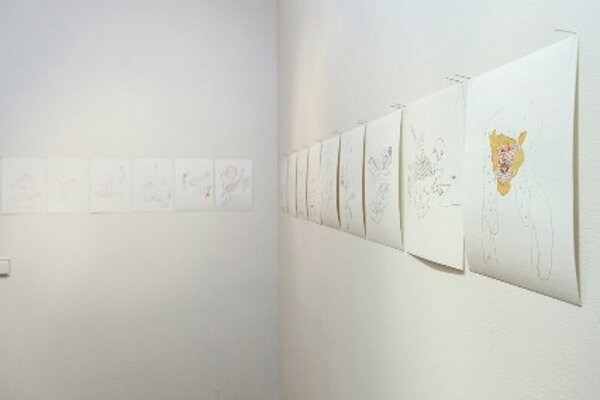 THE JOINT exhibition of Moussa Kone and Svätopluk Mikyta called Follow the Line presents a less common approach to visual art: diaries done in the form of drawings.

“The difference between them lies in the fact that Kone focuses solely on drawing, while Mikyta seeks multimedium overlapping with other genres like graphic art, objects and installations,” curator Gabriela Kisová told The Slovak Spectator at the opening of the exhibition in the Krokus Gallery. “Another difference is that although both authors drew one drawing per day, Kone did so in 2009 and made a completed cycle which he does not continue anymore, while Mikyta has been doing this since the 1990s until now; so we bring a more extensive overview,” she added.

Kone is an Austrian artist and the founder of the Art Critics Award (2006-2011) and the Kunstklappe culture centre. Mikyta studied in Bratislava, Stuttgart and Berlin, and won the Oskár Čepan Award in 2009 and the Strabag Art Award in 2011.

Mikyta pointed to one thing which he and Kone have in common: “We both received the Strabag Art Award and we both stayed in New York at an artistic residence in ISCP.” Kisová added that until this exhibition, the artists had never previously met and had never confronted each other’s work.

The diary drawings fill the first room of the modest gallery, while in the second room, the artists’ most recent work is exhibited: Mikyta’s “Curtain” (2013) is a collage consisting of four parts, combining drawing with lino prints on old office forms, monotypes of reproductions of forgotten books and re-paintings, while also including older diary drawings. Moussa Kone’s “Writing Table” is a play on words, being a desk meant for writing, with legs in the form of the Greek letters Alpha and Omega. “The drawing on the ‘ritual table’ is also a metaphorical depiction of how art is created,” the curator said.