AFTER a more than two-year-long tug-of-war over one of the most powerful posts in the country, in a Smer-orchestrated secret ballot, Jaromír Čižnár, a former law-school classmate of Prime Minister Robert Fico, was elected to become Slovakia’s candidate for the general prosecutor on June 18. The opposition parties did not attend the vote in parliament, arguing that the country already has a nominee for general prosecutor - Jozef Čentéš - whom parliament elected back in June 2011, but whom President Ivan Gašparovič has since refused to appoint. A complaint lodged by Čentéš against the president’s refusal to appoint him is pending at the Constitutional Court, with Čižnár saying that he would step down to make way for Čentéš only if the court rules that he violated Čentéš’ civil rights by seeking election. 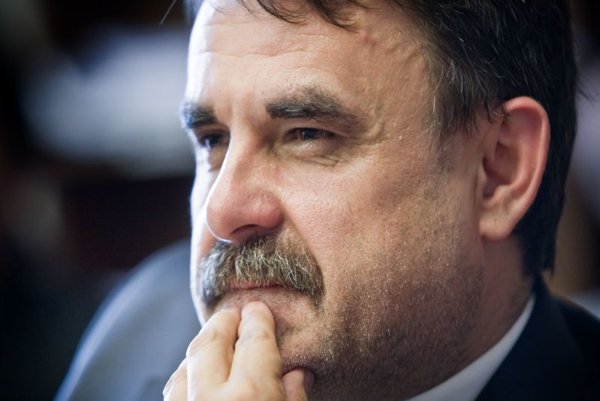 AFTER a more than two-year-long tug-of-war over one of the most powerful posts in the country, in a Smer-orchestrated secret ballot, Jaromír Čižnár, a former law-school classmate of Prime Minister Robert Fico, was elected to become Slovakia’s candidate for the general prosecutor on June 18. The opposition parties did not attend the vote in parliament, arguing that the country already has a nominee for general prosecutor - Jozef Čentéš - whom parliament elected back in June 2011, but whom President Ivan Gašparovič has since refused to appoint. A complaint lodged by Čentéš against the president’s refusal to appoint him is pending at the Constitutional Court, with Čižnár saying that he would step down to make way for Čentéš only if the court rules that he violated Čentéš’ civil rights by seeking election.

Of 82 deputies present, 82 Smer deputies voted for Čižnár, who must now be formally appointed by the country’s president. The opposition left the parliamentary hall after the discussion over the election of the general prosecutor, with Speaker of Parliament and Smer nominee Pavol Paška saying that the opposition “is fleeing like rats from a ship”.

Let’s offer Mr President finally a candidate for whom the people are waiting, said Paška, as quoted by the Sme daily a few minutes before the vote.

The election took place in spite of the fact that the Constitutional Court has yet to rule on a complaint by Čentéš in which he is seeking to have such a vote blocked. The opposition parties called it a black day for the constitution in Slovakia.

Čižnár, born in Handlová in 1964, has been working for the prosecution for 24 years. He graduated from the Law School of the Comenius University in 1986 and started working for the district prosecution in Bratislava. Čižnár was appointed as a prosecutor in 1989 by then general prosecutor Pavol Kis. Čižnár declared that he was not a member of any political party and that in 1988 he refused to join the Communist Party. As of February 1991, he was moved to the city prosecution, but after a month he returned to the district prosecution. Since 2004, Čižnár has been leading the Bratislava regional prosecution, according to Sme.

“We will have a prosecutor of one party,” chairman of the Christian Democratic Movement (KDH) Ján Figeľ said, as quoted by the SITA newswire, adding that after the ruling party Smer failed with its interventionist amendment to the law to push through its interest at the Constitutional Court, the party is moving the whole process to parliament, where Smer has a majority.

Chairman of the Slovak Democratic and Christian Union (SDKÚ) Pavol Frešo failed to push through his request for Čižnár to appear in parliament ahead of his election.

“For the first time since 1989 we will have a general prosecutor who will be elected by one party only,” Frešo said on June 18, arguing that he has the right to look into the eyes of the candidate and ask him what he thinks about it, SITA reported.

Lucia Žitňanská, former justice minister, said that today’s election is a breaking point for the country, suggesting that the tragedy of this story and the tragedy of Slovakia is that the country’s constitutional bodies, all of which had something to do with this election, have gradually failed, Sme reported.

Čižnár would not step aside

The parliamentary committee recommended that the deputies elect Čižnár to the post.

Yet, during the parliamentary committee hearing, Čižnár did not offer a direct answer to the question of whether he considers Čentéš to be the rightfully elected general prosecutor, and responded that Čentéš was “rightfully rejected”.

“I value the professional qualities of Mr Čentéš,” said Čižnár as quoted by SITA, adding that if he is elected, he would like to cooperate with him without specifying in what position he envisions Čentéš serving. Čižnár met with Čentéš last week, but remained tight-lipped about details of the meeting.

Čižnár denied allegations that as a general prosecutor he will serve any particular interest, adding that if politicians receive any information about him taking the side of any political party, he will resign, according to the TASR newswire.

Čižnár said he would have no problem prosecuting even members of Smer, as reported by Sme.

Fico has now stated on several occasions that “there is no constitutional obstacle which would prevent the election of a new general prosecutor”, and announced his intention to elect another general prosecutor.

“Prosecutors have picked among themselves Jaromír Čižnár in a very unambiguous way to be the candidate for the general prosecutor, considering his professional and human qualities,” Fico said in a statement on June 13.

The Council of Prosecutors, which represents the interest of prosecutors under the General Prosecutor’s Office, said on June 11 that it would welcome a timely resolution to the unfavourable situation in which Slovakia remains without a general prosecutor. Back in January, the council recommended Čižnár for the post. He responded that he would not confirm his candidacy until he learned whether the Constitutional Court intended to issue an injunction based on Čentéš’ complaint. The council, which has since been re-elected, has not been asked for a fresh opinion on Čižnár’s candidacy, according to SITA.

Special prosecutor Dušan Kováčik said he considered Čižnár to be the most suitable candidate for the post of general prosecutor.

“I think that the Office of General Prosecutor – after two years when it has not had its top post filled and has become a target of different attacks, be they power or political fights – deserves a general prosecutor who will restore its credibility,” Kováčik said, as quoted by SITA.

Kováčik described Čižnár as a capable person who also is a “career prosecutor who over the decades, [based on] his uncompromising nature and sense for justice and professional qualities, has gained the respect of colleagues”.

Around 60 people attended a protest organised by the political ethics watchdog Fair-Play Alliance, calling on parliament to refrain from electing Čižnár, since the act would violate Čentéš’ rights. Some opposition deputies and representatives of the US Embassy also attended the protest on June 18.

“The deputies promised that they would keep the constitution and work in a way that they are implementing it to life,” the alliance said, as quoted by Sme. “The Constitutional Court said that the president cannot refuse a candidate to the post of general prosecutor for any reasons of caprice.”

The alliance insists that until the court hands down a decision, Čentéš is still a possible candidate for the top post.

The process of finding a new general prosecutor began in late 2010, a few months before incumbent Dobroslav Trnka’s term in office was due to expire. The four-party centre-right coalition led by Iveta Radičová failed to agree on a single candidate, while Trnka, whose re-election Radičová had publicly opposed, gained the support of opposition MPs. After a secret ballot in early December 2010 in which Trnka came within a single of vote of being elected, the governing parties moved to change the parliamentary rules to allow a public vote. Meanwhile, they settled on Čentéš as their preferred candidate.

After a series of parliamentary manoeuvres in late 2010 and early 2011 in which open balloting was approved – but then challenged by Fico and other Smer MPs at the Constitutional Court – Čentéš was ultimately elected in June 2011, ironically via a secret ballot. However, President Gašparovič then declined to formally appoint him, citing various Constitutional Court cases that had emerged relating to Čentéš’ election.

In October 2011 the Constitutional Court ruled that both secret and open ballots were legitimate means for parliament to elect the general prosecutor. Finally, in late 2012, the Constitutional Court ruled that the president has the right to refuse to appoint parliament’s choice of general prosecutor, but that he must cite valid reasons for doing so. At the very end of 2012, Gašparovič sent a letter to the speaker of parliament in which he formally rejected Čentéš. Čentéš promptly appealed his decision to the Constitutional Court, claiming that his rights had been infringed, but the case became bogged down after he and Gašparovič between them challenged 12 of the court’s 13 judges on grounds of alleged bias.