COUNTRIES usually have their own tempo and follow their own political pace, but in the case of some very important events which might affect them all they are able to stick together. This has been the case in the economic crisis which has shaken the European Union wide awake and forced it to rebound, according to Herman Van Rompuy, president of the European Council, speaking during a recent visit to Bratislava. 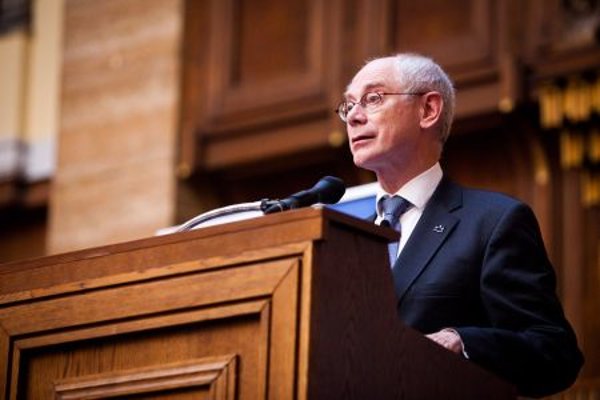 COUNTRIES usually have their own tempo and follow their own political pace, but in the case of some very important events which might affect them all they are able to stick together. This has been the case in the economic crisis which has shaken the European Union wide awake and forced it to rebound, according to Herman Van Rompuy, president of the European Council, speaking during a recent visit to Bratislava.

Though the economic crisis is still not over, the EU has shown that it is able to withstand testing times, and that the countries are more tightly knit than they might have expected.

“Today I can confidently say that at least the most acute phase of the financial crisis is over: the threats to the very existence of the euro and the eurozone have been overcome,” Van Rompuy said during a public debate held on June 12 at Comenius University in Bratislava.

He said this was very important since “restoring financial stability was a pre-condition for all else, because without it confidence cannot hold”.

Slovak Prime Minister Robert Fico said that some signals, like the decrease in the interest rates of some state bonds, and the overall stabilisation of the financial markets indicate an improvement in the situation.

The politicians’ speeches were part of an event entitled the National Convention on the European Union, which is intended to inform people about the EU and its processes. Foreign Affairs Minister Miroslav Lajčák, whose ministry organised the convention together with the Center for European Affairs, a pro-European Bratislava-based NGO, told the audience that the convention’s aim is to contribute to a society-wide consensus on European issues through discussion about the future of the EU.

Fico also stressed the importance of close cooperation within the EU during the crisis, saying that Slovakia is connected to the European political and economic space. In this respect, “Slovakia does not have any other than European alternative”, he added.

Among other things, EU member states have had to deal with economic problems. National governments had to deal with them and in the process they often turn around growth models which were based on excessive private and public debt, Van Rompuy said.

“Across Europe, bold structural reforms are being launched, to restore, eventually, sound economic fundamentals in all our countries,” the president told the audience.

Slovakia has also had to combat an increasing budget deficit and debt by imposing consolidation measures, which in Fico’s words is not an easy task, especially if the country also tries to keep its economy growing. Therefore Slovakia is ready to discuss ways to optimise the tempo of consolidation so that countries are also able to create room for investment, Fico added.

Growth and jobs a priority

Regarding the creation of jobs and actions to combat unemployment, the president mentioned the problem of youth joblessness since “young Europeans are twice as likely to be unemployed as the rest of the adult population”. In Slovakia, for example, youth unemployment stands at about 34 percent.

“Faced with such a dramatic situation, all European countries have pledged that no young person is left without a job, further education or training after four months of leaving school,” Van Rompuy told the audience, adding that he has already called on European leaders to come up with ideas to combat youth joblessness.

Fico responded that thanks to the re-allocation of unused money from EU structural funds Slovakia was able to create about 10,000 new jobs for young people.

He also praised the initiative of the EU to allocate about €6 billion for 2014-20 to support employment in regions where youth joblessness exceeds 25 percent, and the recommendation of the European Council to establish so-called guarantees for young people thanks to which every person younger than 25 years will be offered a job, apprenticeship, education course or traineeship within four months of being registered with the labour office.

“This aim is ambitious but we must not waver over difficult challenges,” Fico said.

Though there were some fears that European politics might be subject to increased nationalism, the opposite proved to be the case, Van Rompuy asserted, adding that “what we are living through is rather the Europeanisation of national politics, and ultimately I am convinced it will make our common endeavour stronger”.

He explained that since countries now know that what happens in one state might affect the others, it affects the view of their citizens about Europe and themselves as Europeans.

“Now this has come under pressure, under doubt: for the very first time, we have to defend the European idea,” Van Rompuy told the audience. “We have to prove that our approach on tackling the crisis produces concrete results, in terms of growth and jobs. That Europe is the solution and not the problem. And that the union is ‘us’.”

When presenting his vision of Europe, Fico said it should be “useful and understandable for citizens, reliable for businesspeople and readable for [its] partners”.