THE BRATISLAVA Puppet Theatre’s (BBD) biennial international festival took a new approach this year: it targeted some of its performances at adult audiences. 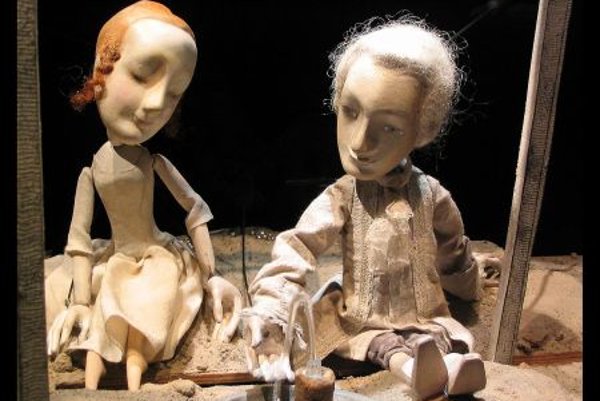 Salieri’s Moon, by the Puppet Theatre Brest, from Belarus (Source: Courtesy of the Festival of Bratislava Puppet Theatre)
Font size:A-|A+0

THE BRATISLAVA Puppet Theatre’s (BBD) biennial international festival took a new approach this year: it targeted some of its performances at adult audiences.

“After a performance, I usually say: Dear children, how did you like it?” BBD head Ján Brtiš said after a festival play for adults on June 15. “But this time, it was different. I could ask adults how they liked it… For the first time, we included in the festival a theatre performance for adults, so that they don’t need to bring children in order to have a reason to come.”

The festival, which took place between June 13 and 16, offered two pieces for adults: Salieri’s Moon, on Saturday evening, and Sleeping, on the Sunday evening. Salieri’s Moon was a production by the Puppet Theatre Brest from Belarus that involved quite a lot of dialogue in Russian, but also a lot of music by both Salieri and his rival Mozart – enough that even non-Russian-speaking audiences could enjoy the performance. Anyone familiar with the traditional story of musical rivalry and envy, mediocrity and brilliance, was able to follow the play.

Another play meant for adults was Sleeping, a piece exploring the border of dreams and reality, without words – and thus better understandable for all. It was played by the La Capra Ballerina troupe from Acquapendente in Italy. It was the final and concluding piece of the whole festival.

However, most productions were still aimed at children, and since they were performed by theatres from Germany, Slovenia, Switzerland, and Hungary – as well as Slovakia and the Czech Republic, the language of which is understood in Slovakia – The Slovak Spectator asked the spokesperson of the theatre about the need for translation.

“We usually don’t translate plays,” Lujza Kittlerová of BBD answered. “This year, the pieces played in German will be translated, but otherwise we try to arrange for children learning the due language to come and be able to follow the plot.” She added that as the productions are mostly intended for children, they can often be understood without many words. “Sometimes, we were surprised how well the child audiences are able to understand.”

The festival also had an accompanying programme which took place partly at the Puppetry Department of the Academy of Performing Arts in Bratislava, and partly in the park opposite the BBD theatre in Dunajská Street, in downtown Bratislava. After a long spell of rainy weather, the weather was mercifully dry, allowing for a musical show by the pupils from the Karloveská Elementary Art School on Thursday, an open-air show on Friday, and a circus workshop for children on Sunday, teaching them some acrobatic skills in a playful way. Ivan Gontko accompanied the whole festival on his hurdy-gurdy, a kind of mechanical violin, and tried to evoke the atmosphere in which puppet theatre was initially performed: at markets, festivals and with merry-go-rounds.

Brtiš, who as well as heading the BBD was the organiser of the festival, stressed that the Bratislava festival is the only one in Europe that is non-competitive and has a different slogan every two years. In 2013, the motto was the “Great World of Small Heroes”, meaning children and their perception of the “adult world” rather than the cliché of “big action heroes”. Apart from comparing the production of different puppet theatres from different cities and countries, the goal of the festival was also to teach children to come to their local theatre more often – and to boost their creativity, Brtiš summed up.