EVENTS in museums, galleries and even churches that allow access to areas normally closed to the public are growing in popularity. Not only are they attractive to visitors, but they are proving to be beneficial to the sites themselves. A number of parks and gardens - places typically perceived as already being open and accessible - have begun opening up to the public as well. 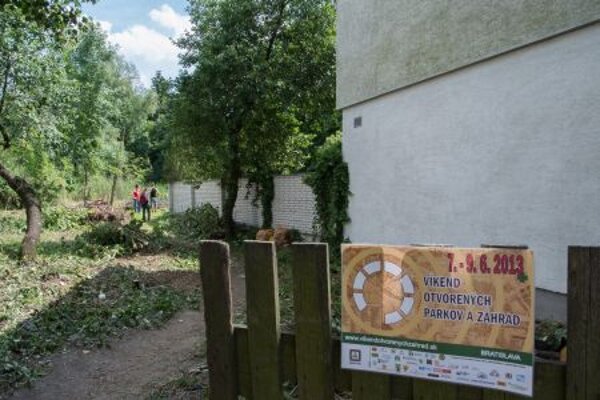 EVENTS in museums, galleries and even churches that allow access to areas normally closed to the public are growing in popularity. Not only are they attractive to visitors, but they are proving to be beneficial to the sites themselves. A number of parks and gardens - places typically perceived as already being open and accessible - have begun opening up to the public as well.

The Weekend of Open Parks and Gardens on June 7-9, 2013, allowed the public to visit numerous sites, not just in the capital but also around the country, including the mansion in Dolná Krupá, and parks in Topoľčianky, Brodzany, Turčianska Štiavnička as well as the arboretum in Liptovský Hrádok, among others. Some sites offered lectures, presentations and culinary tastings.

Bratislava’s Prüger-Wallner garden, located in the upscale neighbourhood surrounding Horský Park, is usually closed to the public. A volunteer who gave a guided tour of the garden noted that it was a small miracle that such a space escaped the attention of city planners and developers. The park was established at the end of the 19th century, when owners of the local Savoy and Carlton hotels built a villa in Havlíčkova Street. They cultivated the adjacent space, transforming part of it into a decorative garden, and using the rest of it as a productive garden (four greenhouses and a boiler-room to heat them are still standing on the southern part of the property). Landscape architecture students presented their ideas for re-cultivating the plot – which occupies 5,000 square metres – during the weekend: it should be again divided into several sections, including two productive gardens, a leisure park, a bee-keeping facility and more. However, the final plan has not yet been approved and is subject to further discussion.

Another garden not normally open to the public is a remnant of the once huge herbal garden of famous Bratislava pharmacist Felix Pisztory, which lies behind the late 19th-century palace of the same name. The portion of the garden that remains was used to grow medicinal herbs. In this section, gardening apprentices replanted patches of such herbs - and some vegetables, a selection of which were sold to visitors on the “opening weekend”.

Behind the Pálffy Palace on Zámočnícka Street, there was a presentation of a “virtual garden” that now exists only in old pictures. Pavol Pálffy, a senior official of the Austro-Hungarian Empire, transformed the Renaissance garden into a Baroque one. The garden was dominated by a huge linden tree surrounded by scaffolding that enabled nobles and burghers to enjoy the aroma of the flowers, the bulletin for the event informs.

Other events over the weekend included a discussion with Tamara Reháčková, the author of a book about historical gardens in Bratislava, as well as an exploration of traditional African, Islamic, Turkish, Kazakh, Iranian, Latin-American, American and Breton cuisines in the “presidential garden” behind Grassalkovich Palace, and access to the mobile garden on Sasinkova Street.

The Weekend of Open Parks and Gardens (www.vikendotvorenychzahrad.sk), organised by the Národný trust (National Trust of Slovakia), offered new information and new views, not only for visitors, but for Bratislava natives who are interested in their hometown, but do not always get the chance to explore all of its hidden corners.