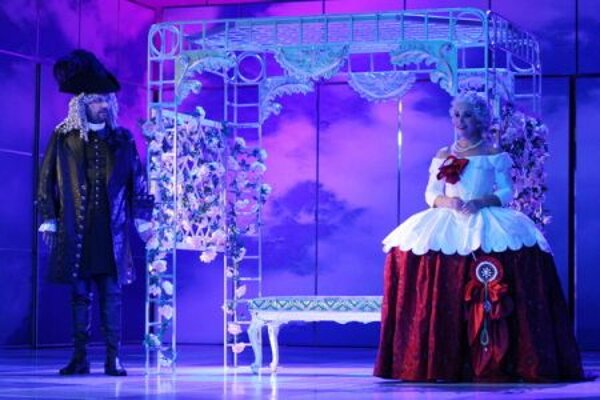 Bratislava
OPERA: THE LAST performance, at least in this run, of Maria Theresia, a neo-romantic opera in three acts by contemporary Austrian composer Roland Baumgartner, takes place on June 26, 19:00, in the historical building of the Slovak National Theatre in Hviezdoslavovo Square 4 in Bratislava. The operetta-style piece, conducted by Marián Lejava, directed by Ladislav Adamik and sung by Katarína Juhásová-Štúrová, Miroslav Dvorský and Theodore Coresi in German with Slovak subtitles, evokes the central-European atmosphere of the era dominated by Habsburg monarch Maria Theresa. Tickets cost €7 to €30 and can be obtained by calling 02/2047-2299, or via www.snd.sk.

Bratislava
FOLKLORE: Dalal from Bethlehem, Palestine, with the Ekonóm folklore ensemble – The evening brings together a Slovak and a Palestinian ensemble, comparing the traditions of the two folklores.
Start: June 24, 19:00; Zrkadlový háj House of Culture, Rovniankova 3. Admission: free. Tel: 02/6829-9225; www.kzp.sk.

Bratislava
FESTIVE MASS: The Slávnostná omša pri príležitosti 1150. výročia príchodu Cyrila a Metoda na Veľkú Moravu / The Festive Mass on the Occasion of the 1150th anniversary of Arrival of Ss Cyril and Methodius in Great Morava introduces the Choir of the City of Bratislava and soloists Andrea Čajová, Radoslava Mičová, Jozef Graf and Gustáv Beláček, as well as Peter Mikula on organ, as conducted by Ladislav Holásek.
Starts: June 29, 19:00; St Martin’s Cathedral, Rudnayovo Square. Admission: €5. Tel: 02/5293-3321; or through www.ticketportal.sk.

Bratislava
THEATRE IN ENGLISH: Uncertain Ground (intra-species aggression) – The alternative theatre company Stoka transformed its Slovak play Neistý grunt into English, which was picked for the New York International Fringe Festival. Bratislava audiences now get a chance to see this “performance conceived by the method of collaborative creation, by means of improvisation, with no specific goals being set in advance”. Directed by Blaho Uhlár, the piece is performed by Braňo Mosný and Peter Tilajčík.
Starts: June 30, 20:00; A4 Nultý priestor, Karpatská 2. Admission: €3.50-€6. Tel: 02/5292-4470; www.a4.sk.

Schloss Hof
HISTORY/GASTRONOMY: Great Baroque Feast – On the occasion of the 350th birthday of Prince Eugene Savoy, an exclusive celebration re-enacting a period feast is organised at the Schloss Hof palace near the Austro-Slovak border. Part of the event is a true-to-reality Baroque reception for which tickets have to be bought separately. Entertainment is prepared for the whole day, and for the later part, fireworks, a fashion show and a night-long performance are on offer.
Starts: June 29, 18:00; Schloss Hof, between Marchegg and Hainburg (there is a shuttle bus from Marchegg). Admission: €29-€99 (gourmet-ticket). Tel: 043/22852-0000; www.schlosshof.at.

Kežmarok
EXHIBITION: THE JOINT exhibition by Jozef Jankovič and Palo Macho presents two famous Slovak artists – the latter transformed the designs of the former, a sculptor, into glass. Glass plates in the Galéria U anjela / At the Angel Gallery, Starý trh 53 in Kežmarok show – until July 17 – human torsos, screams for help but also mementoes proving everyday chances of resurrection of humans. This is Jankovič’s first attempt at glass; and it can be seen afternoons Tuesdays to Fridays and on Saturday mornings for free. More information can be found at www.galeriauanjela.sk.

Žilina
ANIMATED CARTOON FESTIVAL: Fest Anča 2013 – This international festival of animated cartoons turns Žilina into a Mecca of this genre, offering a host of Slovak and foreign films in several local venues, a competition and – organised by the Žilina-Záriečie culture hub – also brings Mike Reiss, a writer and producer on The Simpsons.
Starts: June 27-30; various sites. Admission: €2-€5 (one-time tickets), €10-€22 (for the whole festival). Tel: 041/5005-064; www.stanica.sk.