“IT IS a media hoax up to 95 percent,” commented Prime Minister Robert Fico on June 26 about allegations of large-scale embezzlement of state funds via the country’s military intelligence agencies during Fico’s first government term (2006-2010) the same day the police started a criminal investigation of the allegations. The Special Prosecutor’s Office, however, remained tight-lipped about releasing further details based on what it called “the degree of confidentiality and the ongoing investigation”. 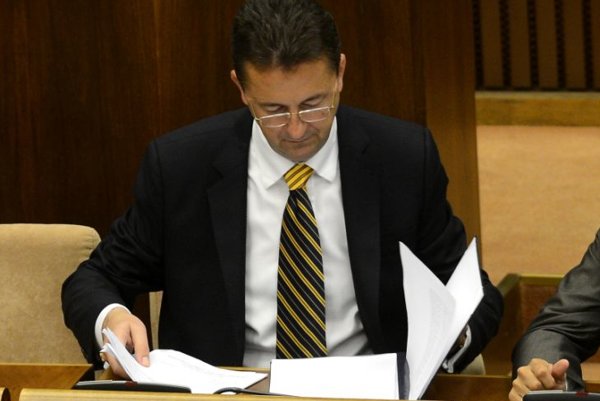 “IT IS a media hoax up to 95 percent,” commented Prime Minister Robert Fico on June 26 about allegations of large-scale embezzlement of state funds via the country’s military intelligence agencies during Fico’s first government term (2006-2010) the same day the police started a criminal investigation of the allegations. The Special Prosecutor’s Office, however, remained tight-lipped about releasing further details based on what it called “the degree of confidentiality and the ongoing investigation”.

The police arrested and held Roman Mikulec, the former head of the Military Intelligence Service (VSS), for two days over what they termed a suspicion of leaking confidential information after searching his car on June 22. Mikulec’s comments had initiated the inquiries into the possibility that state funds were embezzled. The Special Prosecutor’s Office said that confidential documents were found in Mikulec’s car, wrote the Sme daily, which had originally written a story about the alleged embezzlement based on an anonymous document the daily received earlier this year.

A reporter with the Hospodárske Noviny daily, Martina Ruttkayová Tvardzíková, said on June 26 that she would file a complaint against the police over what she called an intimidating interrogation that occurred after she submitted to the police confidential documents that she had received pertaining to the VSS.

Sme reported that the police had asked Tvardzíková whether it was appropriate for her as a mother to maintain contacts with someone like Mikulec who is under criminal investigation. Mikulec has been accused of leaking confidential information.

“She can submit a complaint and it would be checked,” responded Interior Minister Robert Kaliňák to Tvardzíková’s statement that she would file a complaint against the police, the SITA newswire wrote on June 26.

The Special Prosecutor’s Office has already stated that after looking into the procedures of the police investigators it did not find any violation of the rules for interrogation of a witness. However, Tvardzíková, who covers military intelligence issues for her daily, said that instead of just the formal act of submitting the documentation she had, which should have lasted a few minutes, the police began to pressure her to disclose her sources. Sme reported on June 26 that the police also collected DNA and fingerprints from Tvardzíková to compare these to the envelope she submitted.

“They want to intimidate everyone who knows something,” Tvardzíková told Sme, suggesting that Police President Tibor Gašpar also recommended that she not be involved with the case any further.

Gašpar, however, said that he had told Tvardzíková that when she is involved in a case as a witness it would be more appropriate if her newspaper assigned another reporter to cover the story. Regarding the suspicions of embezzlement, Gašpar said that the police would provide information to her in the same way as to other journalists, Sme wrote.

The Slovak Syndicate of Journalists (SSN) expressed concern over Tvardzíková’s claim that police investigators had exerted unjustifiable pressure on a journalist and had used psychological pressure as a form of intimidation, SITA reported. In its statement the SSN said that the status of journalists and protection of their information sources is inextricably linked in a democratic society with keeping the public informed and that “unacceptable pressure by state bodies or the police is an intervention against the essence of a democratic system”.

On May 16 Sme published the first story about suspicions of embezzlement, citing an anonymous 134-page file that was apparently leaked from the military intelligence agencies. The file reportedly contains information about alleged fraud related to 15 expensive residential properties in Bratislava as well as cars that reportedly ended up in the personal ownership of VSS officers and their relatives. Both of the previous directors of the two military intelligence agencies – Juraj Šebo of the VSS and Ľubomír Skuhra of the Military Defence Intelligence (VOS) – allegedly knew about these transactions, Sme wrote. The military intelligence services were restructured and merged in January 2013 and the successor agency, Military Intelligence (VS), is now led by Skuhra.

The file was prepared when the VSS was led by Mikulec and Sme wrote that the paper copy of the document was shredded on his orders. Mikulec now says that he took the action in order to prevent “handling the material in question in a way that would have thwarted the use of all evidence in the investigation of the entire case by competent bodies”, Sme wrote.

On May 25 Defence Minister Martin Glváč asserted that it is “provable” that no embezzlement ever occurred. The defence minister based his statement on an inquiry into the apparently-leaked report Sme provided to the Special Prosecutor’s Office and to the parliamentary oversight committee.

Subsequently the Sme reporters anonymously received a copy of another file regarding an investigation of Robert Tibenský, the current deputy director of the merged Military Intelligence (VS) agency, which Sme wrote a story about on June 12. The six-page file dated February 8, 2010 alleges that Tibenský abused his powers in 2004-2008 when he made arrangements to rent four apartments, office space and a garage that were to be used by the intelligence service but that allegedly were eventually used for his personal benefit. The copy of the document that the daily received was addressed to Šebo, the former director of VSS, according to Sme.

Prime Minister Fico stated that if it is proven that there have been questionable deals involving property at VSS and VOS, Glváč should ensure that there are consequences for those involved. But as Glváč did earlier this year, Fico also expressed scepticism about the authenticity of the allegations.

Recently a former VSS officer, Katarína Svrčeková who identified herself as a close friend of Mikulec, also told the media that she had been subjected to bullying regarding the allegations of embezzlement.

“It cannot reoccur that some ‘Ms. Blondie’ or anyone else appears and begins to say whatever they want about the secret services,” Fico said on June 26 in reference to Svrčeková, as quoted by the TASR newswire.

Svrčeková claimed that she was subjected to strong pressure and discrimination by people who were trying to find something compromising against Mikulec. Svrčeková said she notified Tibenský as well as Peter Vojtek, the head of the Slovak Army, and Defence Minister Glváč about her concerns.

Fico also said that if anybody who ever worked for the secret services appeared before TV cameras to say whatever they wanted, the entire secret-service establishment could well be closed down, adding that by revealing information to the media Svrčeková had violated the law and must be punished, TASR wrote.

In late May Mikulec said he was concerned that important documentation pointing to embezzlement was being shredded by the military intelligence agency. Svrčeková on June 22 called the police search of Mikulec’s car part of intimidation of the person who had led the VSS in the past and who had started inquiries into the possible embezzlement.

The leader of Freedom and Solidarity (SaS) party, Richard Sulík, said he would inform NATO Secretary-General Anders Fogh Rasmussen about the alleged embezzlement at the VSS, TASR reported. Under the previous government of Iveta Radičová the defence ministry was led by a SaS nominee, Ľubomír Galko.

The Slovak parliament’s defence and security committee, with a majority of members from the ruling Smer party, approved a statement on June 26 that Galko’s comments about the military intelligence agencies threatens the armed forces and belittles the work of Slovakia’s professional soldiers. The committee met at the request of Galko who had suggested that the functionality of armed forces is threatened by the suspicions of embezzlement.

Since the allegations became public, claims and counterclaims have flown back and forth between Galko, who was sacked in late 2011 over a scandal involving VOS counter-intelligence operatives wiretapping journalists, and Glváč who later appointed one of the main persons possibly involved in the alleged embezzlement scandal to head the newly-established VS.

SITA reported that Mikulec said that since the suspicions were first publicised by Sme nothing had happened at the VS other than “evidence being destroyed”. Mikulec also claimed that new documents are now being produced while Glváč on May 28 compared that statement to stories in a satirical magazine, according to SITA.