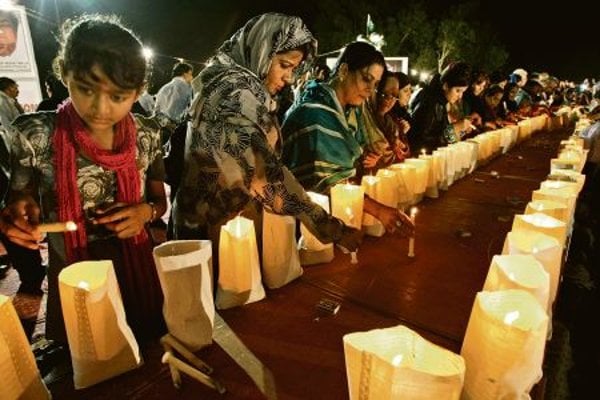 Mountain climbers Anton Dobeš and Peter Šperka were among a group of 11 people killed on June 22 in an attack on their base camp under Nanga Parbat, a mountain peak in northern Pakistan, representatives of the Slovak government confirmed on June 26. The media reported that Pakistan’s Taliban movement claimed responsibility for the attack.

“Slovakia has never been touched by terrorism as in the case of the killing of our mountaineers,” Prime Minister Robert Fico told the media.

The identity of the two men was confirmed by the Slovak consul in Iran who travelled to Islamabad, the capital of Pakistan.

Government representatives sent condolences to the families and friends of the two mountain climbers, with Fico stressing that Slovakia “resolutely rejects terrorism as a way of solving political questions and conflicts” and offered his hope that the murders will be quickly investigated, according to the official press release.

“It is even more tragic as the two of them devoted their lives to rescuing people,” said Interior Minister Robert Kaliňák, as quoted in the press release, referring to the fact that Šperka was a professional mountain rescuer and Dobeš did so as a volunteer.

Pakistani authorities plan to transport the bodies of the 11 victims to their homelands in Ukraine, Lithuania and Slovakia on a Pakistani plane that is scheduled to depart on June 27. If this plan fails to materialise, Foreign Affairs Minister Miroslav Lajčák said that Slovakia is prepared to send its own special government plane to bring the men home.

Pakistani officials confirmed that in addition to the two Slovaks, the Taliban had killed one American with dual Chinese citizenship, three Ukrainians, two Chinese nationals, one Lithuanian, one Nepali and a Pakistani guide.

The Pakistani police have so far arrested around 20 people thought to be connected to the attack.
In the aftermath of the killing spree, local authorities evacuated at least 45 foreigners who were planning to climb the mountain and the government in Islamabad placed a temporary ban on all Nanga Parbat expeditions, the TASR newswire wrote.

Peter Šperka was a 57-year-old mountain guide and professional rescuer living in the High Tatras. He recorded several successes during his climbing career, including climbs to three peaks with an elevation of more than 8,000 metres. For a long time he was among the oldest Slovaks who climbed peaks that high, the Sme daily wrote.

Anton Dobeš, aged 50, was a member of the town council in Uhrovec and worked in his own company, ELO based in Bánovce nad Bebravou, while pursuing mountaineering in his free time, the Pravda daily wrote. He was also member of the medical committee of JAMES mountaineering association, TASR wrote.

Several Slovak mountaineers reported their shock after the attack. They described Šperka as a self-sacrificing person who “lived for the mountains” as well as living in the mountains. Dobeš,

according to mountain climber Igor Koller, was also a self-sacrificing rescuer and very capable organiser who had established a medical committee within the mountaineers’ association, Sme reported.

Peter Hámor described the attack as an “absolutely senseless killing” which reminded him of the massacre of Israeli athletes at the Summer Olympic Games in Munich in 1972, the Hospodárske Noviny daily wrote. Hámor also told Sme that though he viewed the conflict as between Pakistani Sunni and Shiite groups, attacks had never been aimed at foreigners before, adding that though his feelings towards Pakistan have not changed he expects the attack will affect local residents who provide services for mountain climbers.

Another mountaineer, Ivan Fiala, said that the tragic attack might affect tourism in the area and decrease the number of people wanting to climb Nanga Parbat and other Pakistani mountains because until now the area had been considered quite safe, Sme wrote.