INDIA’S affluent middle class, which has already explored the world’s more traditional holiday spots, might be open to travelling to new destinations where there is a market opportunity, in countries like Slovakia, Rajiva Misra, the Indian ambassador to Slovakia, suggested. Misra’s homeland saw a number of maharajas coming to Piešťany in the 1930s, with the ambassador suggesting that if a good holiday package was offered to Indians, they would likely come to Bratislava for more than just a day trip from Vienna. 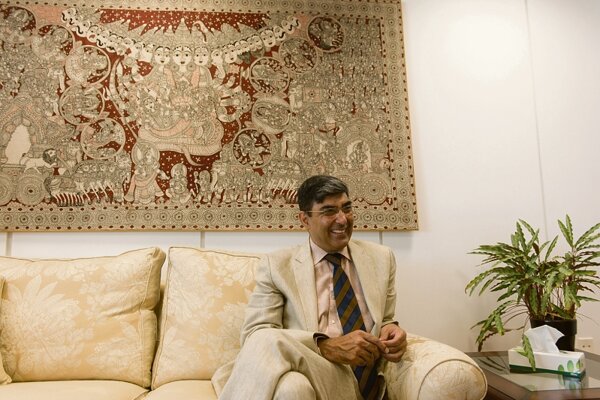 INDIA’S affluent middle class, which has already explored the world’s more traditional holiday spots, might be open to travelling to new destinations where there is a market opportunity, in countries like Slovakia, Rajiva Misra, the Indian ambassador to Slovakia, suggested. Misra’s homeland saw a number of maharajas coming to Piešťany in the 1930s, with the ambassador suggesting that if a good holiday package was offered to Indians, they would likely come to Bratislava for more than just a day trip from Vienna.

The Slovak Spectator spoke to Misra about the importance of the free trade agreement talks between the EU and his homeland, areas of the economy with mutually unexplored potential, India’s flourishing publishing industry and cultural links.

The Slovak Spectator (TSS): The EU and India in 2007 launched talks on a Free Trade Agreement and these negotiations intensified following the EU-India Summit in February 2012. In what ways will India and the EU benefit? Will Slovakia in any way benefit from this agreement?
Rajiva Misra (RM): It is an ambitious undertaking aimed at opening up the market of goods and services while easing monetary barriers, as well as other challenges that exporters sometimes face. We hope that the negotiations can be concluded soon. The European Union is interested in greater market access, for example, in automotive exports, while we are focusing on better access in agriculture and easier movement of Indian professionals to EU countries.

Slovakia would too benefit from a more intense flow of goods, services and investments between the EU and India, for example, through greater market access in auto exports. I am sure that would be of interest to Slovakia. I think that the easier movement of Indian professionals to Slovakia should help to address the problem of the qualified labour shortage in some segments, for example health services, where qualified Indian medical personnel could help.

Once you have a free trade and investment agreement, there is an enormous increase in confidence in businesses on both sides. Opportunities we might not think of straight away today would open up. When we think of hurdles in promoting business between India and Slovakia, these are indeed not hurdles, but rather a lack of knowledge on both sides: our businesses do not know enough about what they can do in Slovakia and vice versa. Yet, free trade acts as a spur to pro-actively explore opportunities – of which there are many.

TSS: What are the current main obstacles to better utilisation of existing opportunities for economic cooperation between India and the EU?
RM: The biggest challenge, as I have said, is the lack of information, which we try to address in various ways. Also, Slovakia’s economy, even though it is an open and a foreign-trade oriented economy, has been mostly EU-oriented; it is only now that Slovakia has started paying attention to markets outside the EU. China has expanded, becoming a major market for your auto exports, and we certainly hope that Slovak businesses will take greater advantage of the big Indian market.

TSS: What about administrative issues or visa requirements?
RM: It’s always a time-consuming process for Indian businesspeople and tourists to obtain Schengen visas and for businesspeople, time is money. Certainly, easing this administrative burden will be critical for expanding economic relations.

TSS: India, similar to Slovakia, has a very strong automotive industry. What are the reasons behind the size and the strength of India’s auto industry? What are the challenges currently facing the industry?
RM: The biggest driver of the growth of the Indian automotive industry in the past 10 years - we have seen 15 percent growth annually - is the growing middle class and the consumer market along with it. Then there is also the availability of a large set of manufacturing skills in different areas at competitive costs in India. Our car production figure has reached about four million vehicles every year, which is significant locally rather than in a global comparison. We produce relatively smaller and more affordable cars, while fuel efficiency tends to be extremely important.

TSS: Do Indian automotive companies cooperate with Slovak carmakers in any way? What are the prospects for cooperation in the future?
RM: There are interesting opportunities, especially with small and fuel-efficient cars. There have been discussions in the past about a venture for production of battery-operated cars by a company in Slovakia. There are large opportunities within the Indian auto-components manufacturing sector. You have a very large auto industry and the auto-components sourcing by large manufacturers has not yet been adequately explored by our people.

TSS: What are other areas of the economy where you see potential for cooperation between India and Slovakia?
RM: I see a number of niches in the Slovak economy, including technology consultancy in the construction sector, as well as the power sector, as Slovakia has a developed nuclear energy industry. Agriculture also offers some unexplored opportunities. I am very inspired by the cooperation of Indonesia and the Agriculture University in Nitra [the project explores growing special types of grains suitable for Indonesia].

TSS: Slovak Foreign Affairs Minister Miroslav Lajčák recently visited India. What was the purpose of his visit and could you list some specific results or plans that stem from this trip?
RM: The visit of Foreign Affairs Minister Lajčák was the first contact at the level of our foreign ministries since 2008 when Mr Ján Kubiš visited India, so this trip was to ensure continuity in the high-level political dialogue. Along with meeting his Indian counterpart and the vice president of India, as well as the minister of defence, Mr Lajčák also visited Mumbai, where he had interactions with businesspeople, visited the Mumbai stock exchange and had meetings with the Indian engineering company Larsen & Toubro and the governor of the state of Maharashtra.

As for the outcomes of the trip, I understand that there was apparently good interaction in the area of clean energy and defence technologies, which is a sector in which our private companies are extending their operation.

TSS: The intergovernmental committee for commercial and economic cooperation, the Indo-Slovak Joint Committee, will hold its 7th session in Bratislava between July 11 and 12. What will be its main topics and objectives?
RM: At the time the joint economic committee was established some years ago, the idea was that it would meet every year, or at least once in two years, to address problems of businesspeople as well as to review if there is an agreement that needs to be signed between the two governments. Unfortunately, the last time it met was in 2006. Yet, I see the meeting planned for July 11 and 12 as promotional because we are meeting at the level of ministers and we expect few business representatives. The sectors we are looking at would be auto accessories, clean energy and manufacturing. Tourism, including the wellness and spa sector, will also be an issue to discuss. There are some Ayurvedic spas in Slovakia that have been active for some time, but I think the cooperation has not taken place on a bigger scale, or in a more organised fashion.

TSS: Indians used to be frequent clients of Slovak spas. How do you see prospects for their return? Do you see any potential for Slovak-Indian cooperation in spa tourism?
RM: In the 1930s we had a number of maharajas coming to Piešťany, so it became a popular destination for wealthy families. It would be similarly attractive for affluent Indian tourists today. What is lacking there, clearly, is a product package that can be marketed to people straight away, for example, a one-week visit programme that could be offered to Indian tourists. Such a programme could include two days in the High Tatras, two days of sight-seeing in Bratislava and three days of wellness and spas in Piešťany. When I meet Indians in the Old Town, especially on the weekend, and I ask them where they are from, they are typically coming for a one-day tour from Vienna and then they go back.

TSS: Back in 2012 Slovakia recorded its highest ever number of visitors from China, India and Russia. What are, in your opinion, the reasons behind the increasing number of Indians who are discovering Slovakia?
RM: The middle class is becoming more affluent, while holidays abroad are becoming more important for this group of affluent, urban Indian people. There is a group now which has done the traditional destinations and this is where there is a market opportunity for a country like Slovakia. The problem, also, is that we have not been able to market Slovakia as well among Indian tourists. Yet I think there is a good awareness of India among Slovak people.

TSS: In Western countries the print press has been suffering while in India the print industry is actually booming. What is the reason behind this phenomenon?
RM: I think the main reason behind the strong publishing industry and the growing sales of books is the growth of the economy as well as the growing level of education. At the same time, internet access is not universal and, thus, there is a space for books and articles to grow. Once internet access becomes universal we will run into the same problem. We publish about 100,000 books a year and I was surprised to learn that we print them in about a 100 different languages. Indeed we have 22 official languages in which books are printed, but apparently, books are also printed in different dialects. Other reasons include that we have a wide availability of skills, like editing and type-setting skills while these are also available in the English language for affordable prices.

TSS: Are Slovaks, in your opinion, familiar with Indian culture? How do you assess their interest in Indian culture?
RM: I am afraid this is an area where we have not done as much as we could. The Indian Council for Cultural Relations is a body that has been supporting cultural exchange, but for budgetary reasons they are now increasingly looking at the visits of culture troupes from India as being self-supporting. But I believe there is enough interest in quality performances, music and dance, as well as classical music and dance that has a growing market in Slovakia, which means it is possible for performances to be self-financing.