Multiple visions of India charm many Slovaks in April

DESPITE how far removed Indian culture may feel from Slovak culture, it nevertheless seems to enjoy a considerable degree of popularity here. It is not very often, however, that Slovaks get the chance to experience the various facets of Indian culture in one event, as was the case in early April when an entire evening was dedicated to Indian culture, philosophy and its impression on Europeans. 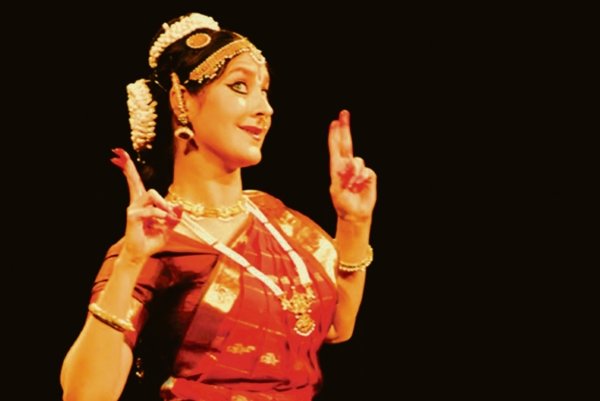 DESPITE how far removed Indian culture may feel from Slovak culture, it nevertheless seems to enjoy a considerable degree of popularity here. It is not very often, however, that Slovaks get the chance to experience the various facets of Indian culture in one event, as was the case in early April when an entire evening was dedicated to Indian culture, philosophy and its impression on Europeans.

The Visions of India event began with a screening of Guru, a film by Hungarian Tamás Tóth, which takes audiences on a trip through India’s sacred sites in search of a true Guru, or rather, the true meaning of life. The film’s protagonist, an Indian expat returning home, embarks on a pilgrimage marked by a series of disappointments before learning from a man close to his idea of a spiritual leader that the best thing he can do is to stick to his true calling – his profession of teaching young boys.

The film’s musical soundtrack was played, selected and partially written by Indian composer Debashis Ganguly, whose concert made up the final part of the evening. In between, Tóth’s wife, Dora Meekaneshi Bittner, performed a classical Indian dance, called Bharata-natyam. She was not in the film, but as the person who brought Tóth’s attention to India and its music, she was pivotal in the project. Bittner, who learned classical dance from renowned Indian dancer Jayanthi Subramaniam in India, was so convincing that at times she seemed like a native of India.

Ganguly, a musician by both family tradition and education, played sitar in the April 9 concert at the Film Faculty of the Academy of Performing Arts in Bratislava, accompanied by Hungarian percussionist Péter Szalai on tabla, who gives lectures on Indian music at the Music Academy in Budapest. Ganguly is famous for composing and performing film scores, and he also likes to transcend genres and play jazz fusion.

Ganguly explained his cooperation with Tamás Tóth: “I used the theme [of the film] for my music, and Tamás used my music for the theme… For me, the idea of a man coming to Kumbh-mela, a special spiritual festival, to find a guru, and not finding one, was striking…”

He added that it was this theme that intrigued him and inspired his score for the film. Ganguly explained, however, that he is not a very religious man and that his true religion is music.
Although Guru is not representative of most domestic Indian films – of which Bollywood is perhaps the most well-known and most characteristic – it nevertheless offers an outsider’s view into Indian culture and spirituality.

The Shiraz agency, which organised Visions of India, also brought Indian classical musician Rajeev Janardan, who played a rare, ancient instrument called the surbahar, which is uncommon even in India, and was accompanied by Tibor Mótyán of Hungary on tabla.

The performance, called Connecting India, took place on July 9, 2012, in Zichy Palace in downtown Bratislava and represented a fusion of Indian and European perceptions of traditional music.

Bhajan Sopori, another performer of classical Indian music, was invited by the Slovak association of Sahaja yoga to play in Bratislava on October 12, 2012, with Durjay Bhaumik performing on tabla.

Bhajan Sopori plays the traditional santoor and is considered to be a link not only between individual traditions and regions of his native India, but also between his homeland and the West, especially in connection with music. After a successful show, he returned on May 24 to perform at a concert with his son, Abhay Rustum Sopori (also on santoor), vocalist Ragini Rainu and Bhaumik.

There seem to be some connections between the quick movements of Slovak folk dancing and the often dynamic dancing of India, whether it is more traditional, stemming from religion, myths and folklore, or the more modern “Bollywood” style, marked by few rules and more artistic freedom.

There are several schools of Oriental and ethnic dance in Slovakia that offer Indian dance courses and workshops. The civic association Hafla strives to unite various dance schools and professional dancers to organise comprehensive dance festivals called haflas (parties at which dancers can have fun and dance for themselves rather than for an audience). The spring edition on April 6 was called Holi Hafla, and was dedicated to the traditional Indian festival of lights, Holi, offering, among other things, performances of both classical and modern dance, a workshop by Czech Vendula Uhýrková on a ritual dance about the god Krishna and the goddess Radha.

A three-day workshop of classical Indian dance Bharata-natyam led by Panni Sommi from Budapest is planned for September. In addition to dance techniques, Sommi will explain the dance’s specific hand movements, which tell the stories of ancient Indian mythology, and facial expressions, which help convey the feelings, and the classical Indian style of drama, Abhinaya.

Culture also encompasses cuisine and lifestyle, and in this sense, India has a strong presence in Slovakia: Indian restaurants are popping up throughout Slovakia, and apart from the Ganesh Utsav and Góvinda in Bratislava, one can also find restaurants preparing authentic Indian cuisine in Košice, Spišská Nová Ves and Veľký Krtíš. The Namasté India food shop in Bratislava offers authentic ingredients for those wanting to prepare Indian dishes themselves.

The ancient alternative medicine system Ayurveda has made its way to Slovakia, too: wellness clinics in Bratislava, as well as most Slovak spas, offer various forms of this treatment. There are also online shops selling Ayurvedic products and cosmetics, and a diagnostic centre that uses this approach to help people attain a healthy and balanced life.

Szabolcs Tóth, a Hungarian expert on classical Indian music who introduced the concert by Rajeev Janardan, said that Indian classical music is the oldest unbroken musical tradition in human history. He described it as a complex language which was recorded about 2,000 years ago in books that still exist and are used currently, although the music has changed and continues to evolve, incorporating the emergence of new instruments. Thanks to the rules of its language, musicians of different origins and mother tongues can play together without much rehearsing. Perhaps this approach to music could be more broadly applied to Indian culture, with its ancient traditions combined with modern developments, as well as its attraction for people outside India with completely different traditions.