ONE COULD hardly find a better site to see photographs of old, crumbling Jewish books, survivors of the Holocaust and Jewish monuments that have barely defied the ravages of time, than in a dilapidated synagogue that fell prey to another regime – the communist one – which used the synagogue as a depository. The photo exhibition enlivens the big interior space that in turn lends a unique air to each individual photograph. 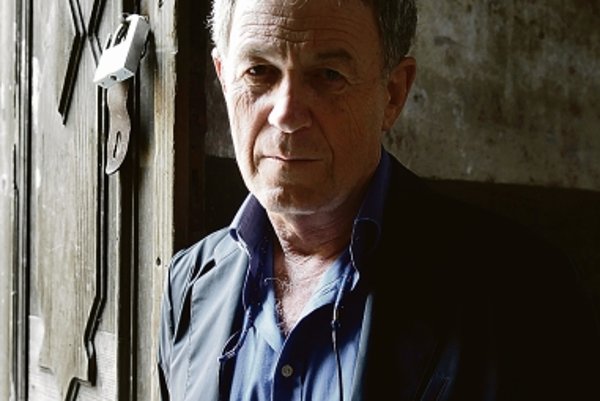 ONE COULD hardly find a better site to see photographs of old, crumbling Jewish books, survivors of the Holocaust and Jewish monuments that have barely defied the ravages of time, than in a dilapidated synagogue that fell prey to another regime – the communist one – which used the synagogue as a depository. The photo exhibition enlivens the big interior space that in turn lends a unique air to each individual photograph.

The new photo exhibition by Yuri Dojc is called Last Folio and is part of a long-term and much larger project. Starting as a series of portraits of Jewish survivors of the Holocaust made in Slovakia in the late 1990s, it developed into a more complex body of work where in parallel with the photographs there is a documentary film. Dojc continued his journey by photographing synagogues and cemeteries as well as abandoned books found in a school from which pupils and teachers had been taken to the Auschwitz concentration camp in 1942. Dojc, a prominent Canadian photographer of Slovak origin, acknowledges that he rediscovered and embraced his own Jewish roots during the process.

Košice, in eastern Slovakia, once had a thriving Jewish community but thousands of residents were deported to death camps during World War II, and after the war the communist regime continued the destruction of the community. Last Folio is on exhibit in the former Orthodox synagogue on Zvonárska Street in Košice and was produced by London-based filmmaker Katya Krausova. The Slovak Spectator spoke with Dojc about the exhibition and his work as a visual artist.

TSS: How did the idea of the Košice exhibition come about?
Yuri Dojc (YD): I had the idea for the project and as soon as I saw the Košice synagogue, I immediately knew how beautiful it would be to show it there. I wasn’t sure how to realise it and when Košice was named the “European Capital of Culture 2013” I thought this would be an absolutely perfect time for our show. So we approached the former mayor of the city and contacted the organising committee and after they had agreed, we started considering how to bring the exhibition there and how to install it.

TSS: What were your expectations for the space and what is the reality?
YD: Our expectations were not too high but once you see the show it is really spectacular. And I don’t think I will ever find a better space for it. The circumstances might be very similar but the atmosphere [in Košice] is unique and fantastic. It is like a homecoming for these pictures … and it actually is their real home. The space is perfect and we pay tribute to the Pentagram design studio from London which designed the installation. Daniel Weil of Pentagram was very attentive and called me even after the exhibition had opened to ask about some technicalities.

TSS: And what was the role of Katya Krausova in the project?
YD: The whole project would not have happened without her. She initiated the filming of the documentary – when I was first doing it I was only working on the portraits – she took the project on the road; she is the producer and she organised the current Košice exhibition.

TSS: Do you think that the public response will be different in eastern Slovakia where the pictures originated?
YD: I never thought about it in this way. But I hope so, because local people have almost forgotten about this horrible time and the experience of their fellow citizens. The sensitivity of people whose parents went through this period is completely different than some young kids. Talking about memories, the exhibition also evokes feelings of how culture and memory work together. And it is important for children to realise what their country and their families went through and to remember those lives. This is the memory of my parents and the continuation of the memory of people who perished.

TSS: An intriguing part is how you found the books shown in the pictures. Can you tell us how it happened? And where is the school where they were found?
YD: The books were in a former Jewish school in Bardejov. While we travelled we encountered different people and most of the portraits are of those survivors who told us their stories – it was during such a visit that we were taken to see the books. This changed the whole direction of the project. I realised that my photographs of the books are actually portraits – portraits of people we couldn’t find anymore. That’s the impression and the impact the books made upon me – I decided to portray each book as a human being and give it as much character as possible – not to photograph the book as a dead item but as a living object, a living person.

There is another aspect to this exhibition that is special today: it is not only a tribute to a whole generation of people who vanished but today, in our time, books too are vanishing as new media are taking over. So the exhibition works on different levels.

TSS: Do you know what happened to the books?
YD: I hope they are still there. Some of them might have turned to dust already but some are still there. Time will take care of the rest of them; they are mostly beyond repair.

TSS: This exhibition is part of a longer project. Is it over now or will it continue?
YD: Every year I say to myself “let’s finish it” and every year I discover another aspect to the project. As much as I would like to say “yes, it’s finished” I cannot tell you because even on this trip [to Slovakia and the Košice opening] I created at least 16 very powerful new photos. Sometimes I can be overcome by this and I need to sit back and let the photos settle in my mind. And only then I can go back – if I need to.

TSS: What are the other already concluded parts of the project?
YD: One is this exhibition in Košice; another part of the project, which I don’t think much more can be done about, are portraits of people of that period – because those who witnessed that era are mostly all gone. But the synagogues are still standing, although some of them just barely, so I might visit more of them and take pictures before returning home to Canada. Looking at the pictures I am asking myself: ‘Are you satisfied? Have you done enough?’

TSS: Do you know what you will do next?
YD: After working on this project, I might now switch to something else.
I am not a historian – I want to be a visual artist who shows memories in his own, unique way. I may come back to culture and memory but for me the aesthetics are crucial and must be well-balanced.