SLOVAKIA is confronted with the arrest of its citizens in Iran for alleged espionage for the second time in less than six months. At the beginning of the year news emerged of the arrest of Slovak national Matej Valuch, who appeared to confess to cooperating with the US intelligence agency in a video posted by Iranian authorities on YouTube. Now reports have surfaced about a group of Slovak tourists arrested for what Iranian authorities called “illegal activities, including taking photos of prohibited places” in the area of the Isfahan province, where many nuclear facilities are located, including a plant used to enrich uranium, the SITA newswire reported. 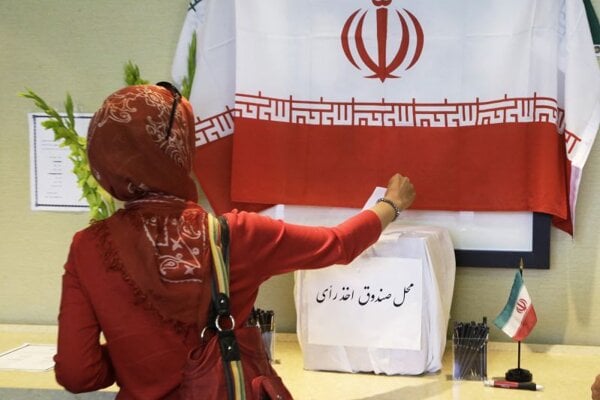 The Slovaks’ arrest by Iranian authorities might have been used as a pre-election campaign to spread fear. (Source: TASR/AP)
Font size:A-|A+0

SLOVAKIA is confronted with the arrest of its citizens in Iran for alleged espionage for the second time in less than six months. At the beginning of the year news emerged of the arrest of Slovak national Matej Valuch, who appeared to confess to cooperating with the US intelligence agency in a video posted by Iranian authorities on YouTube. Now reports have surfaced about a group of Slovak tourists arrested for what Iranian authorities called “illegal activities, including taking photos of prohibited places” in the area of the Isfahan province, where many nuclear facilities are located, including a plant used to enrich uranium, the SITA newswire reported.

Iranian authorities confirmed the detention of eight Slovak paragliders on June 30, saying they were “behaving inappropriately and had unconventional devices with them”, to which the civilians usually do not have access, said Alaeddin Boroujerdi, head of the Iranian parliament’s national security and foreign policy committee, as reported by the TASR newswire. Yet, he did not specify what devices they were alleged to have been carrying.

The Slovak Foreign Affairs Ministry says it has been dealing with the case since May 22, when they first received information about the arrest. Though they refused to specify any details about the negotiations, which are still in progress, they confirmed that the paragliders have met with a Slovak consul in Tehran who confirmed that they are alive.

“No verdict in the whole case has been issued yet, everything is open, so we cannot give you any further details,” head of the press department of the Foreign Affairs Ministry Peter Susko told the Sme daily.

According to the website of the Slovak Foreign Affairs Ministry, tourists are prohibited from taking photos near state buildings and military sites. Visitors should be mindful of using cameras at locations where they are not fully able to distinguish the character of the site. Those who violate this rule could face charges of espionage and imprisonment, Sme reported. The sentence for espionage in Iran is often the death penalty, according to SITA.

Meanwhile, Slovak Foreign Affairs Minister Miroslav Lajčák met with Iranian Ambassador to Austria Hassan Tajik, who is also responsible for Slovakia, whom he asked for permission for the Slovak consul to meet with the detainees again, SITA wrote.

The Slovak Information Service (SIS) intelligence agency confirmed that it has also taken some steps in the case of the detained Slovaks. Yet, it refused to reveal any further details “due to the sensitivity of the situation and possible further developments, with the emphasis on the safety of the detainees”, TASR reported on July 1.

Slovaks might not have known what they were photographing

The detained Slovaks are members of the Paragliding Expedition Slovakia. They have organised several expeditions over the past few years, from which they have made documentary films presented at various festivals, the Hospodárske Noviny daily wrote.

They travelled to Iran as tourists at the beginning of May. The last message they sent was from May 12, in which they spoke fondly of the country as well as the people who, in their words, were very friendly to tourists, Sme reported.

The relatives and friends of the detained Slovaks doubt that they were spying on Iran.

“It has nothing to do with espionage,” one of the friends of the detained Slovaks told Sme, adding that it is just a misunderstanding.

Security analyst Ivo Samson says that it is possible the paragliders did now know they were taking pictures of what might have been a military facility. He told the Pravda daily that the Iranian authorities will release all of them sooner or later.

The Iranian regime uses foreigners to arrest them and accuse them of espionage in order to create for the public the illusion of a threat to the regime, chair of the parliamentary foreign affairs committee and Most-Híd MP František Šebej told public-service broadcaster Slovak Television (STV).

In mid-January the Slovak media reported about the video called ‘Hunter in Trap [sic]’, shot by the Iranian Ministry of Intelligence and posted on YouTube, in which Matej Valuch speaks English, dubbed into Persian, and appears to confess to working clandestinely for the United States’ Central Intelligence Agency (CIA). Valuch was detained in August 2012, he later told the media.

In the nearly 20-minute video Valuch talks about how he came to the country to work and how he was contacted by a CIA agent, to whom he was sending personal information about Iranians. At the end of the video he reveals the identity of six other agents alleged to have been organising “continuous and clever operations” focused on Iranians, SITA wrote back in January.

Valuch returned to Slovakia in the beginning of February. He told journalists that he could not explain why he was accused of being a spy. When talking about his arrest, Valuch said the investigators informed him that the people who hired him were with the CIA, so he was not detained as a CIA agent, adding that he does not know, and therefore cannot confirm, the real identities of the people he was cooperating with, TASR wrote in February.

Regarding the origin of the video, Valuch said that the Iranians made a short film in September 2012, a few weeks after his arrest, in which he talked about his work in the area of HR and his business projects. They told him they would show the video to someone in a position of high authority who would assist in releasing him. Yet, the authors of the video used only three minutes of the original version, he said, adding that the Iranians made similar videos with 20 other prisoners, SITA wrote.