AN INVESTIGATOR for the National Criminal Agency phoned investigative journalist Tom Nicholson on July 4, requesting that he go to the police for questioning over what Nicholson described for the Sme.sk news website as an issue of “revealing state secrets” in association with his blogs. 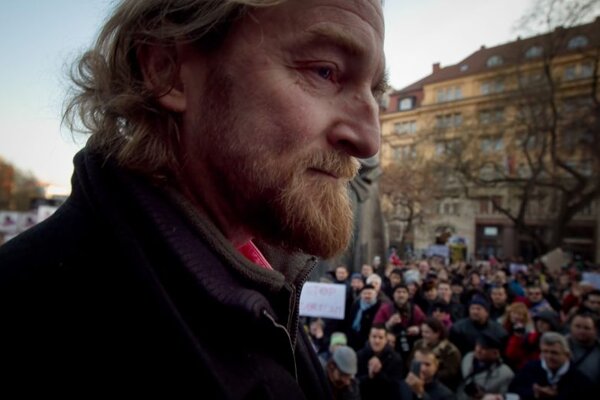 AN INVESTIGATOR for the National Criminal Agency phoned investigative journalist Tom Nicholson on July 4, requesting that he go to the police for questioning over what Nicholson described for the Sme.sk news website as an issue of “revealing state secrets” in association with his blogs.

“I do not know whether they think I really belong in prison, but it motivates me to write even more,” Nicholson told a Sme daily reporter on July 4. “Obviously they have a different understanding of freedom of speech, for which it is necessary to fight.”

Recently, Nicholson published a blog on which he reported on specific cases of suspicions of embezzlement of state funds via the military intelligence based on classified information which several media have received. Nicholson published a photo of a building, an alleged subject of the embezzlement, leaving it up to the readers to judge whether the building could be worth what the military intelligence sold it for when it was trying to get rid of it, Sme reported.

The prosecution has not answered Sme’s questions about why Nicholson is being investigated, with spokesperson of the Office of Special Prosecution Andrea Predajňová suggesting that the “issue of military intelligence is under investigation and thus we will not comment on it in detail”.

Opposition politicians however see the police’s questioning of Nicholson as part of an effort to intimidate journalists.

“The goal is obviously not to investigate but intimidate,” said deputy with the Slovak Democratic and Christian Union (SDKÚ) Miroslav Beblavý, as quoted by Sme.

A reporter with the Hospodárske Noviny daily, Martina Ruttkayová Tvardzíková, said on June 26 that she would file a complaint against the police over what she called an intimidating interrogation that occurred after she submitted to the police confidential documents that she had received pertaining to the one-time Military Intelligence Service (VSS).

“She can submit a complaint and it would be checked,” responded Interior Minister Robert Kaliňák to Tvardzíková’s earlier statement, the SITA newswire wrote on June 26.

The Special Prosecutor’s Office has already stated that after looking into the procedures of the police investigators it did not find any violation of the rules for interrogation of a witness.

However, Tvardzíková, who covers military intelligence issues for her daily, said that instead of just the formal act of submitting the documentation she had, which should have lasted a few minutes, the police began to pressure her into disclosing her sources. Sme reported on June 26 that the police also collected DNA and fingerprints from Tvardzíková to compare these to the envelope she submitted.

“They want to intimidate everyone who knows something,” Tvardzíková told Sme, suggesting that Police President Tibor Gašpar also recommended that she not be involved with the case any further.

Gašpar, however, said that he had told Tvardzíková that when she is involved in a case as a witness it would be more appropriate if her newspaper assigned another reporter to cover the story. Regarding the suspicions of embezzlement, Gašpar said that the police would provide information to her in the same way as to other journalists, Sme wrote.

The Slovak Syndicate of Journalists (SSN) expressed concern over Tvardzíková’s claim that police investigators had exerted unjustifiable pressure on a journalist and had used psychological pressure as a form of intimidation, SITA reported. In its statement the SSN said that the status of journalists and protection of their information sources is inextricably linked in a democratic society with keeping the public informed and that “unacceptable pressure by state bodies or the police is an intervention against the essence of a democratic system”.