€300 million to help Roma in Slovakia

THE EUROPEAN Union has increased funding to help ease the dire situation of Roma communities in Slovakia. In the upcoming budgetary period the sum will be 50 percent higher than what was allocated for the current term. Observers however question how helpful the money will be, voicing concerns that a lot of it might end up in the pockets of speculators and fraudsters rather than on actual aid. 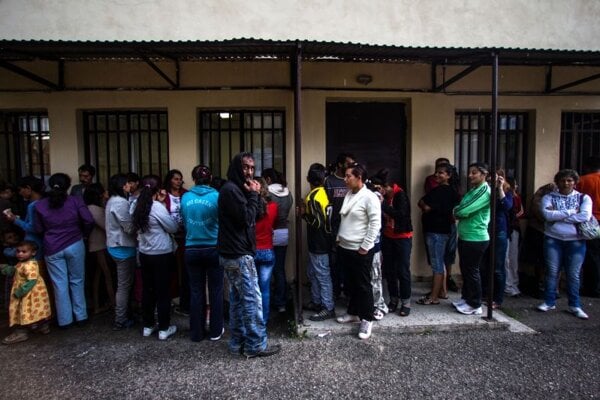 THE EUROPEAN Union has increased funding to help ease the dire situation of Roma communities in Slovakia. In the upcoming budgetary period the sum will be 50 percent higher than what was allocated for the current term. Observers however question how helpful the money will be, voicing concerns that a lot of it might end up in the pockets of speculators and fraudsters rather than on actual aid.

“We count on getting at least €300 million for the solutions of Roma issues,” government proxy for Roma communities Peter Pollák said, as quoted by the Sme daily.

Slovakia will be allowed to draw €300 million for projects aimed at solving the problems of the Roma, out of a total of €19.2 billion that the country is expected to be able to draw from EU funds in the next budgetary period, 2014-2020.

The fate of EU money questioned

The amount of the aid that actually went towards solving Roma issues in the past programming period since 2007, however, remains unclear.

While politicians say they have already spent about €200 million, expert on Roma issues Daniel Škobla from the UNESCO development programme said that he considers this to be nonsense.

“The legend of €200 million was created in 2006 when the so-called complex attitude programme was prepared,” Škobla told Sme, explaining that it should have focused on allocating certain sums for projects for Roma. Yet, it has never been realised, but it “gradually started to live its own life”.

According to Škobla, the projects aimed at training appear to be inefficient, as their graduates have qualifications but no jobs. Some projects were misused by speculators and had nothing to do with the Roma.

Labour Ministry spokesperson Michal Stuška confirmed for Sme that the ministry has registered several lawsuits and criminal motions in connection with these projects.

Former governmental plenipotentiary for Roma communities, Anina Botošová, said that the numbers that are available are “strongly overvalued”, Sme wrote.

EU funds did not help in the past

The Labour Ministry has recorded several criminal complaints and lawsuits that have been filed in connection with murky practices with Roma projects, Sme reported.

Pollák too admitted that there have been no tangible results so far, and he promises to be stricter with projects that are to be funded in the future: not only stricter control of the actual projects that receive the money, but also limits on the kind of projects that will be eligible for funding.

It is believed that most of the money from EU funds – around €250 million – will go into infrastructure: houses, community centres, primary schools and kindergartens. The rest of the money should go towards the salaries of field assistants, teacher assistants and health-care assistants, according to Sme.

At the same time, however, Pollák admits that €300 million is far from enough to solve all the problems.

“To improve the situation in the settlements we would need €700-800 million,” he told Sme.

Meanwhile, on June 26, the European Commission called on EU member states to deliver on their commitments to ensure equality and to do more to improve the economic and social integration of Roma living in Europe.

The EC Roma progress report, among other things, found that a majority of member states have not allocated sufficient resources from their national budgets to implement the strategies.

The EC recommendation following the report suggests that member states allocate sufficient funding to their national and local strategies and action plans for Roma inclusion from any available sources.