DUE to lower income taxes paid by corporations and individuals as well as lower domestic consumption and, thus, lower collection of VAT, the Finance Ministry has reduced the tax revenue forecast for 2013. The change in the expected tax and levy revenues comes on the heels of a downward revision of the estimated economic growth for this year. The Finance Ministry forecasts that tax revenues will be almost €350 million lower in 2013 than originally expected. 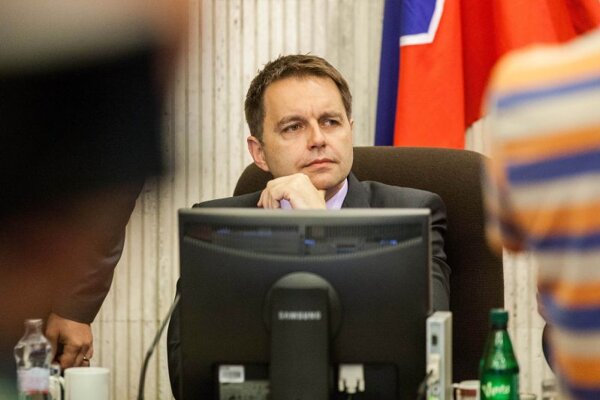 DUE to lower income taxes paid by corporations and individuals as well as lower domestic consumption and, thus, lower collection of VAT, the Finance Ministry has reduced the tax revenue forecast for 2013. The change in the expected tax and levy revenues comes on the heels of a downward revision of the estimated economic growth for this year. The Finance Ministry forecasts that tax revenues will be almost €350 million lower in 2013 than originally expected.

“These figures confirm just one fact – that the year of 2013 is the second worst of [Slovakia’s] economy [after 2009],” Finance Minister Peter Kažimír said when commenting on the updated figures revealed on June 27.

Compared with the February prognosis of the Finance Ministry’s Financial Policy Institute (IFP), revenues from taxes and levies should by €347 million (0.5 percent GDP) lower, amounting to €19.380 billion in 2013. In 2014 they are projected to be €19.472 billion, a decline of €611 million (0.8 percent of GDP). In 2013 the IFP expects that revenues from corporate tax will be €146 million less, while revenues from income tax of private individuals will be €32 million less than what was expected in February. The shortfall in collected VAT is estimated at €42 million and the gap in excise taxes is estimated at €65 million.

“The worsening of the macro-economic development had the most important influence over the reduction of [forecast] revenues,” Marek Porubský from the IFP wrote in the commentary to the new prognosis. “Another reason of the revision is new information about income taxes of legal entities in 2012 and weaker fulfilment of [plans in collection of] excise taxes on mineral oils and tobacco products [in 2013].”

Martin Filko, the head of the IFP, specified for the Hospodárske Noviny daily that the unexpected lower collection of corporate taxes contributed to the €347 million shortfall, which was €70 million less than planned. The IFP received this information only recently based on completed tax returns for 2012.

“Income tax of corporations fell significantly due to the crisis in 2009, and since this time it has been stagnating in spite of the growth of economic results of companies,” Filko said as cited by the daily.

As of the beginning of 2013 the corporate tax in Slovakia increased from 19 percent to 23 percent. This increase will bring an additional €223 million to state coffers this year, according to Kažimír. He estimated that if Slovakia had not increased the tax rate, state budget incomes would have been almost €250 million lower, the TASR newswire wrote.

Squeezing the public-finance deficit under 3 percent of GDP this year is still feasible, but further consolidation measures will be necessary, asserted Kažimír. He excluded the possibility of an additional tax increase for now. His colleagues from other ministries will thus have to revise their drawing of expenditures.

Radovan Ďurana, from the economic think-tank INESS, sees room for reduction in expenditures.

“Expenditures of the government amount to €27 billion,” Ďurana told Hospodárske Noviny. “One billion [euros] accounts for 3.4 percent. Certainly there is space for cuts.”

Peter Goliaš, the head of the economic think-tank INEKO, believes that the government can save millions of euros on state procurements and social benefits, while it should not slow down consolidation of public finances.

He added that fighting tax evasion will be of key importance for filling state coffers.

“We will continue to be tougher on tax evasion; we will be tougher also because we see that it makes sense,” said Kažimír.

The opposition ascribes the decline in tax collection to the governing Smer party. In response to the revised tax forecast, experts from the People’s Platform (the Christian Democratic Movement [KDH], the Slovak Democratic and Christian Union [SDKÚ], and Most-Híd) said that Smer has throttled the Slovak economy and tax collection with its measures, according to TASR.

The shortfalls unveiled in the June revision are the best evidence that the policies of Robert Fico’s government, which is “throwing consolidation onto the people, increasing taxes and deductions, and making the environment for creating new jobs worse”, are not working, said SDKÚ vice-chairman Ivan Štefanec.

Ivan Švejna, Most-Híd vice-chairman, added that it is about time that the Labour Code was made more flexible and the administrative burden and taxes were reduced.

The change in the expected tax and levy revenues comes on the heels of a downward revision of the estimated economic growth this year in the first half of June. The National Bank of Slovakia (NBS) decreased its forecast by 0.1 percent to 0.6 percent, while the Finance Ministry was even less optimistic, slashing its previous forecast from 1.2 percent to 0.5 percent.

Both the NBS and the Finance Ministry see ongoing recession in Slovakia’s most important trading partners and weak domestic demand as being behind the country’s slower than expected economic growth.

In 2012 Slovakia’s economy grew by 2 percent, but posted 0.6-percent growth year-on-year in the first quarter of 2013, down slightly from the 0.7-percent rate recorded in the last quarter of 2012.