YOUNG Slovaks are often trapped in a vicious circle. After graduating from school many are unable to find work since they do not receive enough practical training during their studies to meet companies’ specific qualifications. As a result, the rate of unemployment among youth is high at both the national and European level. 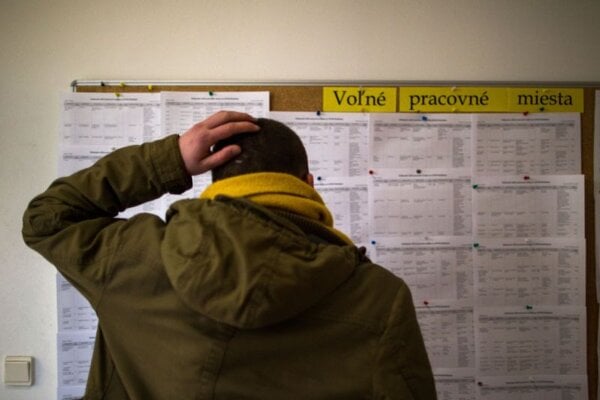 YOUNG Slovaks are often trapped in a vicious circle. After graduating from school many are unable to find work since they do not receive enough practical training during their studies to meet companies’ specific qualifications. As a result, the rate of unemployment among youth is high at both the national and European level.

The jobless rate in Slovakia stood at 14.26 percent in May, which means that there were 384,977 ready to immediately take he job. Out of this number, 75,230 were under the age of 25, according to the data provided by the Slovak Central Office for Labour, Social Affairs and Family. Slovakia has the sixth highest youth unemployment rate in the European Union, with youth joblessness affecting nearly 34 percent of the total number of the country’s young people.

To tackle the problem, the EU recently allocated €6 billion, at the summit in Brussels on June 27 and 28, to be used over the next two years, with an additional €2 billion to be used if necessary.

Slovakia’s Prime Minister Robert Fico considers the summit a success for Slovakia since the country might be able to use altogether €250-270 million from structural funds to boost employment among young people as part of the agreement for the 2014-20 EU budgetary period.

“It is now only up to us how we speed up the preparation of agreements with European institutions,” Fico said, as quoted by the TASR newswire.

Slovakia has already used €70 million to fund projects focused on youth employment, which was reallocated from other operational programmes. The rest of the money might also be transferred from other operational programmes, like eGovernment (a project to create a centralised state-wide database) and education. This move will be made possible due to an agreement reached by Slovakia in Brussels, which extends the deadline for spending the remaining money for the 2007-13 budget period until the end of 2014, TASR wrote. Slovakia could have lost up to €350 million had it not been able to postpone the deadline, according to the SITA newswire.

The country will receive the additional €80-100 million as part of a new European Commission initiative called Youth Guarantee to help countries with more than 25-percent youth unemployment, TASR reported. This money should be used especially to create jobs in small and medium-sized enterprises.

Future projects for the young jobless

Just prior to the summit, the EC issued a document entitled Working Together for Europe’s Young People – A call to action on youth unemployment, in which it proposes several measures to help counter youth unemployment in a way that has “the potential for immediate impact”. Some of the measures will be included in projects financed from money allocated for the new EU budget, the EC informed in a press release on June 19.

The EC stressed the need to speed up implementation of the Youth Guarantee, according to which EU member states should ensure that all young people up to age 25 receive a quality offer of employment, continued education and an apprenticeship or traineeship within four months of leaving formal education or becoming unemployed, the EC informed.

Fico welcomed the initiative, saying, “we have to make every effort to allow young people to access jobs, education or re-qualification courses within four months [after graduating from school]”, as reported by TASR.

Michal Páleník from the Employment Institute said that the measures proposed by the EC are only instructions, which are far from being the final implementation. Though it is important to connect education with the labour market and to help young people, it is more difficult to say how to do it, he told The Slovak Spectator.

Slovakia now has time until October 2013 to prepare the plan for realisation of the Youth Guarantee, which is to include specific steps, tasks for public bodies and other organisations, a plan for financing the system, methods for monitoring the realisation and a time frame, spokesperson for the Labour Ministry Michal Stuška told The Slovak Spectator.

Though the ministry is not able to offer specifics on how it will help unemployed youths, it is possible that it will continue the projects that are already running, such as the national project launched in November 2012 that focuses on employment of young people by small and medium-sized companies, Stuška added, as reported by the Hospodárske Noviny daily.

The EC also proposed several recommendations, which every country should implement in order to help firms recruit young people. Slovakia should step up efforts to address high youth unemployment, for example, by implementing the Youth Guarantee, and by taking steps to encourage young people to study the teaching professions. Moreover, in the field of vocational education and training the country should reinforce the provisions of work-based learning in companies. When it comes to higher education, Slovakia should create more job-oriented bachelor programmes, the EC proposed.

In this regard, the Labour Ministry will cooperate with the Education Ministry, Stuška said.

The Education Ministry has welcomed the initiative of the EC since the projects financed from the structural funds contribute to improving the situation in educating students at secondary schools and universities, ministry spokesperson Michal Kaliňák told The Slovak Spectator.

Regarding already realised projects, Kaliňák pointed to the national Development of Secondary Professional Education, which seeks to improve vocational education in specific programmes based on the requirements of employers in cooperation with professional associations; and the national project Universities as Engines of Development of Epistemic Society, whose aim is to adjust tertiary education to the needs of the epistemic society through, among other things, fostering cooperation between schools and the private sector, and to improve the quality of the study programmes. Moreover, there is also a project by Iuventa - the Slovak Institute for Youth, called KomPrax – Competences for Practice, which offers young people to gain information, skills and attitudes that support better employment of young people, Kaliňák said.