“Immortal” donors to be recognised in Behrens’ New Synagogue in Žilina

THE NEW Synagogue in Žilina, which is currently being reconstructed into a culture centre, is entering a new phase of its fundraising campaign, known as “Buy Yourselves Immortality”. 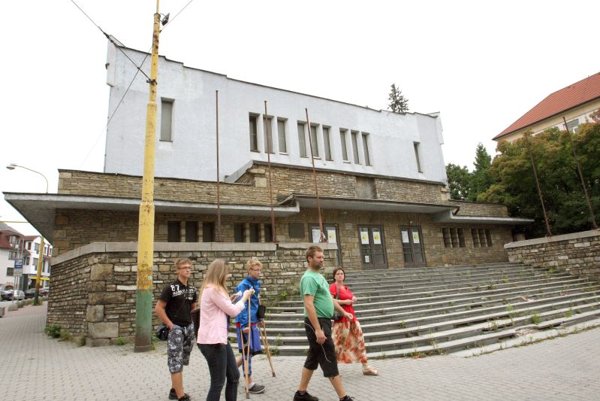 THE NEW Synagogue in Žilina, which is currently being reconstructed into a culture centre, is entering a new phase of its fundraising campaign, known as “Buy Yourselves Immortality”.

Reconstruction work started in 2012, with a campaign to collect funds for the €1 million project starting in October 2012. The Truc Sphérique civic association, which is heading the project, hopes that the synagogue will start to fully serve its new purpose in 2014.
As of the end of June 2013, 1,100 donors gave more than €40,000 to the synagogue. To express thanks to all the contributors, a special artwork will be created which will record the donors’ names for posterity. At a press conference on June 26, the project’s architect, Milan Jančok, and curator Fedor Blaščák, published the plan for the artwork by Ilona Németh: time capsules will bear the name of each donor (and potentially also a message from him or her) and will be personally placed by the donor into the floor in the front of the synagogue.
“In the project, we formally used the details in the floor of the Behrens’ synagogue, the decorative mosaic line, which creates a so-called carpet ornament on the cast terrazzo floor,” artist Ilona Németh said when explaining her design. “The lids of the capsules form a continuation of this mosaic into the public space surrounding the building, and under each lid the name of the donor will be written. This is also how I perceive the horizontal, democratic and de-centralised structure of the initiative around the Truc Sphérique association, which strives to bring new content to this unique monument.”
“For now, we are working with the more than 1,000 names that we already have, but the number of capsules can [keep growing] until the reconstruction is finished by 2014 or 2015,” Blaščák added. A web application with an interactive map of the capsules will accompany the project, and it will be installed in the foyer of the prospective culture centre.
Ilona Németh is a Slovak visual artist, exhibiting in several countries worldwide, known also for her civic engagement, which led to her participation in the Žilina project.
The New Synangogue was built between 1928 and 1931 and it served its original purpose for just a few years until the Second World War. After the war the building was used first as a theatre and concert hall, then as the auditorium of Žilina University and later as a cinema. When the synagogue was adapted for use as an auditorium and a cinema, the whole interior was significantly altered, and pasteboard was installed on the walls, covering the original design, including the inside of the 17.5-metre high cupola. When it ceased to serve as a cinema back in 2010, the local Jewish community, which owns it, offered to rent it for the symbolic sum of €1 without placing any restrictions on its future use.

Marek Adamov of the non-governmental organisation Truc Sphérique opted to rent the building. Adamov turned to Jančok, with whom he had worked in the past. The result is a reconstruction project of an exceptional building, turning the former synagogue into a kunsthalle-style cultural centre, for which they have already won the Bauwelt Advancement Award 2013 in Germany.