A lively start to the Pohoda festival

THE PERFORMANCES by British indie rockers Kaiser Chiefs and American alternative rock band Smashing Pumpkins on July 11 at the 17th Bažant Pohoda music festival confirmed the words of Pohoda CEO Michal Kaščák that Thursday, the first day of the festival, is not “just a warm-up day” anymore. 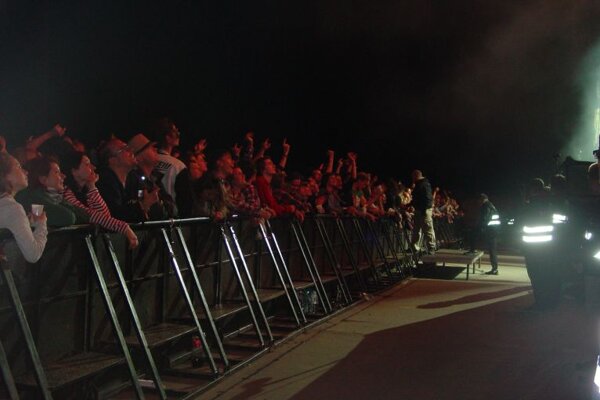 THE PERFORMANCES by British indie rockers Kaiser Chiefs and American alternative rock band Smashing Pumpkins on July 11 at the 17th Bažant Pohoda music festival confirmed the words of Pohoda CEO Michal Kaščák that Thursday, the first day of the festival, is not “just a warm-up day” anymore.

Despite overcast skies, the opening programme, including 12 musical performances in addition to theatrical productions, a literature club and film screenings, attracted around 20,000 people on the first day of festival, said Mário Gešvantner, the Pohoda spokesperson. Pohoda occurs annually at Trenčín airport, with this year’s festival scheduled for July 11-14, with ticket prices ranging from €49 to €99. Most visitors typically arrive at Pohoda on Friday, however, this year saw an increase in the number of people who came the first day, a fact confirmed by traffic jams in Trenčín, the Sme daily reported.

Thursdays are now a regular day of the festival, Kaščák said to the press in May. “Two big names will perform - Smashing Pumpkins and Kaiser Chiefs - and we will even open the dance tent on Thursday, where Major Lazer and DJ Diplo [an electronic dancehall project by DJ/producer Diplo] will perform, and you will even see Slovak dancing by Peter Breiner. We are especially happy that the Hungarian orchestra will perform a symphonic project for this Slovak [Breiner] living in America.”

Approximately 30,000 people visited last year’s festival, with the CNN news website ranking Pohoda among the 50 top festivals worldwide, according to the festival’s website.

Other highly anticipated musical highlights include the Atoms for Peace project featuring singer Thom Yorke of the British rock band Radiohead, as well as Australian alternative rock legends Nick Cave and the Bad Seeds, in addition to nearly 100 other artists, according to the festival’s website.

Pohoda also features a series of discussions on various issues that resonate in Slovak society, Gešvantner told The Slovak Spectator. At the last minute, organisers added to the programme a discussion on the June 19 police raid that took place in Moldava nad Bodvou, in which 63 police officers rode into the Budulovská Roma settlement and raided the dwellings of the local inhabitants.

“People who are interested in discussions can find [at Pohoda] issues worthy of discussion and they can choose whether it will be political, economic or social issues,” Gešvantner said. “Politics is present at Pohoda, the same as it is present in real life.”