WITH STUBBORN youth unemployment remaining at among the highest rates in Europe, a European Union-backed Labour Ministry effort is in the midst of attempting to turn the tide. 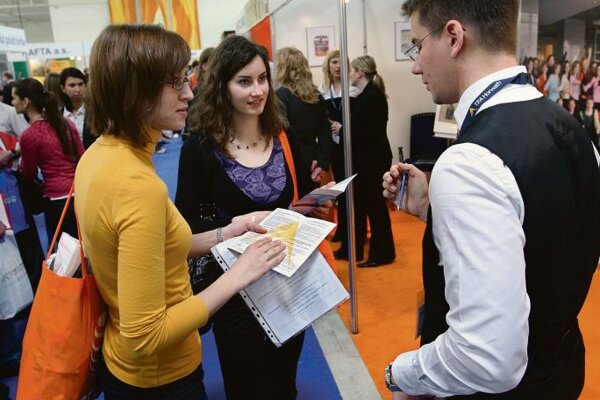 WITH STUBBORN youth unemployment remaining at among the highest rates in Europe, a European Union-backed Labour Ministry effort is in the midst of attempting to turn the tide.

About 34 percent of Slovakia’s young people are unemployed, the sixth highest rate in the 28-member EU. Labour offices reported 75,230 people under the age of 25 registered at the end of May, according to the Slovak Central Office of Labour, Social Affairs and Family (ÚPSVaR). The Labour Ministry has already presented a plan intended to curb unemployment by creating a total of 14,460 new jobs via EU-funded projects designed to boost employment of those under 29 and over 50 years of age.

Based on an agreement between Slovakia and the European Commission, the government should spend €70 million on two national projects: one created for the private sector, focusing on job-creation in the transport sector and at small and medium-sized enterprises, and the other for community-based jobs in municipalities. Funding runs from November 2012 to September 2015. Critics of the project contend spending public funds leads to the creation of artificial, unsustainable jobs.

By the end of June the ministry already used about €45 million of the package to create the new jobs, with the majority of the money going to small companies in eastern Slovakia, the Sme daily reported July 10.

“We registered 9,513 requests by June 15,” said Marián Valentovič, head of the ÚPSVaR, as quoted by the SITA newswire, when presenting the preliminary information about the realisation of the national project focusing on employment in enterprises. He added that originally they expected to create and support only about 8,960 jobs within this project.

Of these, almost 8,500 jobs have already been established, Sme wrote.

Most money allocated within this project went to small companies employing less than 10 people, which created together 5,320 new jobs, while small enterprises employing no more than 50 people established 1,576 new work positions. Most of the funds went to firms located in Bardejov, Prešov and Spišská Nová Ves districts, according to Sme.

Private employers could receive a contribution between €434 and €522 per month per person. All participants receive contributions for between six and 18 months, but have to maintain the job in question for a further six to 21 months, depending on the sphere of business.

In addition to money from the Labour Ministry, the Economy Ministry has another €125 million to fund 2,000-3,000 jobs for young people. It remains unclear how much of this has already been used to create jobs and how many have been created, Sme wrote.

Representatives of the opposition and analysts have criticised the projects as useless spending of EU money.

Chair of the Christian Democratic Movement Ján Figeľ says the government plan to tackle youth joblessness makes things worse by giving jobs to thousands of young people with artificial measures.
“When the stimuli or the subsidies guaranteed by the European funds are over, also the employment for several thousands of young people will end,” Figeľ told the press on July 1, as quoted by the TASR newswire.

He also said that the high number of young people without a job is affected by labour market reforms, plus high taxes and payroll taxes.

“Slovakia does not need meaningless EU projects worth tens of millions of euros to support employment,” Ján Dinga, an analyst with INESS think tank told Sme, adding that youth joblessness grows mostly through administrative costs which increase the price of labour.

Dinga told Sme that if the state used the €37 million package to cover the losses caused by the abolishment of payroll taxes paid by the employers for people with minimum wage, it would create about 13,000 new jobs.

Youth unemployment is also an issue at the European level. The EU recently allocated €6 billion to target the problem over the next two years, with an additional €2 billion in reserve, to be used as necessary. Part of the money should be used within a new European Commission initiative called Youth Guarantee, according to which EU member states with more than 25-percent youth joblessness should ensure that all young people up to age 25 receive a quality offer of employment, continued education and an apprenticeship or traineeship within four months of leaving formal education or becoming unemployed.

Slovakia will also be able to use some €250-270 million from structural funds to boost employment among young people as part of the agreement for the 2014-20 EU budgetary period, including an already used €70 million. Moreover, the country will receive the additional €80-100 million as part of the Youth Guarantee, as reported by TASR. The rest of the money might also be transferred from other operational programmes, like eGovernment (a project to create a centralised state-wide database) and education, as a result of an agreement which extends the deadline for spending the remaining money for the 2007-13 budget period until the end of 2014.

The EC has also made faster implementation of the Youth Guarantee initiative a priority and has made recommendations on what members can do to encourage firms to recruit young people.

The EC advised Slovakia to step up efforts to address high youth unemployment, for example, by implementing the Youth Guarantee, and taking steps to encourage young people to study the teaching professions. Moreover, in the field of vocational education and training the country should reinforce work-based learning in companies. When it comes to higher education, Slovakia should create more job-oriented bachelor programmes.

Slovakia has until October 2013 to prepare the plan for implementation of the Youth Guarantee, which is to include specific steps, tasks for public bodies and other organisations, a plan for financing the system, methods for monitoring the implementation and a time frame, Labour Ministry spokesman Michal Stuška told The Slovak Spectator.

In implementing these recommendations the Labour Ministry will cooperate with the Education Ministry, he said.

Yet, Michal Páleník from the Employment Institute, said that the measures proposed by the EC are only instructions, which are far from being the final plan. Though it is important to connect education with the labour market and to help young people, it is more difficult to say how to do it, he told The Slovak Spectator.