IF SLOVAK skiers put Lithuania on their map, they might be able to keep their skiing gear on even in the summer, so suggests Edvilas Raudonikis, the Chargé d’Affaires of the Republic of Lithuania to Slovakia based in Vienna. According to Raudonikis, due to the lack of direct flights between Slovakia and Lithuania, there has so far not been sufficient cultural exchange between the countries, although he sees a positive trend. The Slovak Spectator spoke to Raudonikis about Lithuania’s experiences with EU membership, its challenges as well as business ties between the countries. 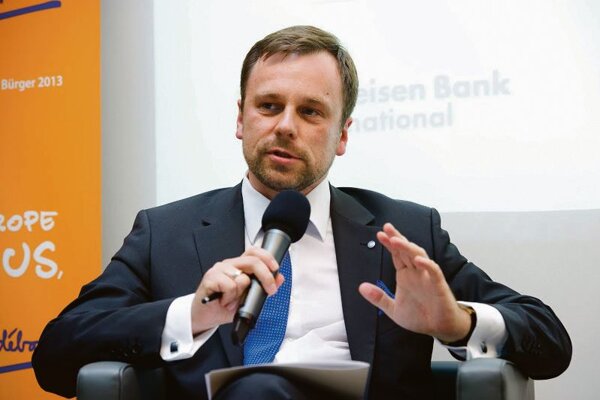 IF SLOVAK skiers put Lithuania on their map, they might be able to keep their skiing gear on even in the summer, so suggests Edvilas Raudonikis, the Chargé d’Affaires of the Republic of Lithuania to Slovakia based in Vienna. According to Raudonikis, due to the lack of direct flights between Slovakia and Lithuania, there has so far not been sufficient cultural exchange between the countries, although he sees a positive trend. The Slovak Spectator spoke to Raudonikis about Lithuania’s experiences with EU membership, its challenges as well as business ties between the countries.

The Slovak Spectator (TSS): What are the benefits and challenges that EU membership has brought to your country? How would you assess the public’s attitude towards EU membership today?
Edvilas Raudonikis (ER): Next year Lithuania will celebrate together with ten eastern and central European countries the 10th anniversary of being a member of the European Union. The impact of the EU is visible in nearly every city, town and village of Lithuania. New roads and culture centres have been built and new business opportunities have been created using European structural funds. However, this is not the main benefit Lithuania gained from the membership. The most important outcome of the membership was that Lithuanian businesses, scientists and artists became an integral part of the most developed and advanced region of the world. According to a recent Eurobarometer survey, the majority of Lithuanian citizens see the EU as an area of free movement, open labour markets and greater education possibilities. Two thirds of Lithuanians do not think that Lithuania would do better without the membership in the EU. As for challenges, Lithuania struggles together with other member states with youth unemployment and emigration. Nonetheless, it is important to point out that a major part of the Lithuanian population believes that “more Europe” could be the way to tackle these challenges.

TSS: How do you think the adoption of the euro will benefit your country? What are the most frequently voiced concerns?
ER: The Lithuanian national currency, the litas, has been pegged to the euro since 2002, which means that Lithuania is already implementing the monetary policy of the European Central Bank. Introducing the euro as a national currency would benefit the economy because Lithuania mainly trades with the eurozone countries. The euro would also boost exports and make Lithuania more attractive to foreign investors, as well as reduce transaction costs for companies. The biggest fear among the Lithuanian population is that prices might rise after introducing the euro.

TSS: Could you assess the current state of economic cooperation and trade between your country and Slovakia?
ER: Trade between Lithuania and Slovakia in 2012 was €179.3 million. For comparison, with our closest neighbour Latvia it was €4.03 billion. Trade with Slovakia in 2012 compared with 2011 increased by 22.2 percent. Slovakia currently is number 29 on the list of Lithuanian export partners and number 23 on the list of Lithuanian import partners.

TSS: How do you perceive Slovakia as a destination of investments from your country? Is there any unexplored potential and if yes, what areas of Slovakia’s economy are interesting for investors from your country?
ER: Slovakia has succeeded in attracting a significant amount of FDI. It shows that your country is interesting for foreign investors, that the tax system is attractive for doing business in Slovakia. Lithuanian investments in Slovakia amount to €8.8 million, or 2 percent of total Lithuanian FDI in the EU member states. I am sure that there is much more potential. We have to take advantage of the common market and encourage our businesses to be more proactive also outside their traditional markets.

TSS: There are several examples of regional cooperation, such as links between Benelux countries or the Visegrad Group. On what levels do Baltic countries cooperate? What are the benefits of this cooperation for your country?
ER: The Nordic Baltic Eight (NB8) is another fine example of pragmatic and working regional cooperation. Finland, Sweden, Denmark, Norway, Iceland, Lithuania, Latvia and Estonia have been regularly cooperating and coordinating their positions in various areas and different political levels since 1992. Prime ministers of six EU NB8 countries (Denmark, Sweden, Finland, Estonia, Latvia and Lithuania) regularly convene for informal meetings over EU matters on the eve of every European Council meeting, and the foreign ministers of these six countries meet on the eve of every General Affairs Council and Foreign Affairs Council.

Cooperation between Baltic States is also well developed and now regular meetings of the Baltic Assembly, a shared structure of three parliaments, Baltic Council of Ministers and Presidents provide political and practical background for common projects for example Rail Baltica and Via Baltica, mutual investments and trade and allow coordinating positions in the EU. The benefits of the cooperation and useful spill-over effects are particularly evident in the economy. Nordic countries have, meanwhile, become the major foreign investors in Baltic countries, especially in banking, telecommunication and service sectors.

TSS: Do you feel that Lithuanians and Slovaks know enough about each other? What aspects of the culture of your country could be, in your opinion, appealing to Slovaks? Is there any cultural exchange between Slovakia and Lithuania?
ER: Lithuania has a lot to offer: great tourism infrastructure and destinations, like the Baltic seaside and wonderful nature. As for cultural links between our countries, other than the football qualification for the World football championship in Brazil, there has been very little cultural exchange. This can mostly be explained by lack of accessibility between our two countries, as there are no direct plane flights from Slovakia to Lithuania and vice versa. There are attempts, however, to engage in a mutual cultural dialogue. One of the examples could be a website, a project financed by the European Union Lifelong Learning Programme in cooperation with several EU countries’ cultural centres, like the Vilnius University in Lithuania, aimed at teaching the Slovak language (www.slovake.eu). So the tendency is positive, but there is a lot of room for improvement.

TSS: Have Slovaks in your opinion discovered the Baltic countries, specifically Lithuania, as a tourist destination? What could inspire more interest in your opinion?
ER: The tourist inflow from Slovakia is very minor: in 2012 in hotels there were only 2,254 stays of tourists from Slovakia, which is 4 percent of total accommodations from European countries. Lithuania is famous for its historical places, beautiful nature and many opportunities for enjoying water tourism (like kayaking, paddle-boating etc.). The biggest indoor skiing arena in central and eastern Europe was recently established in Druskininkai (one of the most attractive centres in the region for spa treatments). A visit there could be a great chance for Slovak skiing fans to keep their skis and snowboards on even in summer.