CHRISTIAN Fotsch leaves nothing to chance when cooking fondue, the traditional Swiss dish first described in a booklet published in Zurich in 1699. Three types of grated Swiss cheese are prepared in bowls marked with stylish paper nametags, such as Appenzeller, Gruyére and Emmentaler, and are ready to be poured into a “caquelon”, a special pot for making fondue, along with dry white wine and Kirschwasser, the traditional Swiss cherry liquor.

Related: Swiss cuisine I Appetizer I Other cuisines 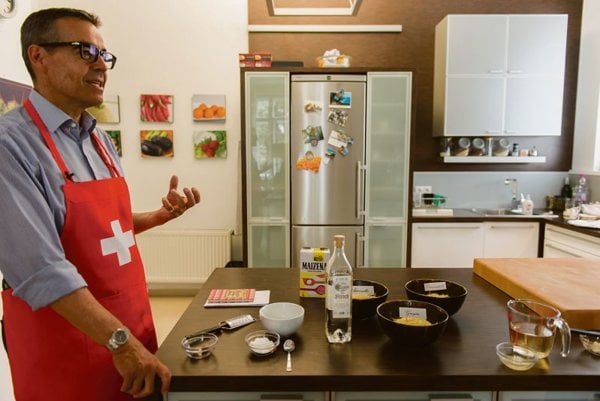 Christian Fotsch: It is necessary to use dry white wine to prepare foundue; otherwise the mixture will not melt together. (Source: Jana Liptáková)
Font size:A-|A+  Comments disabled

“Fondue in a way reflects the spirit of Switzerland through its main ingredients,” said Fotsch, the Swiss ambassador to Slovakia, explaining that cheese is a very traditional product of Switzerland, which has a large dairy industry, as well as wine, which is widely produced in his homeland.
However, a good fondue experience needs something more than cheese and wine.

“The feeling of togetherness is very important for this dish,” said Fotsch, while explaining to his guests during the Cooking with Ambassadors programme at his Bratislava residence how to use the special long-stemmed fork for dipping pieces of bread into the heated fondue pot at the centre of the table.

Since fondue is a rich dish, people would traditionally serve it in the evening in wintertime, when there is a lack of sunshine and when “they might need something to tighten them up”, Fotsch said.

The Swiss ambassador also explained how the different fondue recipes found in Switzerland reflect the federal character, with “each region having their own tradition, their own taste. In one region you use saltier cheeses while in another milder cheeses are used for fondue. It is really up to the taste of each canton, each district and even each municipality. In the mountain regions, recipes might differ from one valley to the other”.

According to Fotsch, just as in other countries, food is an important part of Swiss identity. Yet, when asked about culinary influences on Swiss cuisine, the Swiss ambassador noted the strong influence that his country’s neighbours, Germany, Austria, and especially Italy and France, have had on Switzerland’s cuisine.

“But with time, we created our own identity of Swiss food,” Fotsch said, adding that fondue was used before World War II to reinforce Swiss identity and the independence of Switzerland.

Diversity is nevertheless in Switzerland’s genes, according to Fotsch, who explained that Switzerland has always been a conglomerate of different minorities, “so nobody is really in a majority in Switzerland and we refuse majorities, because each Swiss is either a minority through language or through their ethnicity”.

As for his own culinary preferences, Fotsch said he is a big fan of international cuisine. The ambassador likes Asian food, noting that his partner is from Asia, as well as Swiss specialties, sophisticated French food and Italian cuisine: “when it comes to food, I am a very global person”.
Fotsch, however, quickly noticed similarities between Slovak and Swiss cuisine, especially in the two countries’ numerous cheese-based dishes. Perhaps the major difference is that in Slovakia, unlike in Switzerland, sheep cheese is widely used.

Switzerland has become increasingly health-conscious, and organic products, for which the customer knows the origin and has more than just an anonymous producer in mind, have become very popular in the country with the Dénomination d’Origin Controlée (DOC), the controlled designation of origin. The DOC has become a very important selling point for different kinds of food, according to Fotsch. He added that Switzerland, with its strong food regulations, can be called BIO, since the “Swiss are very bio-conscious”.
The use of the Swiss-made label on products will come under closer scrutiny, said the ambassador.
“Our parliament just decided that we will want to get stricter regulation for which kind of products the producers will be allowed to use the Swiss-made label,” said Fotsch, adding that currently, 60 percent of a product has to be made in Switzerland to be allowed to carry the Swiss-made label.