DRAŽOVCE, a borough of the city of Nitra, was a separate village until 1975, and this year it is celebrating its 900th anniversary. The first mention of this municipality is recorded in the Zobor Charter, dating back to 1113. 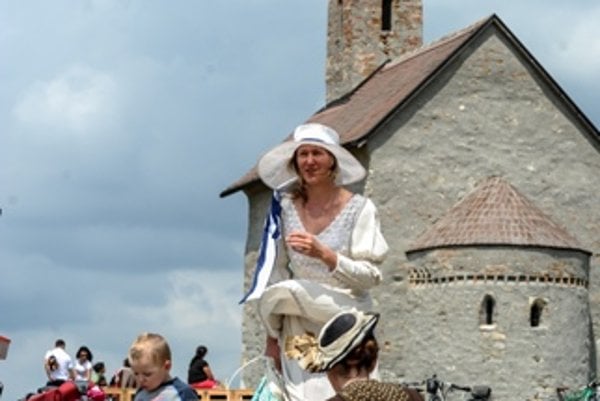 DRAŽOVCE, a borough of the city of Nitra, was a separate village until 1975, and this year it is celebrating its 900th anniversary. The first mention of this municipality is recorded in the Zobor Charter, dating back to 1113.

The celebrations to mark the anniversary were organised for the weekend of June 29 and 30, and they included a holy mass, the opening of an archaeological exhibition, photo exhibitions (one of them being a collection of old wedding photos), a tasting of local wines and a concert by the BijouTerrier band. A picnic was organised on Sunday, with offerings of tea, coffee and ice-cream, and an improvised jam session, with participants donning 19th-century costumes to replicate the atmosphere of picnics in impressionist paintings.

“We offer a café with coffee and ice-cream and a tea house with a selection of teas and hookahs,” co-organiser Radovan Baláž informed the SITA newswire. “Everyone can enjoy the picnic on the grass or on a blanket with his or her own snack,” he added. Artists painted pictures of the scene and visitors were able to join the musicians with instruments they brought from home. Sunday ended with a wine tasting and samplings of traditionally baked savoury wafers.

Baláž reminded the TASR newswire that the Dražovce celebrations were an accompanying event of Nitra’s celebration of the 1150th anniversary of the arrival of Ss Cyril and Methodius to the current Slovak territory. The Saturday programme also included musical and dance performances in the culture house, while local majorettes I.NIMA demonstrated their skills on the football pitch. On Sunday, joyrides on a tourist train were offered.

Archaeologist Alexander Ruttkay of the Archaeological Institute in Nitra told SITA that after extensive research in the Romanesque church in Dražovce, around which some of the weekend’s festivities took place, he found that although it was known to date back to the 12th century, it is in fact older. Research conducted in the years 1989 to 1997 proved that it predates the mid 11th century.

“The small Dražovce church has been ranked among pre-Romanesque monuments on the Slovak territory and it proves the high general level of Nitra and its surrounding in the early Middle Ages,” Ruttkay said. Close to the church, archaeologists uncovered 450 graves, which prove that the dead were buried here since the first half of the 11th century. On the south side, an extension was discovered which was connected with a change in the church’s function. The church, originally owned by the local nobility, became a parish church and fell under the administration of Zobor abbey. “Between the 12th and 15th centuries, the church’s size was almost double thanks to the added part, which we consider to be the parish church,” Ruttkay said. “This was completely unknown before,” he added.