POHODA, Slovakia’s biggest summer festival, provides a rare combination of high-quality musical performances, support for third sector organisations, and political discussions, not to mention a generally relaxed atmosphere. It is an event where people can enjoy music and learn something about themselves and the society in which they live, according to representatives of various NGOs that participated in the 17th Bažant Pohoda multicultural open-air festival, which took place at Trenčín Airport between July 11 and 14. 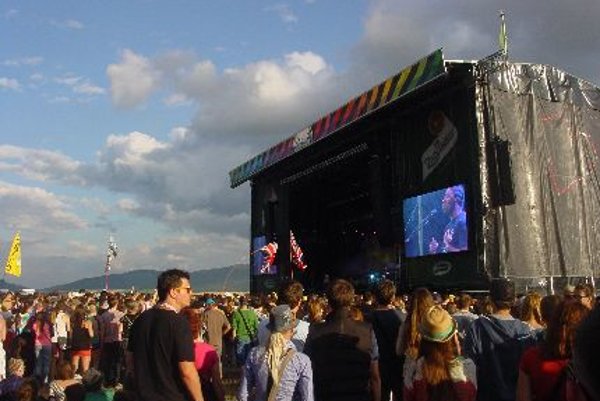 POHODA, Slovakia’s biggest summer festival, provides a rare combination of high-quality musical performances, support for third sector organisations, and political discussions, not to mention a generally relaxed atmosphere. It is an event where people can enjoy music and learn something about themselves and the society in which they live, according to representatives of various NGOs that participated in the 17th Bažant Pohoda multicultural open-air festival, which took place at Trenčín Airport between July 11 and 14.

Pohoda, which has a capacity of 30,000 people, almost sold out, festival CEO Michal Kaščák said during a press conference on July 14. Several records were broken during this year’s festival, such as the number of caravans on site (79) and the time it took for the first set of 999 tickets for Pohoda 2014, costing €49 each, to sell out (70 minutes), the SITA newswire reported.

The CNN news website ranked Pohoda as being among the 50 top festivals worldwide in 2012.

This year, the festival offered more than 129 musical performances. Along with side events and discussions there were around 250 activities all up, according to organisers. The Atoms for Peace project, featuring singer Thom Yorke of the British rock band Radiohead, as well as Australian alternative rock legends Nick Cave and The Bad Seeds were described by the media as the top performances of the festival.

Kaščák described this year’s festival as one of the most successful and said it had proceeded without any significant complications. He praised the work of the organising team and noted that the weather had been good, without storms or extreme heat.

“I have a feeling of remarkable calm [...] thanks to the fact that many extraordinary things have been done,” Kaščák told to press. “I felt goose-bumps several times during some performances. It was a very strong vintage.”

Several NGOs participating in Pohoda had small tents from which they could promote their activities. Some of the NGOs even organised discussions on various issues, such as introversion, the problem of corruption in society, and the life of homeless people.

The League for Mental Health, among others, has participated in the festival for several years, with the aim of reducing people’s prejudices about mental illness or the people who suffer from them; it even tries to educate them that “people should take care about their souls just as they take care about their bodies”, Daniela Kevélyová, the league’s project manager told The Slovak Spectator.

The league praised Pohoda organisers for offering an anonymous environment for people to discuss their problems, Stanislava Knut, another project manager for the league, told The Slovak Spectator.

“People may come [to our tent] to hear discussions about these issues and nobody asks them: Why did you come there; do you have a problem?” Knut said. “So they may learn something without confessing to anybody.”

Another NGO, the Pontis Foundation, said it received €21,240 from visitors during the festival to support ten NGOs which operate with various group of people such as foreigners, refugees, people suffering from autism, homeless people and so on, by selling coffee and refreshments, according to SITA.

Pohoda is one place where people from mainstream Slovak society get to meet members of various minorities and therefore have the chance to learn something about different cultures. For instance, organisers included a performance by young Roma from the Divé Maky (Wild Poppies) civic association, which trains and educates talented young Roma and helps them to find a place on the labour market. There were also various workshops where people could learn Roma or learn about Balkan dance.

“I love Roma culture and it surely can help convergence [between Roma and the majority population] when people discover Roma culture and do not see just bad things [about Roma, as presented in the media],” Zuzana Timková, a 20-year-old medic, told The Slovak Spectator after she had taken part in a Roma dance workshop. She added that such an approach could be more useful than official communication activities, since press conferences are not of much interest to ordinary people.

The lesbian, gay, bisexual, and transgender community (LGBT) activists and organisations had a “rainbow tent” at the Pohoda festival with the aim of showing visitors that LGBT people are part of society and active in the public sphere, Robert Furiel, an LGBT activist told The Slovak Spectator.

“For me this is an opportunity to show to young lesbian, gay, bisexual, and transgender people at the Pohoda that it is possible to be seen in public and that they are not alone,” Furiel said.

A lively start to the festival

Performances by British indie rockers Kaiser Chiefs and American alternative rock band The Smashing Pumpkins on July 11 confirmed the words of festival CEO Michal Kaščák that Thursday, the first day of the festival, once characterised by low attendance, is not “just a warm-up day” any more.

Despite overcast skies, the opening programme, including 12 musical performances, in addition to theatrical productions, a literature club and film screenings, attracted at least 22,000 visitors on the first day, Kaščák told reporters.

During the second day the British singer Kate Nash attracted more Pohoda visitors, staging a great show with her energetic performance. Enthusiastic British rock group Django Django also amused the crowds. However, the event of the day was the two-hour set by Atoms for Peace.

The third day of the festival offered perhaps the most remarkable experiences. The surprise of the day was a discussion between Štefan Hríb, the chief editor of the Týždeň weekly, and Archbishop-emeritus Bezák, one of the most popular Roma Catholic priests in Slovakia. Some visitors described it as one of the most emotive events of the festival.

During the discussion Bezák said he would probably leave the country, since he cannot do his job after being removed as archbishop under controversial circumstances. The identity of Hríb’s guest was kept secret until the day of the talk due to Hríb’s fear that the church would forbid from Bezák speaking at the festival.

“If a person of his age, with his education and experience decides to move abroad it is a very sad fact for this country,” Marta Dovalová, a former journalist said after the discussion. “I was truly touched and cried, even though I am not sure whether it was for me, Mr Bezák or the situation of life in Slovakia.”

There was widespread agreement in the media that the performance of Nick Cave and his band The Bad Seeds was one of the top performances of the day – and perhaps the whole history of the festival. Organisers said that confirmation that Cave would play was a dream come true.

“It’s no exaggeration to say that Nick Cave is one of the most significant figures of rock music history,” the organisers said in a press release. “His trips outside the alternative world and to other kinds of arts somewhat remind us of the nature of our festival.”

More on the side

Another part of the Pohoda programme was a literature-themed tent hosted by online bookstore Martinus.sk, in which dozens of writers presented their work, among them C.D. Payne, the author of a series of novels about fictional teenager Nick Twisp. The Bažant Cinematograph showed several movies and documentaries and the organisers of the Daylong Kids Park offered a series of activities for children throughout the festival.

“[Pohoda] is a festival which is not only about music but reaches many aspects of social life,” Daniela Kevélyová said. “It is great that youth, older people and families with children may enjoy it, [making] it not just a multicultural but a multigenerational festival as well.”