THESE are no clean-ups, commented Jaromír Čižnár, whom President Ivan Gašparovič appointed as Slovakia’s general prosecutor on July 17, in reference to changes to the top management of the Office of General Prosecutor that he began to make after just five days in the job. Čižnár’s predecessor, Dobroslav Trnka, will become a rank-and-file prosecutor, handing his current role as deputy general prosecutor to Peter Šufliarsky, who will fill the role on an interim basis until a competitive selection process leads to a permanent appointment. 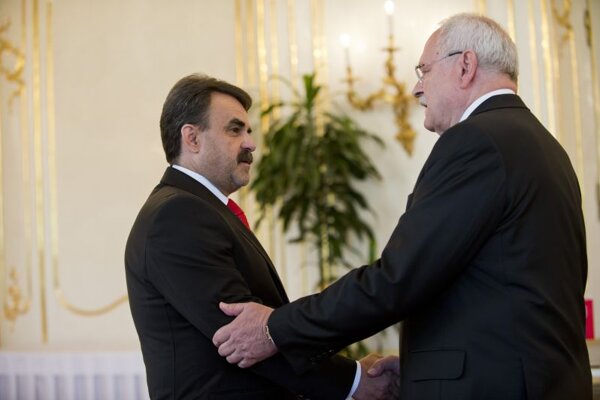 THESE are no clean-ups, commented Jaromír Čižnár, whom President Ivan Gašparovič appointed as Slovakia’s general prosecutor on July 17, in reference to changes to the top management of the Office of General Prosecutor that he began to make after just five days in the job. Čižnár’s predecessor, Dobroslav Trnka, will become a rank-and-file prosecutor, handing his current role as deputy general prosecutor to Peter Šufliarsky, who will fill the role on an interim basis until a competitive selection process leads to a permanent appointment.

Meanwhile, Čižnár denied reports published in the local media that he offered Trnka’s job to Jozef Čentéš, who was elected to the general prosecutor post by MPs in June 2011 – but blocked from taking up the role by the president, who refused to appoint him. Čižnár said that Čentéš could become his deputy, but must apply for the job in order to do so.

“It is not my priority to solve only Čentéš,” Čižnár told a press conference on July 25, as reported by the SITA newswire.

Ladislav Tichý, who managed the prosecution service on an acting basis for more than two years after Trnka’s term elapsed in February 2011, is leaving his position as a deputy general prosecutor too, with Čižnár saying that Tichý had offered his resignation of his own accord. He added that Trnka had also volunteered to step down.

After a political and judicial tug-of-war lasting more than two years over one of the most powerful posts in the country, Čižnár was elected by ruling Smer party MPs on June 18. Not a single opposition MP took part in the secret-ballot vote; they argued that the country already has a general prosecutor-elect: Čentéš.

When appointing Čižnár on July 17, President Gašparovič called on him to use his position to put Slovak criminal prosecutions on firmer footing. Along with personnel and organisational changes, Čižnár said he intended to intensify the activities of prosecutions that help protect children and women from any kind of hostility or abuse. Čižnár added that he also wanted prosecutors to pursue tax evasion cases intensively.

“Corruption is being solved primarily by the special prosecutor, but I have never said that I will not consult with him on how to progress in this area,” Čižnár said, as quoted by SITA.

Čižnár restated that the state is losing hundreds of millions of euros through tax evasion at a time when the economy is in crisis, and that it is his priority to “penalise people who are not paying those taxes”, so that normal people are not required to fill the gap through higher taxes. He said he planned to meet Finance Minister Peter Kažimír, Interior Minister Robert Kaliňák and Tibor Gašpar, the national police chief, in the near future to agree on further cooperation. According to Čižnár, such meetings were held regularly in the past and he said he intended to renew the custom.

Meanwhile, Čentéš said he would seek compensation of €150,000 from the state for violating his right to equal access to public functions and harming his reputation, according to the Hospodárske Noviny daily.

“I will shortly complete my constitutional appeal with this request,” Čentéš told SITA on July 18, adding that he would give any money he was awarded to charity. “If I succeed at the Constitutional Court with my constitutional complaint as well as the request for financial damages, I will give all the money, after deducting the cost of legal services, to charity.”

However, on July 24, the Sme daily reported that Čižnár had offered one of the two deputy general prosecutor posts to Čentéš. The latter reportedly declined, while offering no comment to the media.
“I met Mr Čentéš on Monday, just as I did several [other] people,” Čižnár said on July 25, adding that they discussed issues such as how to improve the activities of the criminal law department. “I have told him that there will be a competition announced and that if he wants he can apply for it. Mr Čentéš denied reports that I had offered him the job in two e-mails.”

Čižnár said that he would not inquire into whether Čentéš had violated disciplinary rules in 2011 when he shredded testimony alleging corruption among political parties that had been submitted by MP Igor Matovič, who is now head of the Ordinary People and Independent Personalities (OĽaNO) opposition party.

When, in late December 2012, President Gašparovič formally announced that he would not appoint Čentéš, he referred to doubts stemming from the manner in which Čentéš was elected as well as the fact that he had shredded testimony on alleged corruption provided by Matovič as the main reasons for his refusal. In 2011 Matovič provided a statement on alleged political corruption to the Office of the General Prosecutor, but the questioning had to be repeated after Čentéš, acting as prosecutor, accidentally shredded it. Both Matovič and Čentéš have stated that the testimony was destroyed by mistake, the TASR newswire reported.

Čižnár on July 25 also said that he would most likely not start any disciplinary proceeding against his predecessor, Trnka, over the controversial Glance House case, which pertains to the controversial transfer of a luxury residential development in Bernolákovo, a municipality near Bratislava, based on a letter sent by Trnka sidestepping an embargo by the Special Prosecutor’s Office on any dealings involving the building.

Trnka has not resigned over the affair despite his former boss, Tichý, stating that Trnka had acted unlawfully by issuing a legal opinion that materially affected the disputed ownership of Glance House. Tichý confirmed that Trnka had broken the rules but also argued that not every breach of the law is a crime, according to Sme, which broke the story about the controversial transfer.

“There are deadlines before which I can initiate a proceeding; I have a feeling that the deadline has passed,” Čižnár said, adding that the case is being overseen by the Trnava regional prosecutor, TASR reported.