THE PROBLEM of illegal buildings is among the most frequently discussed issues in Slovak society, with politicians repeatedly proffering ideas to tackle it. The latest raft of proposals appears in a new construction bill prepared by the Transport Ministry, the draft of which was presented to the media on July 18. 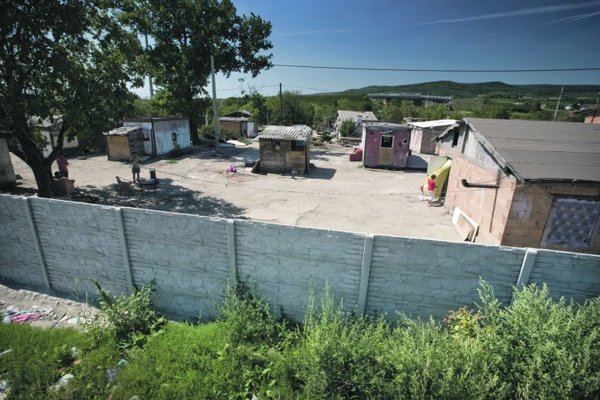 THE PROBLEM of illegal buildings is among the most frequently discussed issues in Slovak society, with politicians repeatedly proffering ideas to tackle it. The latest raft of proposals appears in a new construction bill prepared by the Transport Ministry, the draft of which was presented to the media on July 18.

The new rules will require, among other things, that contractors remove unauthorised structures. If they do not, they will be considered to have committed a crime and be subject to a fine or even imprisonment. The ministry believes the stricter rules will help in the removal of all illegal buildings from Slovakia.

However, not everybody believes the new law will work in practice, or that illegal buildings will disappear. Problems might arise in Roma settlements in particular, where both the Interior Ministry and representatives of NGOs say different rules should be applied.

“Finally we will be able to deal with existing non-permitted buildings and the law will significantly strengthen the prevention of the occurrence of such constructions,” said František Palko, a state secretary (i.e. deputy minister) at the Transport Ministry, as quoted in a ministry press release.

One of the main changes to the current legislation, which was passed nearly 40 years ago, concerns the definition of what a non-permitted building actually is, and the rules on how to deal with such a structure. If the local construction office learns about an illegal building, it will have to order the builders to stop all work on it, and order suppliers to halt deliveries of water and energy to the construction site. Finally, it will order the demolition of the building at the expense of the contractor.

If the builder refuses to follow instructions, the municipality will be allowed to put the land in question up for auction. The winner of the auction will then be required to demolish the building but will have the right to construct something new, Palko told the Pravda daily.

People without the necessary building permits will be threatened with higher fines and imprisonment if they do not remove illegal structures. If builders are self-employed, they could also face the loss of their licences, according to the proposal.

Though the new law will not include an option for ex post facto legalisation of illegal buildings, the ministry said it would allow the owners of non-permitted buildings to receive permission within one year of the act coming into force, the SITA newswire wrote.

While developers and building companies have welcomed the new rules, highlighting only minor problems, NGOs active in Slovakia say that it will not be so easy to apply the law when it comes to dwellings in illegal Roma settlements.

Laco Oravec, programme director at the Milan Šimečka Foundation, an NGO, said that there are two types of illegal buildings. He characterised the first category as including structures which are the result of some kind of arrogance, for instance by wealthy individuals who simply ignore construction rules. In this respect Oravec welcomed the stricter rules, saying it is important to find a mechanism to combat their construction, even if it is demolition.

On the other hand, he said, there are buildings in unlicensed Roma settlements which are often the result of the difficult living situation of the people who live in them. Therefore this category is much more sensitive and needs some deeper understanding of the reasons that have led to the current state, Oravec told The Slovak Spectator.

According to him, addressing this problem by passing a strict law which might allow mass demolition of illegal buildings in Roma settlements is not the right approach. Oravec also said that it would be difficult to legalise such structures as they often do not meet the building regulations set by law.

The new legislation should offer assistance to Roma who want to legalise their dwellings and give them enough time to do so. If this does not happen, many Roma families could face big problems, and even the loss of their homes, Klára Orgovánová from the Roma Institute, another NGO, told The Slovak Spectator.

The Interior Ministry, which deals with Roma issues on behalf of the government, also sees potential problems with legalising such buildings, and has said that the one-year period is too short. It will ask the Transport Ministry for an exception for Roma.
“The [bill] contradicts the intention [of the ministry] within the Roma reform to gradually legalise settlements and to [resolve the situation] of the lands on which they stand,” Ivan Netík from the press department of the Interior Ministry told The Slovak Spectator.

The ministry, in cooperation with the government proxy for Roma communities, Peter Pollák, has already established a working group whose task will be to try to resolve the legal status of the land on which Roma dwellings are built, and based on this experience propose legislative changes, Netík explained.

Oravec said he supports the idea of granting an exception to Roma settlements. He considers the Interior Ministry’s plans to allow people to obtain their own housing through the Roma reform reasonable.

“It is a bit silly if one ministry prepares a decisive and sharp law, while the second thinks about how to solve the situation gradually,” Oravec said.

When asked about the possible changes to the law as applied in Roma settlements, Transport Ministry spokesperson Martin Kóňa said that the law would not make any distinction between buildings based on the ethnicity of the owner. The ambition of the new law is not to solve the Roma problem, but “to solve the problem of illegal ‘haciendas’ and people who think they stand above the law”, Kóňa told The Slovak Spectator.

Kaník offers his own proposal

Last July Pavol Frešo and Ľudovít Kaník, both members of the centre-right opposition party the Slovak Democratic and Christian Union (SDKÚ), stood in front of a Roma settlement in Plavecký Štvrtok, Bratislava Region, to present their own proposed amendment to the Construction Act, which they said would speed up demolition of illegal buildings.

This year Kaník chose a similar spot to introduce his proposed changes to the current government draft legislation. He picked an illegal Roma settlement which has recently appeared in the Unionka area near Zvolen, Banská Bystrica Region.

According to his proposal, it should be the state that demolishes illegal buildings. The authorities should ask for permission from the landowner or village to remove buildings, and then ask those who constructed them to pay for it. If they do not have the money, they can, for example, work off their debt, Kaník said, as reported by the TASR newswire.

Regardless of the political party which prepares the law, in case of Roma settlements it always “leads towards demolition”, said Orgovánová of the Roma Institute.

She added that municipalities are in a state of chaos when it comes to the land ownership situation and that the existing list of constructed buildings often proves that the responsible authorities do not follow the formal buildings approval process. Moreover, they sometimes do not prevent Roma families from building settlements if they know they can look after themselves and that other people do not want to build anything else on the land.

Oravec said that there are other ways to help people from marginalised communities to solve their problems, including housing, apart from demolition of buildings. The state should offer them help as it is also partly responsible for their current situation.

“The tools are much broader and diverse, but the politicians often do not want to see this,” Oravec added.