New election rules on the way

AFTER the 2012 general election took place in the shadow of the notorious Gorilla scandal, all of the current parliamentary parties pledged to change campaigning and party financing rules within one year to make them more transparent and fair. The Interior Ministry, controlled by the Smer party, which, since the 2012 elections has ruled the country with a parliamentary majority, delivered its draft changes, after a delay of several months, in mid July 2013. 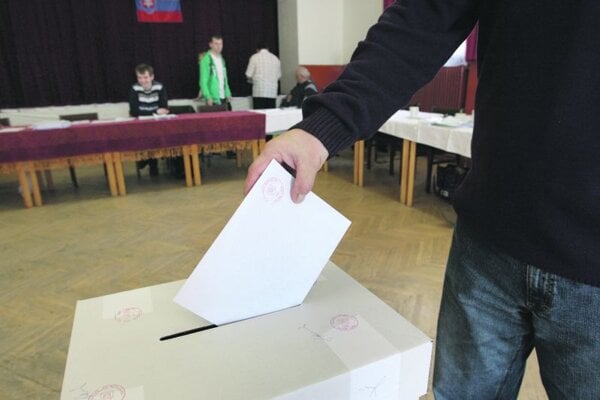 AFTER the 2012 general election took place in the shadow of the notorious Gorilla scandal, all of the current parliamentary parties pledged to change campaigning and party financing rules within one year to make them more transparent and fair. The Interior Ministry, controlled by the Smer party, which, since the 2012 elections has ruled the country with a parliamentary majority, delivered its draft changes, after a delay of several months, in mid July 2013.

If the new election campaign rules clear the cabinet and are passed by parliament, they could go into effect as early as next year, and would thus affect the spring 2014 presidential election.

Under the new rules, political parties and movements can spend no more than €3 million on general election campaigns, while presidential candidates are limited to €500,000 for both rounds of the election. Financial limits have also been proposed for regional and municipal elections.

Transparency International Slovensko (TIS) director Gabriel Šípoš welcomes the limits, but believes they are too low, “which might give an advantage to politicians who are in power, because they can easily, and without sanctions, abuse their posts”.

A similar objection was voiced by independent presidential candidate Andrej Kiska, who, together with another independent candidate, Radoslav Procházka, is the only one to have started his billboard campaign around the country. He called the financial limits discriminatory, giving candidates from political parties an advantage.

“Politicians get media space worth dozens of millions of euros for free, and they even use every tragedy for their own promotion,” Kiska said, as quoted by the TASR newswire. “Meanwhile, independent candidates who don’t want to serve the existing political parties could have the promotion of their own ideas for their own money banned.”

TIS praises the fact that the proposal increases the transparency of campaign financing, mainly by requiring not only political parties, but also individual candidates, including those at the municipal level, to publish their campaign expenditures, and by stipulating that all gifts received by presidential candidates must be published.

The ministry also proposes that political parties and movements set up a special account for financing their campaigns, one for each campaign, in order to increase the transparency of the financing, the Sme daily reported on July 17. The account balance and list of transactions should be accessible to third parties, e.g. the public.

Political groups will also be required to publish the list of campaign expenses on their websites, Sme reported, citing the proposal. The same goes for presidential candidates.
Every year, parties and movements will be required to publish on their websites or in the press a list of people who contributed gifts totalling more than the monthly minimum wage, requiring any gift worth more than €337.70 to be reported.

Unlike in the past, changes would mandate that rule violations are sanctioned financially, and state bodies will monitor the process. While transparency watchdogs are glad to see more transparent and stricter sanctions, the fact that there will be no independent body to oversee the candidates’ observance of campaign financing rules has drawn criticism. TIS head Šípoš said the fact that the Finance Ministry will be responsible for the audit is the main drawback of the drafted changes.

“Less than a year ago the Finance Ministry wasn’t even willing to publish the documentation for the previous [2009] presidential election, based on the info-law,” Šípoš told The Slovak Spectator. “Am I supposed to believe that now it will be a better controller?”

“I cannot imagine Minister [Peter] Kažimír investigating the Smer party in the event of suspicions about murky financing, and how his subordinates will rake the party chairman [Robert] Fico over the coals,” Šípoš told The Slovak Spectator, adding that the government acting as the control body might provoke pressure and accusations of bullying from the part of opposition parties, especially since the ministry wants to introduce a moratorium and financial limits for campaigning, which is sure to lead to numerous accusations of unfair practices.

“There is simply the need for a strong, impartial control body that will have respect and trust,” Šípoš said.

The draft amendment re-introduces a 48-hour pre-election moratorium for campaigning and advertising in all elections, to be observed by parties and the media. They must also refrain from publishing any poll results for three weeks prior to the elections.

Opposition parties have said that in the era of electronic communication this proposal is nonsense, according to TASR.

“A moratorium on opinion polls and campaigns is not only uncontrollable in the era of the internet, but it is always dubious whether they have a positive impact on the fairness of elections,” Šípoš agreed.

TIS, the Institute for Economic and Social Reforms (INEKO) and the Slovak Governance Institute (SGI) asked ten major political parties to agree to the pledge in early February 2012. The NGOs proposed seven specific measures in the pledge, six of which they said are recommendations from the Council of Europe.

The pledge was signed by the four parties of the outgoing government: the Slovak Democratic and Christian Union (SDKÚ), the Christian Democratic Movement (KDH), Freedom and Solidarity (SaS) and Most-Híd, and the then opposition Smer party, as well as three parties which were at that time not represented in parliament: Ordinary People and Independent Personalities (OĽaNO), 99 Percent – Civic Voice and the Hungarian Coalition Party (SMK).

The NGOs drafted the following commitments for the parties to sign: to establish an independent control body, to enforce stricter sanctions for not following the law, to set up a central database of income and expenditures of all political candidates and parties, to create a mechanism for receiving financial gifts from more donors, to publish non-refundable gifts, obligatory publishing of income and expenditures for individual candidates at both the state and municipal levels, to refine the requirements for declaring the assets of politicians and to declare possible conflicts of interest.

While many of the commitments are included in the Interior Ministry’s draft law, several of them were ignored, among them the financing of political parties by the state, “despite the fact that Smer pledged prior to the elections to lower the dependence [of parties] from the state by tying the state money to their ability to find private resources too,” Šípoš noted.