Working together in technology – and art

AKIRA Takamatsu is pleased with the response of Slovak audiences to traditional forms of Japanese art, such as Noh or Kyogen theatres. These performances, as he says, require a sophisticated audience to fully absorb, and are sometimes even considered by younger Japanese audiences to be too traditional. The Japanese Ambassador to Slovakia says that the two nations understand each other very well culturally, adding that he is impressed by the talents of Slovaks. The Slovak Spectator spoke to Akira Takamatsu about the recent visit of the Japanese royal couple to Slovakia, the challenges of Japan’s energy policies, plans for a proposed youth exchange as well as the potential for business and cooperation between the Visegrad Four and Japan. 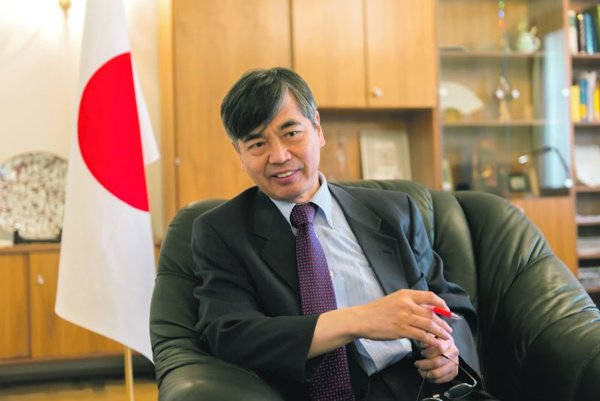 AKIRA Takamatsu is pleased with the response of Slovak audiences to traditional forms of Japanese art, such as Noh or Kyogen theatres. These performances, as he says, require a sophisticated audience to fully absorb, and are sometimes even considered by younger Japanese audiences to be too traditional. The Japanese Ambassador to Slovakia says that the two nations understand each other very well culturally, adding that he is impressed by the talents of Slovaks. The Slovak Spectator spoke to Akira Takamatsu about the recent visit of the Japanese royal couple to Slovakia, the challenges of Japan’s energy policies, plans for a proposed youth exchange as well as the potential for business and cooperation between the Visegrad Four and Japan.

The Slovak Spectator (TSS): How do you assess the visit of the Japanese royal couple to Slovakia? How did, in your opinion, the locals in Slovakia respond to the visit? What are the specific outcomes of the visit?
Akira Takamatsu (AT): Their Highnesses Prince Akishino and Princess Akishino during their trip to Bratislava and eastern Slovakia met excellent people and experienced a warm welcome from the locals. I accompanied them to their visit to a small village with a studio for making fujaras [a traditional Slovak musical instrument] and the locals came out of their houses to greet the royal couple. I think it was not only out of curiosity, but also due to warm, welcoming emotions.

TSS: There are plans to launch a Slovak-Japanese council to support the inflow of investments from Japan, which were discussed by Prime Minister Robert Fico and his Japanese counterpart in Warsaw earlier this year. What are the reasons behind the launch of such a council?
AT: Shortly before the visit of the royal family to Slovakia, the first high-level meeting between the Visegrad Four prime ministers and their Japanese counterpart took place in Warsaw. Prime Minister Robert Fico and his Japanese counterpart, Shinzo Abe, held a bilateral talk, in which the idea of setting up a business forum or a bilateral Japan-Slovak council was touched upon. It is still an idea at this point, which will need some concrete shape in order to promote further economic relations and help foster a better understanding of each other’s conditions.

TSS: How would you assess Japanese investors’ interest in Slovakia? What sectors of Slovakia’s economy and which of Slovakia’s regions do you consider to be of interest for the inflow of Japanese investments?
AT: So far, there are as many as 47 Japanese-related firms active in Slovakia. Most of them are directly or indirectly linked to the automotive industry, which is rather natural due to the strength of this industry in Slovakia. There are Japanese companies producing spare parts or automobile-related software, which could extend their business to Slovakia. But there are also companies active outside the automotive sector, for example Panasonic, the producer of DVD systems in Slovakia, to be exported mainly to the European Union region. Possibilities are not limited only to these areas: Slovakia, as a euro area member with attractive human resources, has a very good basis for inviting foreign investment. Slovak labour costs are not as high as those in some other countries, while Slovaks and Japanese share some characteristics, for example, they are not so assertive in daily life.

TSS: There are plans to intensify cooperation between Japan and the Visegrad Group countries in the area of science and technology. A workshop held in Smolenice between July 9 and 11 focused on this topic too. Could you please elaborate on these plans?
AT: The workshop, which I also attended, brought together 12 Japanese researchers with their Slovak, Polish, Czech and Hungarian counterparts to discuss, among other things, the development of advanced materials, such as biomaterials and nanomaterials, which is definitely one of the most important areas of science and technology research today.
This time they exchanged views and I hope this meeting might have served as a basis to establish good contacts among them, because having a good network among researchers is a crucial condition for cooperation.

TSS: Why is the V4 region of interest to Japan?
AT: The V4 countries have a common historical background and so far have been taking common approaches in various fields, and in addition, the V4 countries and Japan share the same basic values. Of course, we will develop bilateral relations as well with each of the four countries. The areas of interest for V4-Japan cooperation would include energy issues, ODA (official development assistance) and security issues linked to the globalisation of the international community. For example, cooperation in the area of energy and the environment has considerable potential, not only between Slovakia and Japan, but also between Japan and the V4 group. And 2014 is the V4 plus Japan Exchange Year. I really hope we will see further development of people-to-people exchange between the V4 and Japan, including the one between Slovakia and Japan.

TSS: What are Japan’s current plans regarding its nuclear power stations and the future of their operation? Which sources of energy would Japan like to rely on in the future?
AT: This month we launched a new atomic energy regulatory authority, which will review safety conditions at all the existing nuclear power stations in Japan: 50 nuclear reactors have been suspended since the accident in Fukushima took place, and only two are still working. Very strict safety conditions have been adopted and it will take some time until the authority gives the final word over the fate of the power stations. Japan still survives thanks to the re-starting and strengthening of functions of the existing thermal energy plants. However, to cope with the new situation, we have to import more liquefied petroleum gas than ever, which has pushed our trade balance into deficit. We are now at a very important crossroads for selecting the path for the future energy direction. The nuclear energy issue will remain as one of the most important political or social issues for Japan for years to come.

TSS: Fico has also said that Slovakia is interested in concluding an agreement on social security with Japan in connection with the launch of a working holiday programme, making it possible for young people from Slovakia and Japan to spend some time in each other’s countries. Could you talk about these plans? How would this youth exchange work?
AT: A social security agreement has been discussed between the relevant authority in Slovakia and that of Japan for several years and I hope it will be concluded as soon as possible. The issue is to avoid double payment of social security, especially for Japanese businesspeople who are paying their social security fees in Japan, and when they come to Slovakia they also face the duty to pay social security here. In order to promote good economic relations, the social security agreement is very important.

Another issue is to promote an exchange between the youths from Slovakia and those from Japan. For example, within a one-year period Japanese youths could visit Slovakia and vice versa. As there is already a good functioning system of youth exchange with some other countries, we think this could work well with Slovakia, too. I cannot go into much detail, but, for example, once the system is agreed on, in one year, 200 Japanese and 200 Slovak youths could experience the other country. They could, for example, do some temporary work to earn money for their stay.

TSS: On March 25, 2013, the EU and Japan officially launched negotiations for a Free Trade Agreement (FTA). How could this free trade agreement benefit Japan? What impact would it have on relations between Japan and Slovakia?
AT: The EPA, or FTA, is a very important tool to combat some possible protective trade or economic measures taken by each government, and especially in times of economic difficulty, we have to be very careful not to rush such measures too hastily. On the contrary, we have to make our own market as open as possible and to get rid of unnecessary economic and trade barriers so that we can make use of the economic potential of both the EU and Japan more effectively. By working out EPA or FTA between the EU, the number one economy of the world and Japan, the number four economy in the world, we could make both economies more active and create more new jobs both in EU countries and in Japan. Perhaps the EU and Japan could create a model economic partnership to be followed by other economies of the world, which would be a real contribution to the world economy.

TSS: Slovak classical music ensembles make frequent visits to Japan. What is behind their popularity in your homeland?
AT: I have been very much impressed by the Slovak people’s talent, especially in the field of music. The Slovak Philharmonic toured Japan several times, and Lúčnica, along with other folklore groups, also visited Japan on several occasions. I heard they were very popular in Japan and I think our nations understand each other culturally very well. This is also proven by the fact that both Japanese pop culture and traditional culture are received well by Slovak audiences. There are two major annual pop-culture events in Bratislava, Comics Salon and Anime Show, which attract more than 10,000 visitors for each event. When I addressed the audience of a Japanese pop-culture event I was surprised by the number of young people attending, and it made me feel that young people are essentially the same everywhere.

TSS: Has tourism potential been fully explored between Slovakia and Japan?
AT: Every day in this summer season I see lots of Japanese tourists just staying in the Main Square, maybe for one or two hours, and I would like them to see more places in Slovakia outside of Bratislava, such as Spiš Castle, Poprad or the High Tatras. I think it will happen sooner or later, though currently most of the Japanese tourists visiting Slovakia are on their way to Budapest or Prague and they stop here for several hours. Slovakia has a lot of potential to promote tourism, and I would like to see more efforts made in that direction.