JAPANESE performers can hardly complain about the lack of an audience in Slovakia, since the locals appear to be quite responsive to different facets of Japanese culture. Yet, to mark the two decades of diplomatic ties between Slovakia and Japan, even more aspects of Japanese culture will be on offer in 2013. The culture of this distant land will also be represented within the European Capital of Culture 2013 (ECOC) in Košice through a series of events ranging from traditional theatre and music, through ancient games and tea ceremonies to modern visual art, performances and bonsai. 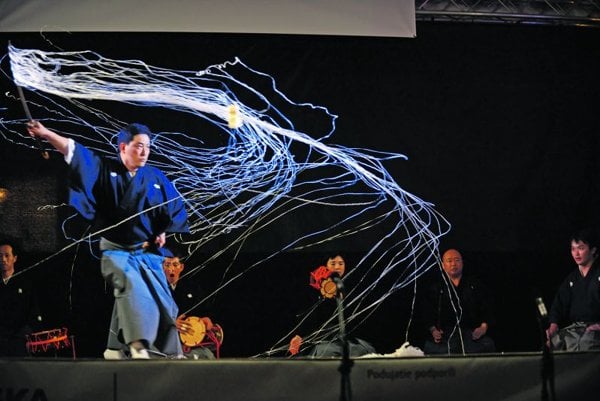 JAPANESE performers can hardly complain about the lack of an audience in Slovakia, since the locals appear to be quite responsive to different facets of Japanese culture. Yet, to mark the two decades of diplomatic ties between Slovakia and Japan, even more aspects of Japanese culture will be on offer in 2013. The culture of this distant land will also be represented within the European Capital of Culture 2013 (ECOC) in Košice through a series of events ranging from traditional theatre and music, through ancient games and tea ceremonies to modern visual art, performances and bonsai.

“When planning our events, we are trying to keep a good balance between traditional and contemporary elements of our culture – to introduce properly what Japan is,” Ikuko Fujii, second secretary at the Embassy of Japan in Slovakia, told The Slovak Spectator.

The traditional Japanese Week, to be held between August 14 and 20 in Bratislava and Košice, will include a martial arts demonstration, an architectural presentation, a Japanese culinary “Kaiseki” demonstration and what Fujii called unique “Picture Book Projects”, a combination of music and the reading of Japanese fairy tales.

The Yamamoto Noh-Gakudo, a Japanese troupe that performs traditional Noh theatre, is returning to Slovakia after last year’s success, for performances at Bratislava Castle and Košice’s historical Town Hall, according to Fujii.

“We will have performances of the same combination of plays, The Robe of Feathers (Hagoromo), which will be slightly shortened, and The Ground Spider (Fujigumo), a part of which was played as an encore last year,” Petko Slavkov, a Bulgarian fan of Noh, who was allowed by master and Yamamoto Noh-gakudo theatre president Akihiro Yamamoto to learn the art and join the ensemble, told The Slovak Spectator.

According to him, the idea of the performance is to contrast Japan’s aesthetic views on “still idleness and graciousness” of the former theatrical form with the “vigour and energy” of the latter.
“We are putting on stage two Noh plays which have a very contrasting character, and yet they both belong to the same performing art and share the same rules for techniques and expression,” Slavkov said of the performances, which will take place in Bratislava on August 17 and in Košice on August 20, where the performance might be accompanied by a workshop on the fundamentals of Noh theatre on the day before the performance.

“These two pieces put together represent the perfect contrast of Japanese aesthetics,” Slavkov explained in reference to the selection of dramas for the Slovak tour, adding that both performances will offer Slovak subtitles.
Slavkov praised the interest of people in Slovakia and Bulgaria in cultures very different from their own, adding that “in order to enjoy Noh, people must forget their modern fast-paced rhythm of life, shift their point of view and observe the stage with the eyes of a person who lived centuries ago. I think with the people of Slovakia and Bulgaria, this shift came very naturally. Nobody complained about the slow pace of the dances or the strange sound of the flute and drums”.
“This is why we are coming again, with a richer menu this year,” Slavkov concluded.

Japan, too, has had a role in the ECOC project: Japanese drummer Ichitaro performed at the opening ceremony. The Japanese presence was supported by the Japanese Embassy and the EU-Japan Fest Japan Committee, a non-governmental organisation to support projects linked to the ECOC.

Kyogen, a traditional Japanese theatre of comedy, was performed twice in Košice, in March and in May, receiving a lively response. A special feature of these performances was that the Japanese master, Motohiko Shigeyama, the son of Shime Shigeyama, who first brought Kyogen to the Czech Republic, was joined by the Czech Kyogen players from Brno. Another form of Japanese theatre brought to Košice was shadow theatre, introduced by Japanese artist Noriyuki Sawa, who performed as part of the Imaginations 2013 street performance, and also within the International Puppet Festival Virvar on June 6.

In June, the Original Tempo troupe from Japan demonstrated their interactive, improvised experimental performance as part of the “Use the City” festival.

One of the highlights of the ECOC productions was the concert by the Tokyo Metropolitan Symphonic Orchestra, conducted by Kazuhiro Koizumi, as well as the performance of solo violinist Sayaka Shoji, who won the prestigious Paganini Competition as the youngest contestant, aged just 16.
Other Japan-connected events in the European cultural capital were the bonsai exhibition – with a lecture by Takahiro Mori from Japan – and presentations of traditional Japanese games, go and shogi, which have a surprisingly strong background in Slovakia, including hobby clubs (www.sago.sk and www.sogi.sk).

From more contemporary art genres, the “Košice artist-in-residence” project K.A.I.R. brought Slovak artist Erik Šille to Japan, and young Japanese visual artist Juka Araikawa to the Terasa housing estate in Košice, where she worked on her exhibition, presented in May on Strojárenská Street.

The ECOC year, however, is far from over, and dance performances and residences by Hiroaki Umeda and Yuzo Ishiyama are expected within the International Art Project “White Night” and the “New Dance Days” festival. A space installation by Chiharu Shiota and two exhibitions called European Eyes on Japan and a photo exhibition, Making as a Living, can be expected by October and November.

Back to the capital

There are many events celebrating Japanese-Slovak ties in Bratislava, too. Starting with the “Day of Friendship” in January, a Kyogen performance by Master Shigeyama and the Kyogen theatre from Brno, and a Koto and Shakuhachi (traditional Japanese instruments, harp and flute) concert by Hiroshi Yonezawa and Eriko Kumazawa followed. The performance of Sumako Koseki in February combined traditional Butoh and contemporary dance.

Suiseki, a special phenomenon that spread to Japan from China, involving the collection of unique stones resembling scenes in nature, is closely connected with traditional eastern religions, and this decorative art form was presented at the Suiseki and Bamboo exhibition in the University Library in Bratislava in June.

After the Japanese Evening on July 25, offering a taste of its culture with an umami culinary demonstration by embassy chef Naoki Eguchi, a concert by Takao Seres and Veronika Prokešová and a shogi and go workshop, as well as a presentation about Japan by students of East-Asian studies, Zuzana Michalová and Boris Kollář, the Japanese Week will contain a series of embassy-sponsored activities.