ALTHOUGH Koreans who come to Slovakia to work stay here for a relatively short period of time, they get along well with the Slovak people and become good neighbours and friends, says Sang-hoon Park, the ambassador of the Republic of Korea to Slovakia, who believes that these people “are invaluable assets in bringing the two cultures closer together”. The Slovak Spectator spoke to Sang-hoon Park about his diplomatic mission to Slovakia, the economic challenges faced by his homeland, the free trade agreement between Korea and the EU as well as investment and tourism potential. 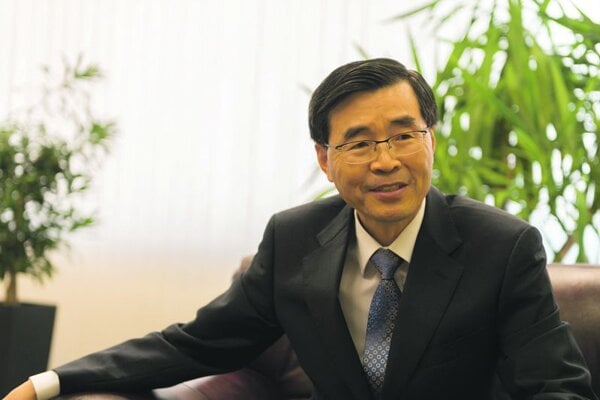 ALTHOUGH Koreans who come to Slovakia to work stay here for a relatively short period of time, they get along well with the Slovak people and become good neighbours and friends, says Sang-hoon Park, the ambassador of the Republic of Korea to Slovakia, who believes that these people “are invaluable assets in bringing the two cultures closer together”. The Slovak Spectator spoke to Sang-hoon Park about his diplomatic mission to Slovakia, the economic challenges faced by his homeland, the free trade agreement between Korea and the EU as well as investment and tourism potential.

The Slovak Spectator (TSS): You started your diplomatic mission to Slovakia in October 2012. Do you have any specific areas that you would like to focus on during your stay here?
Sang-hoon Park (SHP): Bilateral relations between Slovakia and Korea are now very stable and healthy, and have been mutually beneficial for the past 20 years, with economic cooperation being the most prominent aspect of our relations. For the past 20 years, Korea has proved to be a very reliable economic partner of Slovakia in terms of trade and investment. During my tenure in Slovakia, I would like to focus on two important tasks: to deepen and further develop the existing good economic relations as well as to expand cooperation in the economic field into other areas such as culture, education, tourism, sports and so on.

Particularly, on the occasion of the 20th anniversary of diplomatic ties, the embassy is concentrating on promoting cultural exchange between the two countries and, in this regard, this year the embassy is holding a series of cultural events which includes: a Korean traditional dance performance, a Slovak-Korean friendship concert, a Korean tourism photo exhibition, a Korean film presentation, as well as a Korean chamber music concert.

TSS: Have you encountered something in Slovakia that you had not expected or that has surprised you?
SHP: I would not say that I have encountered anything unexpected or surprising in Slovakia, but rather I would say that I was impressed by the Slovak people’s enthusiasm and motivation as well as their humility and welcoming spirit. Indeed, Slovakia is a great source of inspiration for how it has built and developed its statehood virtually from scratch over the past 20 years.

TSS: There are already almost 100 Korean companies in Slovakia. Do you still see room for the arrival of new Korean investors? Which economic sectors or regions of Slovakia are appealing for Korean investments?
SHP: The past 10 years have seen major Korean companies such as Kia and Samsung come to Slovakia, along with their subcontractors and suppliers. Cumulative investment by Korean companies reached almost €1.8 billion last year. So far, investments by Korean companies have been concentrated mainly in the automotive and electronics sectors, but I believe there is potential for new investment by Korean companies in chemical production, ICT, and R&D, if Slovakia maintains an attractive environment for foreign investment in these fields.
Nevertheless, under the current global economic situation, what is more important for Slovakia is to keep the existing investors and encourage them to expand their activities in the country by providing them with a more business-friendly environment. In fact, Kia, Samsung and some other Korean companies have been increasing their investment in the past three to four years, despite the
economic downturn.

TSS: Last October, representatives of the Slovak Chamber of Commerce (SOPK) and the Korea Importers Association (KOIMA) signed a memorandum of understanding. What benefits should this memorandum bring to the Republic of Korea and Slovakia?
SHP: SOPK and KOIMA have agreed in the memorandum to closely cooperate in promoting bilateral trade and investment. More specifically, they agreed to exchange information on commercial opportunities, industrial cooperation, and the establishment of joint ventures as well as trade-related policy and legislation, and to ensure cooperation among their member companies. I expect that the memorandum will boost bilateral trade and investment. KOIMA is the only import-oriented Korean organisation promoting trade through activities such as introducing qualified overseas suppliers, dispatching purchasing missions abroad and holding the Import Goods Fairs. In this regard, I believe that the memorandum will be beneficial, especially to the Slovak side to increase its exports to Korea.

TSS: What impacts has the Free Trade Agreement (FTA) between the EU and the Republic of Korea, effective since July 2011, had on Korean-Slovak economic ties?
SHP: Trade between the two countries increased by 13 percent last year, reaching a record high of $4.8 billion. Last year, Korea’s exports to Slovakia increased by 12.7 percent, while Slovakia’s exports to Korea increased by 20.8 percent on a year-on-year basis. This is indeed a very surprising performance, considering all the difficulties the world economy is facing. Though it is
difficult to tell exactly how much can be attributed to the effect of the FTA, the FTA has beyond doubt had a positive impact on the increase in our bilateral trade.

If we look at the trade figures between Korea and the EU as a whole, during the first 18 months of the Korea-EU FTA, Korea’s imports from the EU increased by 10 percent, while its exports to EU decreased by 11 percent. However, as far as products which enjoy preferential tariffs under the FTA are concerned, both Korea’s imports from and exports to the EU increased by 14 percent and 7 percent respectively, which clearly demonstrates the positive effect of the FTA on bilateral trade.

TSS: Do the problems of the eurozone affect the Korean economy? What are the main challenges which the Korean economy currently faces?
SHP: As an open, export-oriented economy, Korea cannot be immune to the negative effects of the eurozone crisis. Europe represents about 7 percent of our direct exports, while China represents about 25 percent of exports from Korea. Europe is the first-focus market of China, which assembles and re-exports many Korean products.

Therefore, the Korean economy is affected both directly and indirectly by the problems in Europe. Despite the unfavourable economic climate, Korea has managed to sustain moderate economic growth; the labour market conditions are continuing to improve, with the private sector leading job creation. The country’s fiscal position is one of the strongest in the world, leaving greater room for fiscal controls.

The current main challenge for the Korean economy is to search for a new engine of growth. With this in mind, the newly inaugurated government of Korea is seeking to foster a “Creative Economy”, which is based more on services than on manufacturing, on innovation rather than on industrial brawn. Creative Economy requires a paradigm shift, away from playing catch-up with the advanced economies to becoming a trendsetter driven by creativity, making use of science and IT technology.

TSS: Slovak has been taught as a foreign language at Hankuk University of Foreign Studies for almost 10 years. Is there an interest in the Republic of Korea for learning Slovak? Why would Koreans pick Slovak as the focus of their studies?
SHP: An interest in the Slovak language started in Korea with the establishment of diplomatic relations between Korea and Slovakia in 1993. There has been greater demand for Slovak language ever since, as political, economic and cultural exchanges between the two countries have increased, and many Korean companies have moved to Slovakia. Nowadays, more and more Korean students choose to study Slovak language, Slovak literature or Central and Eastern European studies, which prove their growing interest in the region and in Slovakia in particular.

As for fellowships for Slovaks, the Korean government runs the Korean Government Scholarship Programme to provide international students with the opportunity to conduct advanced studies at higher education institutions in Korea. The programme aims to develop global leaders and to strengthen Korea-friendly networks worldwide. From 2004 to 2012, 11 Slovak students were chosen to participate in this programme. I am pleased that this year three Slovak students are being given the opportunity to attend the graduate programmes.

TSS: Apart from Korean investments, the number of Korean tourists in Slovakia is continuing to increase. What aspects of Slovak culture, history and nature are most appealing to Koreans?
SHP: Though we do not have the exact number of Korean visitors available, I think, their number is increasing year by year. But many of them still pass through Slovakia or spend only half a day in Bratislava and then return to Vienna or Budapest. I think Slovakia has many qualities which can attract Korean tourists to visit the country: Slovakia is endowed with beautiful nature and diverse landscapes. Secondly, Slovakia is a historic land in the heart of Europe, where generations of ancestors have been leaving traces; and thirdly, Slovakia’s natural beauties are well combined with cultural-historic sights all over the country. To attract more foreign tourists, you need to conduct more promotional activities and systematic marketing, and develop various tour packages.

TSS: Representatives of the cities of Nitra and Gyeongju signed a cooperation agreement in April. What benefits will this agreement bring to these towns? Are similar agreements also being signed between other Korean and Slovak towns?
SHP: The Cooperation Agreement signed between Nitra and Gyeongju was the first agreement of its kind signed on the local government level of the two countries. Both Nitra and Gyeongju share the same characteristic as old capital cities rich in cultural heritage, dating back more than 1,000 years. They agreed to promote economic, cultural and academic exchange between the two cities. The cooperation shows that the geographical distance between the two countries cannot be an obstacle to building a close partnership. I hope that the cooperation will bring tangible benefits such as collaborative projects and increased tourism. I also hope that the case of Nitra and Gyeongju will become a model precedent which will inspire other municipalities to follow suit.

TSS: How big is the Korean community now, and how would you describe its level of integration into Slovak society? What, in your opinion, are the main challenges Koreans here face?
SHP: There are around 2,000 Koreans living in Slovakia. Most of them are employees of Kia Motors, Samsung Electronics or other Korean companies and their families. They usually stay in Slovakia for three to four years and then return to Korea. Although they stay in Slovakia for a relatively short time, they get along well with Slovak people, and become good neighbours and friends, sharing each other’s unique cultures and learning from each other. These people are invaluable assets in bringing the two countries closer.