IN A WORLD dominated by fast food, slow-cooking is more than just a method of preparing food that intensifies the flavours of a dish. In the homeland of Djumantoro Purwokoputro Purbo, the Indonesian ambassador to Slovakia, it is a tradition with deep historical roots. Yet slow-cooking has also provided the culinary world with dishes that are popular outside of Indonesia.

Related: Indonesian cuisine I Salad I Main dish I Other cuisines 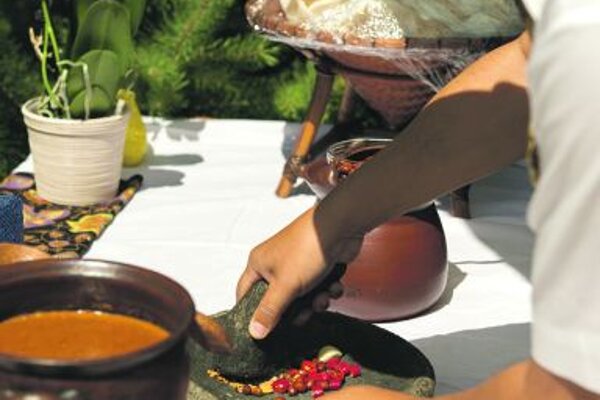 “To make rendang [a spicy meat dish], you probably use more than 20 spices and then cook the dish slowly for several hours, or even days, to get the flavour, and also to get the tenderness from the meat,” Rajendra Thalib, an established Indonesian chef who was visiting Bratislava in June at the invitation of the Indonesian embassy here, explained when sharing the secrets of a dish that has become popular worldwide.

According to Thalib, rendang, a dish from the Sumatra region, was selected in a CNN International poll couple years ago as one of the most popular dishes in the world.

Djumantoro Purbo, however, chose some different dishes for the Cooking with Ambassadors programme, prepared by The Slovak Spectator in cooperation with TV Sme, which were no less illustrative of the richness of his homeland’s cuisine: gado-gado, a salad consisting of boiled vegetables dressed with a rich peanut sauce, and pepes, grilled fish wrapped in banana leaves.

Djumantoro Purbo explained that gado-gado, which in English means, literally, mix-mix, can be served as an appetiser or a main dish with rice. It is widely known throughout Indonesia, although its name differs depending on the location in which it is prepared and the intensity of the spices used: “Gado-gado is a word we borrowed from Jakarta, the town I grew up in; in east or west Java, we call it lotek and in central Java we call it pecel.”

“Why is it popular?” Djumantoro Purbo asked, before supplying the answer: “Because you can have it on the sidewalk, food stalls and even in five-star hotels, not only in Indonesia, but in the neighbouring countries as well.”

However, the ambassador explained that it would be impossible to name one national dish from his homeland because of the number of islands as well as the diversity of the cuisine, different elements of which were brought by immigrants from numerous countries.

Thalib explained that in Sumatra there is a strong influence from India and the Middle East, while a Chinese influence is evident in Java, adding that this is why “in Sumatra you will find most of the dishes contain curry leaves and a lot of coconut milk”. Fresh ingredients are a dominant characteristic in Javanese cuisine: in Java one can find a lot of fresh salt and fresh-water fish. Thalib lists pepes, the meal involving fish mixed with spices and fresh vegetables and wrapped in banana leaves, as one example. Pepes is also prepared using the method of slow-cooking on a grill over charcoal or coconut shells.

It is important with slow-cooking for the meat to absorb all the other ingredients, thus preserving its nutritional value and enhancing the flavours and the aroma, the ambassador and his guest emphasised when discussing the cooking method.

While Indonesians were influenced by the rapid spread of fast-food chains in the 1980s and 1990s, according to the Indonesian ambassador, many people today are rediscovering traditional cuisine: “so it is like returning to the basics. The younger generation now appreciates Indonesian cuisine, including home cooking, more than they did before.”

When asked about his first noteworthy experience with Slovak cuisine, the ambassador recalled that it was in Slovenský Grob, a place known for its traditional goose specialities, served with sauerkraut and potato pancakes.

“I don’t find this in Indonesia,” Djumantoro Purbo said, adding that it was something new for him. “But please do not ask me about halušky.”