The number of students applying for the so-called social scholarship – meant specifically for the disadvantaged – has more than doubled and the Education Ministry now seeks to strengthen guidelines dictating who is eligible. 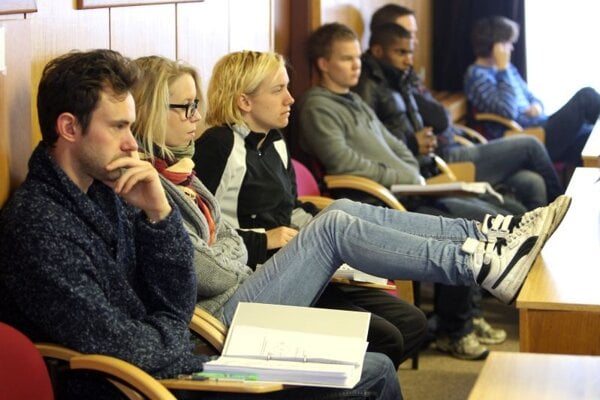 The Education Ministry has reacted to double the number of students applying for social-need scholarships. (Source: SME)
Font size:A-|A+0

The number of students applying for the so-called social scholarship – meant specifically for the disadvantaged – has more than doubled and the Education Ministry now seeks to strengthen guidelines dictating who is eligible.

“Our goal is that system of social scholarships will serve students who are in difficult economic and social situation, not speculators who profit on misusing of rules,” said Michal Kaliňák, Education Ministry spokesman.

Some 400 applied in September 2012 as compared to approximately 1000 students in January 2013. A draft of changes is now undergoing interdepartmental review.

A common scheme to tap the social scholarship funds is for a student to move out of their parents’ home, while claiming they have a bad relationship with parents and thus claiming to need some support from the state. There may be cases when parents and their children plan the whole fraud together, according to TV news channel TA3. Public universities gave €24,789,319 as social scholarships in 2011 to 16,828 students, according to the Report on the State of Education in Slovakia published in March 2013.

One scam scenario, sees a student go to court to officially claim problems with their parents. The court then obliges parents to provide a minimum of €26 per month as a maintenance to their child – if there are two this totals €52, according to a ministry statement. This low level of income for the student, triggers a second welfare provision called the material need benefit, the receiving of which makes students eligible for social scholarships of up to €230 or €275 per month in school year 2013/2014, depending on distance of school from the students place of residence.

The triggering of the material need benefit allows students to claim their income is separate from that of their parents, and in such cases is considered no income at all. As scholarships are granted in amounts inversely proportional to income, the student becomes eligible for the maximum possible scholarship.

The Education Ministry is seeking to make students more clearly demonstrate their real income. It also seeks to close loop holes and force students’ income to be considered in conjunction with the income of their parents whether students live with them or not, a ministry statement said. Thus far courts have been reluctant to consider parental income when assessing material need cases.

“This is one of the reasons why the ministry decided to revise the conditions for approving social scholarships,” Dufeková said.

The proposed change will not affect students who live in common household together with their parents and who still receive material need contributions. Those students will still have the right for the maximum scholarship based on their family’s genuine financial hardship, ministry officials insist. Students with long-term unemployed parents are unlikely to be affected as well, officials say, as provisions are in place to exempt unemployment benefits or statutory sick pays from counting as income if certain conditions are met.