“Shadow of the Past” can evoke mixed feelings

BEAUTIFUL as some of them might be, the works temporarily exhibited at the Jewish Community Museum in Bratislava are viewed through a veil of sadness. The works, among them a Rembrandt, are concentrated in a single room and document the process of “Aryanisation” – the confiscating the property from Bratislava’s Jewish citizens during the wartime Slovak state. 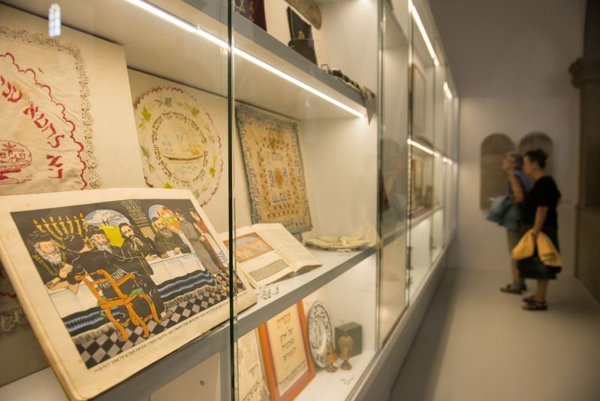 BEAUTIFUL as some of them might be, the works temporarily exhibited at the Jewish Community Museum in Bratislava are viewed through a veil of sadness. The works, among them a Rembrandt, are concentrated in a single room and document the process of “Aryanisation” – the confiscating the property from Bratislava’s Jewish citizens during the wartime Slovak state.

“This exhibition is a side-effect of my research in the work of Eugen Bárkány – whose personal items form the core of the permanent exhibition – which brought me to the State Archives,” said Jana Švantnerová, curator of the exhibition. “There, I was offered a huge set of various documents that were not assorted and explored – and thus, accidentally, I found documents that showed the process of Aryanisation of Slovakia and also the fates of some works.”

Although not numerous, some of the artworks are valuable – both historically and artistically. The most precious Aryanised item is a drawing by Rembrandt van Rijn which was listed in 1943 under the name “In an Oriental Camp” (dated 1641) at a warehouse in Štefánikova Street in Bratislava. Owned now by the Slovak National Gallery, it has been lent for the exhibition – as have some other artworks on display.

During Aryanisation, Švantnerová said, many of the works were gathered in local duty- and customs offices to be later stockpiled by the Finance Ministry. But political situation shook the priorities and the central authorities’ interest in these items declined, leaving the art out of the focus, quickly damaged and later plundered or abandoned. As the customs offices were burdened with the Jewish works and helpless as what to do with them, public auctions were organised in 1944-45. Many were lost forever.

“It also turned out that out of 14 works which were saved and preserved in this process, seven have been owned by the SNG for which I work,” she described. “We were able to exhibit only those whose origin and author were clear.”

The documents Švantnerová used in assembling the exhibition were themselves an accident as an art historian working during the Aryanisation process left them behind in his desk. These lists of artworks have had one big drawback – the original Jewish owners are not listed. They also, however, provide a record of artworks with unknown fates – that scholars will seek to learn more about.

“The only name I managed to find out was Eugen Bárkány,” Švantnerová said. “Which I find symbolic, as it brought me back to the person who was the cause of visiting the archives in the first place. The circle has been completed.” After the war, Bárkány managed to buy back two of the paintings dearest to him, and later sold one to the National Gallery.

The exhibition fittingly takes place in a building still used as a synagogue. Maroš Borský, the head of the museum, was the spiritual father of the museum that opened in 2012.

“The idea behind our museum is rooted in the fact that the Jewish community has lived in Bratislava for as long as anyone can remember and has always been an integral part of its citizenry,” he said. “We want to show people a lesser-known side of our town’s history – the story of the Jewish citizens of Bratislava.”

The museum, opened for public in summer and until October 13 (due to problematic heating of the vast building) on Fridays from 13:00 to 16:00 and on Sundays from 10:00 to 13:00 has a permanent exhibition on one floor and a two temporary ones on the second floor: a photo-exhibition showing synagogues and Jewish monuments in the vicinity of Bratislava, and Shadow of the Past. A third temporary exhibition is planned for the next summer season. For more information on the museum, which is in the Orthodox Synagogue on Heydukova Street, visit www.synagogue.sk.