Festival explores versatility of the organ

JUST WRAPPING up its second year, the Bratislava Organ Festival (BOL) is seeking to renew the 30-year tradition of an earlier festival, the Days of Organ Music. If this year’s event is any indication, it may be doing more than that. 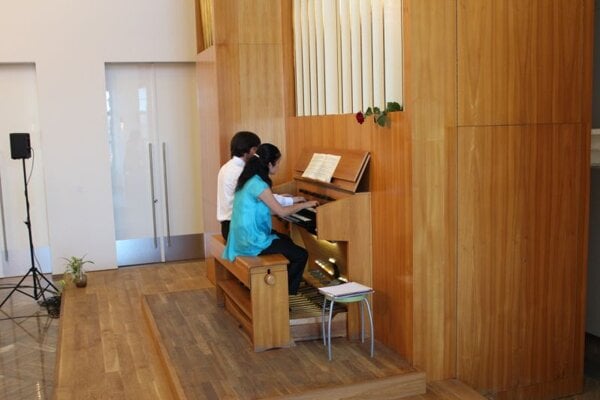 JUST WRAPPING up its second year, the Bratislava Organ Festival (BOL) is seeking to renew the 30-year tradition of an earlier festival, the Days of Organ Music. If this year’s event is any indication, it may be doing more than that.

Much of the July festival took place at the Music Hall in the recently reconstructed Bratislava Castle. Marek Vrábel, the art director of the festival and organist, told the TASR newswire that the aim was to attract also new, young audiences and the wider public. A series of six concerts drew an international array of performers and saw traditional songs mixed with new interpretations and original material.

On July 18, renowned Hungarian organist Lázsló Fassang joined forces with his compatriot Balázs Dongó Szokolay – who has no classical music education, but plays various wind instruments and the bagpipes – to give a “Organ Crossover” concert. The pair played a host of different pieces, from 16th century composition, through works of Béla Bartók to improvisation on folk tunes from the entire Carpathian basin, and jazz. Both musicians have Slovak roots – albeit several generations back with their great-grandparents.

“We have different musical roots and background, but first comes the personal contact,” Fassang told The Slovak Spectator. “I like very much the way Dongó plays his instruments. It is very interesting to follow our different approaches. Dongó plays very intuitively, from inside, and this is a strong inspiration for me.”

Szokolay explained how an earlier collaboration led to the realisation that future cooperation may be in order. “Some people say that organ and bagpipe are siblings,” he said. “After religious conflict in Ireland, many organ builders lost work and they started making bagpipes. Both instruments are very complex, very refined.”

Fassang noted that while the organ is now considered a religious instrument, this wasn’t always the case. “It is maybe the last 500 years that it really belongs to the church,” he said. “There are many things still left that we haven’t explored with the organ.”

“This concert for four hands and four legs is unique,” Vrábel said. “The repertory for such a combination is very limited worldwide, and they play practically unknown pieces in Bratislava.”

Gai said that the idea of playing duets with his wife came naturally, as both were already organists. “We even got engaged and married, so the idea came also on this path,” Gai told The Slovak Specator. “Instead of finding a pal to play football with, as organist I found a beautiful lady to play music with.”

As for keys to picking music for their performances, Yoshida said the selection depends on technical parameters, but also on the audience. For the Bratislava concert, the pair knew they would be able to play Mozart and some contemporary pieces, but not more complex tunes. Yoshida said there are several Japanese musicians who compose music for organ – and it is up to them whether they transcribe traditional songs, which was the case with Sakura, or whether they compose something completely new. “Sakura is a notable piece,” she said, “as it is maybe the most traditional Japanese tune, but the technique, the composition is very European.”

Vrábel agreed that the technicalities of a specific organ and acoustics of the hall are crucial for selecting the right music for a concert. Organisers asked musicians to premiere a piece by a contemporary author and to include music from their homeland. Vrábel noted that the organ at the Bratislava Castle is smaller, thus, the concert of Bernadetta Šuňavská had to be moved to the concert hall in Reduta, the residence of Slovak Philharmonic. Šuňavská, a Slovak organist now living in Germany, performed transcriptions of works not originally meant for organ – making her concert unique in Slovakia, according to organiser Andrea Serečinová.

Other performers at the BOF included Czech Irena Chřibková, and Slovak organist and teacher Imrich Szabó. Erwin Messmer of Switzerland performed “Germanic” music, including the premier of a composition by Morten Gaathaug, who was in the audience.