A NEW Slavonic house at the archaeological site Bojná, opened to the public on July 7, during the Cyril-Methodian Festivities. The site located in the Topoľčany district represents a fortified settlement – one of the biggest of its period in the central Europe. 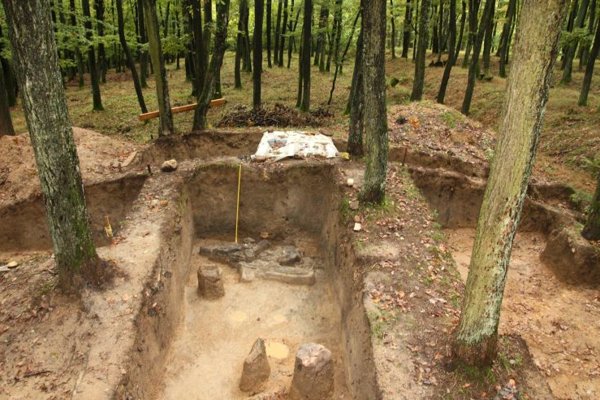 A NEW Slavonic house at the archaeological site Bojná, opened to the public on July 7, during the Cyril-Methodian Festivities. The site located in the Topoľčany district represents a fortified settlement – one of the biggest of its period in the central Europe.

The house is the second settlement reconstructed as a model, according to the remnants of original dwelling called “polozemnica” – meaning a construction half buried in the ground and half erected above ground. Last year, the first such dwelling was made in Bojná – and both stand on the site of original excavated houses. The lower parts of walls, embedded in the ground, are originals dating back to the 9th century.

“These are no liberally-made museum-like reconstructions but rather models of original constructions that were excavated here,” Karol Pieta, the head of archaeological research in Bojná, told the SITA newswire. “The sunken part of the construction was chiselled out of the rocky subsoil and has been preserved very well.”

The above-ground portions are made of wood. This year, it was the municipality of Bojná, state forestry company Lesy SR and several volunteers who contributed to the construction. Archaeologists also plan to build farm outbuildings that will complete the Slavonic dwelling at the Valy excavation site in Bojná. They also want to make the outline of an earthwork fortification.

“We financed the construction from our own resources – as we failed to obtain any grants,” Bojná Mayor Jozef Stankovský told the TASR newswire.

Matej Ruttkay, head of the Archaeological Institute of the Slovak Academy of Sciences in Nitra, told TASR that the current construction means the first phase of a long-term process of making the whole complex of historical monuments available to public.

The Cyril-Methodius celebrations were held beginning July and they hailed the 1150th anniversary of Saints Cyril and Methodius, the brothers hailing from Thessaloniki who brought the liturgies in local language and a special alphabet, Glagolitic script to then territory of Slovakia. The brothers are most connected with the western part of the modern territory of Slovakia, where celebrations were particularly intense.

Some celebrators also paid a visit to the Archaeological Museum of Great Moravia (the 9th century realm lying on the current territory of western Slovakia and southern Moravia) in Bojná where more than 1,000 items documenting the life and work of Slavs in the 8th-9th centuries can be found. By then, fortified settlements in Bojná were the crucial economic, political and religious centre of the Nitra Principality. A festive mass was held at the Valy archaeological site, as well as scenes from the life of Slavs, period music and performances by troupes from Prague and Bratislava.

The settlement in Bojná belongs among the most important localities from the period before and during the Great Moravia, famed in particular for the discovery of rare gilded plaques which are connected to the Christianisation mission, according to experts. The short texts in the plaques are also the first proofs of script among central-European Slavs.