JULIA Smyth, the chargé d’affaires of the British Embassy in Bratislava, says “there is something here for everyone” and notes that even the traditional weaving in Medzilaborce in east Slovakia has been known to draw British tourists. The Slovak Spectator spoke to Smyth about business and tourism links, the benefits the Olympic Games brought to Britain and her country’s planned participation in Slovakia’s largest agriculture fair. 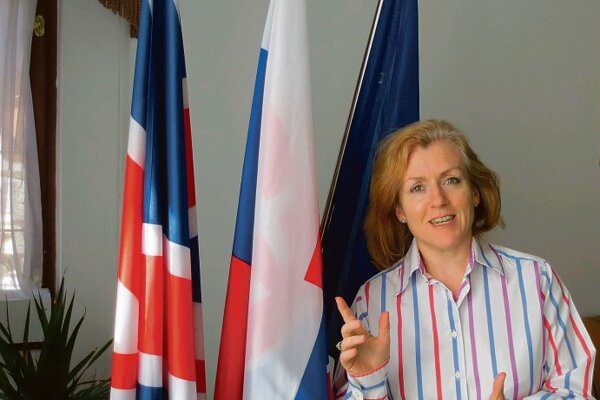 JULIA Smyth, the chargé d’affaires of the British Embassy in Bratislava, says “there is something here for everyone” and notes that even the traditional weaving in Medzilaborce in east Slovakia has been known to draw British tourists. The Slovak Spectator spoke to Smyth about business and tourism links, the benefits the Olympic Games brought to Britain and her country’s planned participation in Slovakia’s largest agriculture fair.

The Slovak Spectator (TSS): The BBC reported the UK economy has seen a 9.9 billion pounds boost in trade and investment from hosting the 2012 Olympic and Paralympic Games. What other benefits did the Olympics bring to your homeland?
Julia Smyth (JS): There is no doubt that London 2012 was a success story for British business. The games created a multi-billion pound business springboard to take British expertise to the world, and the UK Trade and Investment (UKTI) team is working hard to make the most of the significant opportunities. The Olympic Games also delivered a strong social legacy. Last summer, organisers changed the way Britain views volunteering. Since then, thousands of people have been inspired to get involved with their local sports clubs.

The UKTI’s target is to deliver 11 billion pounds of economic benefit from the London 2012 Games by
July 2016, from additional exports, investment into the UK and successful bids for high-value international contracts. They will continue to work to maximise the boost to jobs, trade and investment, strengthening its sector capability with the creation of the Automotive, Offshore Wind and Financial Services Investment Organisations. Activities including the Graduate Entrepreneur Campaign will help to attract the brightest global entrepreneurs to the UK and help UK-based companies to access high value opportunities across the world in sectors such as sustainable cities, urban renewal and sustainable design as well as major sporting events. Preliminary UK annual investment figures announced in May showed that in the year of the Games, the UK maintained its position as the leading destination in Europe for foreign direct investment.

TSS: The UK will participate at the biggest agricultural fair in Slovakia, Agrokomplex (August 22 - 25). What messages does the UK hope to convey to the Slovak audience?
JS: This is the first time Britain is participating in the Agrokomplex fair. We will promote British expertise, products and services in all subsectors of agriculture and food through a “Britain is Great” exhibition stand, displaying company catalogues and samples, with several UK exhibitors directly present. We want to raise awareness of British skills, products and services in agriculture and food and drink sectors with Slovak, regional buyers and end users.
TSS: There is a proposal to hold a referendum on whether Britain should remain in the EU. What is the current sentiment of the British public toward EU membership?

JS: There is growing public frustration that the EU is something that is imposed upon people rather than acting on their behalf – this is being intensified by the very solutions required to resolve the economic problems. People are increasingly frustrated that decisions taken further away from them mean their living standards are slashed through enforced austerity or their taxes are used to bail out other governments.

Eurobarometer opinion polling has consistently shown the UK public has low levels of trust in the EU, but the eurozone crisis has seen the UK overtaken by those countries hardest hit by the economic crisis. The Spring Eurobarometer report shows trust in EU institutions at their lowest ever level, 31 percent. This echoes Pew research published in May indicating that support for the EU has fallen across the continent.

Prime Minister David Cameron has made it clear that he will seek a mandate at the 2015 election to negotiate a new EU settlement, and then hold a referendum with an in/out choice between staying in the EU on the new terms, or exit. He is confident that he will be able to negotiate the right reforms and win that referendum to stay in.

TSS: The impact of new taxes supporting renewable power generation has been a widely discussed issue in the UK. What are the main challenges linked to policies to boost a low-carbon economy and how does your government address these?
JS: The shift to a low carbon future is an unprecedented opportunity for the UK to transform its economy and to ensure the economic recovery is a low carbon led recovery. The vision is for the UK to be at the heart of the multi-trillion pound market that the global low carbon economy will create; where UK businesses are designing, producing, marketing and deploying the goods and services that will shape a low carbon world; where the UK is seen as a global hub for low carbon solutions and the sustainable prosperity the world must move to. The greatest challenges are finding suitable new technologies to meet the changes that need to be made.

TSS: How do you assess the level of current economic relations between the UK and Slovakia? What are the areas of Slovakia’s economy where you see unexplored investment potential?
JS: Slovakia, centrally and strategically located, represents one of the most exciting markets in Europe. British investors have been attracted to Slovakia by its highly skilled and flexible labour force, euro currency, its relatively low costs and high growth. The UK is the 13th largest investor in Slovakia. The Trade & Investment Section of the British Embassy in Bratislava has registered over 100 companies in Slovakia with UK ownership. Tesco, for example, is a top retailer in Slovakia and one of the main employers in the country. Other major UK investors include Shell, Provident Financial, CP Holdings, Amec, Letheby & Sons and Tate & Lyle, as well as BAE Systems, Logica, GlaxoSmithKline and Allen & Overy. We believe there are several areas with greater investment potential including the energy sector, power and gas technologies, nuclear, subcontracting opportunities in the automotive sector, various infrastructure projects, defence and security or exchange of know-how and skills in education and training.

TSS: What is the estimated number of Slovaks who live and work in the United Kingdom?
JS: We don’t have exact statistics on the number of Slovaks currently in the UK. However, we can compare two interesting numbers. In 2004, just before Slovakia’s EU entry, there were 8,000 Slovaks living in Britain. Numbers from a 2011 report estimate that there are around 52,000 Slovak-born nationals living in the UK.

TSS: When it comes to tourism, in the past Slovakia was a popular destination for British stag parties. However Slovakia’s recent statistics indicate an increase in the number of older tourists. Is Slovakia an interesting tourist destination for Britons and what is appealing to the British tourists in your opinion?
JS: Slovakia is a beautiful and interesting country. The British are the sixth most frequent visitors here. My family and I are thoroughly enjoying the wonderful tourist sites and activities. British love to go hiking in the Slovak mountains, to visit castles, various music festivals, and boat trips along the Danube are very popular. There is something here for everyone. I believe that learning traditional weaving in Medzilaborce in the east has even attracted British visitors.

TSS: Have the travelling habits of the Britons changed over the past decade?
JS: Yes. The numbers of travellers to Slovakia increased in the last decade from about 30,000 visitors per year to about 70,000 per year. Low cost air travel has helped to boost these numbers. I believe that we are one of the greatest travelling nations. Someone said to me once that no matter where you go you will always find a Brit. Since the financial crisis British are spending more time visiting the many wonderful sites at home. Britain is after all one of the top 10 most visited countries in the world.

TSS: Bird-watching enjoys a high popularity in Great Britain. How do you see prospects of Slovakia as a destination of bird and wild-life watching?
JS: Not being much of a bird watcher myself, I can however appreciate that Slovakia is an ideal destination for wild-life watching. There are so many forests and vast open spaces with thriving flora and fauna. Perhaps this is something for the Slovak tourist board to exploit in the UK if they are not doing so already.