ENGLISH is the international language and as such it is of little surprise that the main role of the United Kingdom’s education and cultural institution in Slovakia, the British Council, is supporting English-language education. Still, that is hardly all they do, as events in the coming months look to promote British culture and educate Slovak teachers for work with the children of immigrants. 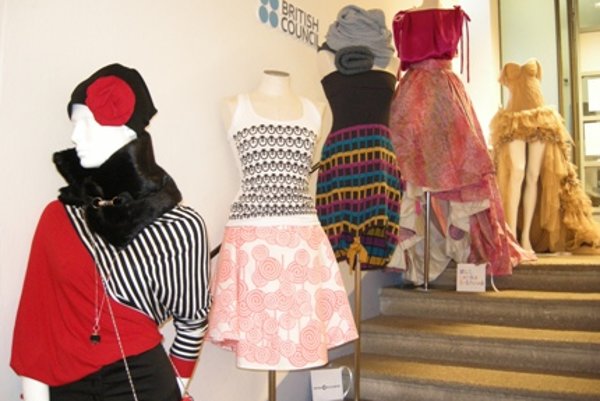 Event of the Slovak Fashion Council, founded by Dana Kleinert - winner of the British Council Young Slovak Enterpreneur in Design - after her professional stay in the UK during London Fashion Week. (Source: Courtesy of the BC)
Font size:A-|A+  Comments disabled

ENGLISH is the international language and as such it is of little surprise that the main role of the United Kingdom’s education and cultural institution in Slovakia, the British Council, is supporting English-language education. Still, that is hardly all they do, as events in the coming months look to promote British culture and educate Slovak teachers for work with the children of immigrants.

The British Council is the partner of the Košice European Capital of Culture 2013 and is slated to participate in an international conference on creative industries and city image, which takes place on October 3 and 4.

“Renowned UK experts are coming, and with colleagues from Slovakia and other countries, will be exploring themes such as what really is essential for prosperous and imaginative places or how your city can be one of those lucky ones where the economy is growing, talent is nurtured and there are few urban or social problems,” said Alena Rebrová, director of the British Council in Slovakia.
Another cultural highlight will be an exhibition called “British Express,” beginning in mid-November is Košice.

“The British Council bought works by British artists early in their careers, so in London we have a number of extraordinary works from the mid-20th century by Lucian Freud, Henry Moore and Ben Nicholson, amongst others,” Rebrová said.

Bratislava residents can enjoy the “iTMOi (In the Mind of Igor)” ballet that opens the season at the Slovak National Theatre. It was written by Akram Khan, the co-author and co-performer of the Opening Ceremony of the London Olympics, who also choreographed the recent Kylie Minogue world tour. The ballet was inspired by Igor Stravinsky’s “The Rite of Spring”.

Another event to look forward to is tied to the celebration of the centenary of the English composer Benjamin Britten, which will be marked by the Konvergencie Festival (on September 20 in Bratislava) as well as on other occasions in performances by the Symphony Orchestra of Slovak Radio and by the Slovak State Philharmonic in Košice.

While there remains much culture to celebrate, the British Council does still remain focused on language courses and UK qualification certificates. The situation for Slovak students has been complicated by a recent amendment that sees even students qualifying for an internationally recognised certificate as nonetheless still needing to pass the secondary-school final exam in language.

Rebrová insists this change has little effect on the British Council’s emphasis. “In today’s world, it is a great advantage for students to have an internationally recognised certificate confirming their language level,” she said. “The current worldwide trend in education is its internationalisation and young people’s ability to communicate in a foreign language becomes an absolute necessity.”

“We will continue offering UK qualifications,” Rebro-vá added. “Our headquarters in London have developed numerous high quality online materials for learners and teachers of English, including mobile applications for those wanting to improve their English. Making these available and showing teachers and students how they can benefit from using these is our core business.”

If you are a big fan of British music, the British Council regularly brings the Selector Radio Show, hosted by Daniel Baláž, to the airwaves. The show is on each Saturday between 20:00 and 22:00 on FM Radio. Fans of all genres of music tune in to hear everything from indie rock, to dubstep, folk, soul electro and everything in between. The Selector presents not only music, but also interviews, mixes and exclusive live sessions from some of the most exciting British artists.

The British Council, together with their informal partner Milan Šimečka Foundation, launched a project in June 2013 which is aimed to increase the qualification of primary teachers in the area of migrant children education. Ten primary schools will meet with UK teachers and experts to share their experience. “The UK has a lot of experience in the area of educating children of migrants,” Rebrová said.

The British Council has a full calendar of events in Slovakia with many more to come. More information on the Council’s activities, upcoming events and updates can be found on their web-page and Facebook.

“We work in the way of projects which usually last one to three years,” Rebrová said. “One of our roles is to raise awareness of issues, inspire and bring new ideas.”