DRAWING private investment to spur renewable energy remains a challenge, says British Secretary of State for Energy & Climate Change Ed Davey, and governments have a role to play in creating a stable energy market. The Slovak Spectator spoke to Davey about his July visit to Slovakia, the challenges of creating a low carbon electricity market and the future of nuclear energy. 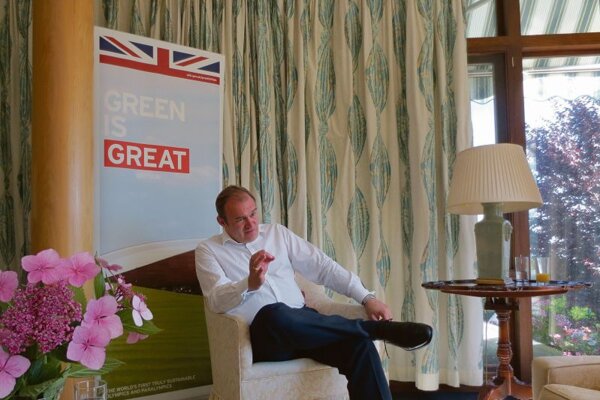 DRAWING private investment to spur renewable energy remains a challenge, says British Secretary of State for Energy & Climate Change Ed Davey, and governments have a role to play in creating a stable energy market. The Slovak Spectator spoke to Davey about his July visit to Slovakia, the challenges of creating a low carbon electricity market and the future of nuclear energy.

The Slovak Spectator (TSS): What are the main outcomes of your trip to Slovakia?
Ed Davey (ED): I came to Bratislava to share thoughts on energy and climate change matters and explain what we are doing in reforming the electricity market, because we want to make sure we can keep energy prices affordable while we de-carbonise. There have been some failed policies in Europe, in my view, which haven’t delivered the de-carbonisation effectively or affordably. I also wanted to talk about how we can work together on the EU level.

There are some specific areas like nuclear energy where we are looking at nuclear safety or looking at commercial cooperation to develop new nuclear resources, where Slovakia and the UK are very strong. We looked at 2030 targets for energy and climate change which should be debated in the EU. These should be ambitious and technology neutral. We also talked about the reform of the EU emissions trading system. There are huge areas where Slovakia and the UK can cooperate. When I was listening about energy challenges in Slovakia I saw a lot of parallels. We basically agreed that we should meet again and try to work together through these issues.

TSS: In a recent interview you said that the United Kingdom will become the first country in the world with a low carbon electricity market. Is this a realistic ambition?
ED: It is realistic. The last major reform to our electricity market was more than 30 years ago. When we liberalised our electricity market we privatised and we were the world’s first to do it on that scale. Everyone said it wouldn’t work and it did. This is the next big reform and in the meantime we are realising that if you are going to go low carbon and do it in cost effective way you need to get the market working. If you do it only by regulation and state interventions you are likely to do this at a high price. We need to move away from inefficient policies. The problem with electricity markets is that you cannot change them overnight and you have to have a long-term framework, which will give investors certainty and stability as you are asking people to invest billions of pounds, billions of euros. So our reform to get the world’s first ever low carbon electricity market won’t happen overnight, it will happen gradually and will take about 10 years.

TSS: What are the challenges of this plan?
ED: The biggest challenge in any energy sector is to get the investment, because the state can’t afford to do it all on its own and the private investors will only invest when they feel that they can trust the government – that electricity environment is stable and the terms are predictable. As we go low carbon we also want to keep lights on and we will see 20 percent of our power go out of service in the next 10 years. We are going for huge investments, bigger than we have done for decades and attracting that investment will be our biggest challenge.

TSS: Your department has launched several initiatives to help increase energy efficiency. What has been the response of the households and businesses?
ED: They are very much about changing behaviour and are about reducing demand. We often talk only about the power supplies side, but we need to think about the demand side as well. If people can insulate their homes better they are consuming much less energy. If their appliances are more efficient they could reduce their energy bills. Through smart meters they can understand how to use their electrical appliances better and thus save a lot of money.

In terms of generating electricity, we have a whole set of policies with something called capacity market and some measures. The combination of that will help us to keep lights on. There have been some headlines in UK press pointing out that we had to do something and we have been doing it already for two years and we do have a good answer for that [challenge]. The second type of energy security is about making sure that you have sufficient energy coming in and in the UK we need to make sure we have sufficient gas supplies. Up till now we were able to use most of it coming from our own North Sea suppliers, but that is going down fast so we have to import a lot more gas. How we do that is critical. The third issue is making sure you distribute your petrol, diesel and oil effectively. We had to take measures to make sure we can do that.

TSS: What is the energy mix in your country?
ED: Just looking at electricity, we have got about 40 percent coal, about 25 percent gas, 15-20 percent nuclear and the rest are renewables, which are going up. Previously, we had less coal and more gas, but because coal prices went down we have seen this shift from gas to coal – which is the reverse of what we want to achieve. We want to shift away from coal to gas and thus we have quite a lot of work to do.

TSS: Slovakia continues to focus on nuclear power. What is the status of nuclear power in the UK’s energy plans?
ED: We produce about 20 percent of electricity through nuclear and we will see a lot of our old nuclear power stations close in the next few years, so if we do nothing the amount of our nuclear power will fall dramatically. Thus, we are going to build more nuclear power stations and we are going to try to do it in a market-based way. We are engaging in a very ambitious nuclear programme and we believe that we can replace a lot of old nuclear with new nuclear. The British public is generally supportive. It prefers renewable, there is huge public support for renewable, but there is also a majority with faith in nuclear.

TSS: Green energy has lost public support in Slovakia after the extensive state support to photovoltaic power stations increased energy bills. What is the experience of the UK in boosting renewables without raising energy prices?
ED: We had bad experiences with solar because the cost of producing solar photovoltaics went down, but subsidies stayed high and some smart people were making a lot of money very quickly and the bills were being picked by consumers. So we reformed the system. We are still supporting solar, but probably at the slightly slower rate and at much lower cost. It is true to say if we are going to have renewables it is going to cost a little money up front. But it was interesting to see the cost of solar and wind come down so quickly. To my mind, they will soon be competitive to nuclear. So we should keep renewable in the mix and just because we had some bad experiences we shouldn’t say that will always happen.

TSS: You consider emissions reduction targets at 20 percent by 2020 set back in 2008 as not ambitious enough. What would you consider sufficient?
ED: The UK government has been arguing and we are still arguing that we should increase the 20 percent target to 30 percent target for 2020. I think that with just a little more ambition in Europe we could lead the world again - we could get our car emissions down by 30 percent by 2020. That would be actually good for growth because we will see more money invested in low carbon technologies.